Tesla's Elon Musk gets credit for inspiring the character Tony Stark from Iron Man, but some say Daniel Kim of Lit Motors is more deserving. "Unlike Musk, Dan can actually build stuff," says investor Ted Loh. "We'll probably see him flying around in an Iron Man suit one day because he just decided to build one."

Such praise comes thanks to Kim's San Francisco-based startup and its groundbreaking take on the motorcycle, the electric C-1. Lit Motors has pulled in more than $1 million in angel funding from Loh and other engineering-minded investors, attracted by Kim's use of dual stabilizing gyroscopes that keep the bike upright on two wheels, whether it's stopped at a traffic light or broadsided by a pickup truck at 35 miles per hour. "There's nothing new behind the concept," Kim says. "Think of a spinning top and how it stays upright when it's bumped. It's common sense; I just applied it to a motorcycle." 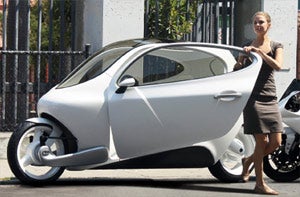 The enclosed motorcycle (Kim refers to it as "driving your helmet") is powered by an 8 KwH lithium battery pack that takes about a dollar's worth of electricity to fully charge, for a range of more than 150 miles. The bike has a top speed of 120 mph and sports-car-like acceleration.

Lit Motors has more than 600 pre-orders for the $24,000 bike, which qualifies for up to $6,000 in tax credits for its energy efficiency, allowing it to compete on price with high-end BMW and Harley-Davidson rides.

A former Land Rover mechanic who studied physics and biology at Reed College, architecture at UC Berkeley and industrial design and sustainable transportation at Rhode Island School of Design, Kim started Lit in 2010, a year after he graduated. As he sees it, his diverse background is an asset. "The likelihood that anyone in the automotive world can be the vehicle architect, program developer, CEO, mechanical engineer and actually build a car is rare," he says.

Loh, who formerly worked in operations at Facebook, agrees that Kim's unique abilities are key to his success. Loh poured an undisclosed amount of money into Lit Motors in 2012 because "there are so many applications for his gyros, like car manufacturers licensing it to make SUVs that can't roll over," he says. "If it catches on as a widely used safety feature, it'll be huge."

Kim claims that in recent months, several well-known international transportation and tech companies have inquired about licensing his gyro system. (He declined to name them.) He welcomes the interest but refuses to lose sight of his goal: manufacturing the first run of 1,000 C-1s and getting them on the road--and securing $10 million in funding to help him scale up production to do just that.

When asked whether San Francisco is the optimal place to build motorcycles, Kim responds, "Yes, for now. I see a need for the C-1 every day I go to work, and that keeps me focused."

Fuel Shortage Hits Southeast U.S. As Colonial Pipeline Works To Get Back Up

An Overview Of The Current DeFi And NFT Aggregator Space

Wendy’s Needs More Clarity Than an Earnings Report Can Provide