It took eight months and dozens of prototypes before Bayard Winthrop, CEO of online apparel company American Giant, settled on the design for the ultimate hooded sweatshirt. He started from scratch, hiring creative director Philipe Manoux, a former industrial engineer at Apple, and world-renowned pattern-design engineer Steve Mootoo to rethink every aspect of the traditionally bland wardrobe staple.

A partial list of enhancements: reinforced elbow pads; a double-lined hood; custom hardware; a carefully calculated spandex percentage woven into the cuffs and waist to hold shape and elasticity; a "dry hand" feel, achievable when premium cotton fabric has been napped, or run through machines that pick out tiny loops of thread to give it extra softness and lift; and most noticeable, a fitted shape, thanks to side paneling and shoulder ribbing that eliminates the boxy, slouchy silhouette of most hoodies and allows for easier mobility.

"I don't expect people to know the sum of all the parts, but I expect them to pick it up and be able to feel a difference in quality," Winthrop says, noting that American Giant's heavyweight hoodies retail for a sensible $69 (the zippered version for $79), comparable to lesser-quality shirts from brand-name retailers.

It may not go through the blink-and-it's-gone whims of women's clothing trends, but the once-monotonous world of menswear is experiencing plenty of innovation. Here's a look at some companies that are revolutionizing a key sector of the U.S. apparel business, from refining domestic manufacturing processes to enhancing the shopping experience for consumers.

Here's where it gets really interesting: Winthrop guarantees that no matter how big the company gets, its apparel will always be made in the U.S. and will be sold at competitive prices, thanks to the direct-to-consumer business model, which circumvents retail markups. "I always felt that if you wanted to buy a U.S.-made product, you had to tolerate either high prices or shitty quality," he says.

Winthrop draws a distinction between American Giant and small shops that sell prohibitively expensive denim, and American Giant and the likes of American Apparel, with its dubious construction and materials. "We are trying to solve the problem of consumer access to quality apparel and start a revolution in domestic manufacturing by building a scalable company," he says.

Winthrop is in his old Toyota pickup truck, headed to SFO Apparel, where American Giant's line of men's sweatshirts, tees and sweatpants is manufactured. He keeps up a steady stream of banter and jocular conversation on the way to the factory site in Brisbane, Calif., a pleasant 15-minute ride south of American Giant headquarters in San Francisco's Mission district. He says he chose the factory, whose other clients include sportswear companies Under Armour and Tyr, for the can-do attitude of owner Peter Mou and the technically skilled labor force--mostly middle-age Chinese women working on rows upon rows of sewing machines alongside massive boxes overflowing with knitwear in various colors and phases of production.

It was roughly three years ago that Winthrop, a serial entrepreneur who has headed a number of manufacturing and consumer-products businesses (most recently bag, footwear and apparel company Chrome Industries), became convinced there was untapped opportunity in the made-in-the-USA apparel movement. Not only that, but consumers--especially men--were migrating toward online shopping at a rapid rate and beginning to spend on quality over fast fashion. It seemed obvious to Winthrop that the sweatshirt was a great candidate for reinvention.

"It's the ubiquitous American silhouette, and nothing in the category stood out," he says. He left Chrome to start American Giant, on a mission to find the right partners for the cause. 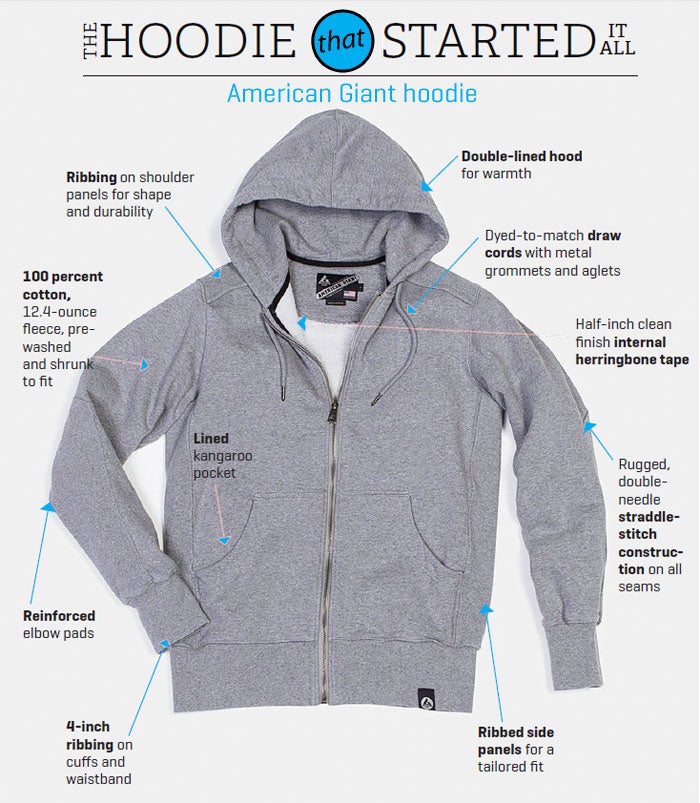 The hoodie that started it all - the American Giant Hoodie

Given the sheer quantity of inventory on view at the factory, it's difficult to imagine that the biggest problem for the business has been meeting demand; in fact, it wasn't until May that the company finally caught up on a massive order backlog from December 2012, after Slate columnist Farhad Manjoo wrote a story breaking down how American Giant had created "the greatest hoodie ever made."

"The story went viral, and we did $600,000 in sales in 36 hours. We sold out of everything, down to the shelves," Winthrop recalls. "When I called our e-commerce folks the morning the article was published, they said 75 orders had come in in the 30 seconds since I called, and it accelerated from there." Ironically, the previous week he had been worried about overbuying for the holiday season.

Patrick Chung, a partner at global investment firm NEA, believes this tale is indicative of a renaissance in U.S.-based manufacturing. "The reason fashion manufacturing went abroad was for cost, and because we could not scale in an efficient way inside this country," he says. "But competition has shifted because of technology, and you have innovators who are maniacally focused on design and want to maintain as much control as possible to produce a product they can be proud of."

It seems Winthrop had the right idea by launching his business with men's clothing. "Menswear is starting to develop its own legs, and we're only in the second or third inning of where it's going," says Hil Davis, co-founder of J.Hilburn, which has brought custom-tailored clothing into the digital age, disrupting retail prices with a blend of in-person style-advisor meetings and a direct-to-consumer distribution model. In the past six years the company has amassed more than 100,000 customers, revenue upward of $55 million and an enviable product return rate of only 5 percent.

Davis, however, believes that the made-in-the-USA movement has serious limitations--particularly a puny domestic supply chain crippled by an unskilled labor pool, at least when it comes to custom manufacturing. "We tried to launch with a U.S. product, but the total capacity was 7,000 shirts, and we make about 15,000 a month," he says. "There's not enough factories, workers or equipment, so it won't work unless someone is willing to make a massive investment … and I don't know who is going to step up."

After watching the American Giant inventory get "sucked through" in December, Winthrop was forced to make big bets on a supply chain that wasn't completely proven. Now he's exploring various solutions to maximize long-term capacity. But he's confident that a revival of domestic manufacturing is possible.

"There's a misunderstanding about the robustness of U.S. manufacturing," he says. "People forget that our manufacturing base is still the largest in the world from an output stance. Those who have emerged from the gristmill are highly efficient, nimble and innovative. What you will see in China is poor machinery and a big investment in labor; the opposite is true in the U.S."

For example, American Giant partners with Carolina Cotton Works in Gaffney, S.C., a mill that exports 75 percent of its product and is considered one of the most modern yarning facilities in the world. Together, they deconstructed a premium yarn for the American Giant hoodie that was previously available only from India. "Now they produce it here, and it's cheaper. Within 100 radial miles, cotton is grown, finished, dyed and sewn," Winthrop says.

It's easy to see why he's bullish about the future. American Giant launched a women's line in May; the growth forecast for 2013 is 10 times greater than last year; production capacity is 20 times what it was in December; and the company is beating its own sales projections. At press time, Winthrop was narrowing in on a location for a new office at least triple the size of the existing 1,000-square-foot headquarters, to provide enough room for the team (now numbering 15) to grow. In his mind, all the repeat customers and emotional letters and e-mails are evidence that people have been waiting for a company like American Giant.

"When I was 8, I would wear something my mom could afford that would last 10 years. That idea is what we stand for, and we have a clear vision of investing in American manufacturing and delivering through this paradigm," he says. "I feel more strongly about it [now] than I did when I started the company."