Scents and the City: Meet the Woman Who Captures Neighborhoods Through Smell

It may be hard to believe that an entrepreneur could build a multimillion-dollar business inspired by the smells of New York City, which is not necessarily known for its olfactory charms. But that’s what Laurice Rahmé has done.

Originally from Paris, Rahmé spent 10 years at L’Oréal before starting her perfume brand, Bond No. 9. “We launched because of 9/11,” she says of her company, which is headquartered on Bond Street in Manhattan’s NoHo neighborhood. “NoHo and all of downtown were so affected by the events of that day, and we wanted to make New York smell good again. It was a highly emotional time, but my idea was to map out every neighborhood and attach each one to a very different scent.”

In the years since, Rahmé has created edgy and whimsical perfumes for men and women, all blended in New York by handpicked French perfumers and each recognizing a specific city locale, from Harlem to Wall Street and Madison Square Park to the High Line, the transformed elevated rail yard she “perfumed” five years ago.

“New York City is always renovating or reinventing a neighborhood,” she explains. “But my goal is to see what’s next. I read everything I can about a neighborhood before I even begin.” Her process takes a year and includes several sit-downs with a perfumer to finalize the scent. For the High Line fragrance, she thought of the history of the neighborhood and “studied the herbs, the grasses, the tulips and everything planned for the park.”

This fall, Rahmé debuted B9, which serves as a modern tribute to the perfumerie’s original location. That 3,000-square-foot store remains the flagship (and the largest perfume store in New York, according to Rahmé); the company has three other boutiques in Manhattan and one in Sag Harbor, N.Y. Bond No. 9 products are also distributed through 2,000 wholesale outlets worldwide. One key collaboration is with Saks Fifth Avenue, which has carried the collection since launch. “Saks took the brand right away,” Rahmé says. “They thought it could expand all over the country, which it did.”

In fact, in the past five years, Bond No. 9 has gone global, seeing substantial sales in the U.K., Asia, Latin America and the Middle East. The company, now a team of 100, generated revenue of $50 million last year, which Rahmé considers small compared to her fragrance competitors.

“We’re a serious small company,” she says. “I like it that way. We only do what we believe in, and I want 100 percent creative control -- I don’t want to have to report to investors.”

That control extends to the customer. In her boutiques, Rahmé aims to create a modern, luxurious but unintimidating shopping experience. The shops are airy, glittery spaces that feel almost like you’ve entered your best friend’s living room. “At our boutiques, you can have a cup of tea from our tea bar or you can browse our books on perfume and New York,” she says. “We want to provide the opposite of a department-store experience.”

Another draw is the fact that customers can create their own scents, with the help of staffers referred to as Bond Perfumistas. “Our customers end up spending an hour or so in the shop creating their own scent,” Rahmé says of the custom blends, which can cost from $500 to more than $2,000 a bottle.

Rahmé has also sketched out a highly specific social media strategy. “We share New York City on social media,” she says of the content created for her nearly 7,000 Twitter, 16,600 Instagram and more than 100,000 Facebook followers. “Our customers already know our product, but not all of our fans live in New York City, so they want news of our neighborhood. They want a taste of what’s happening here.”

That’s why the core of the business will always be the city-inspired scents. “We have a lot to cover in New York City alone,” Rahmé says. “Plus, everyone loves New York!” 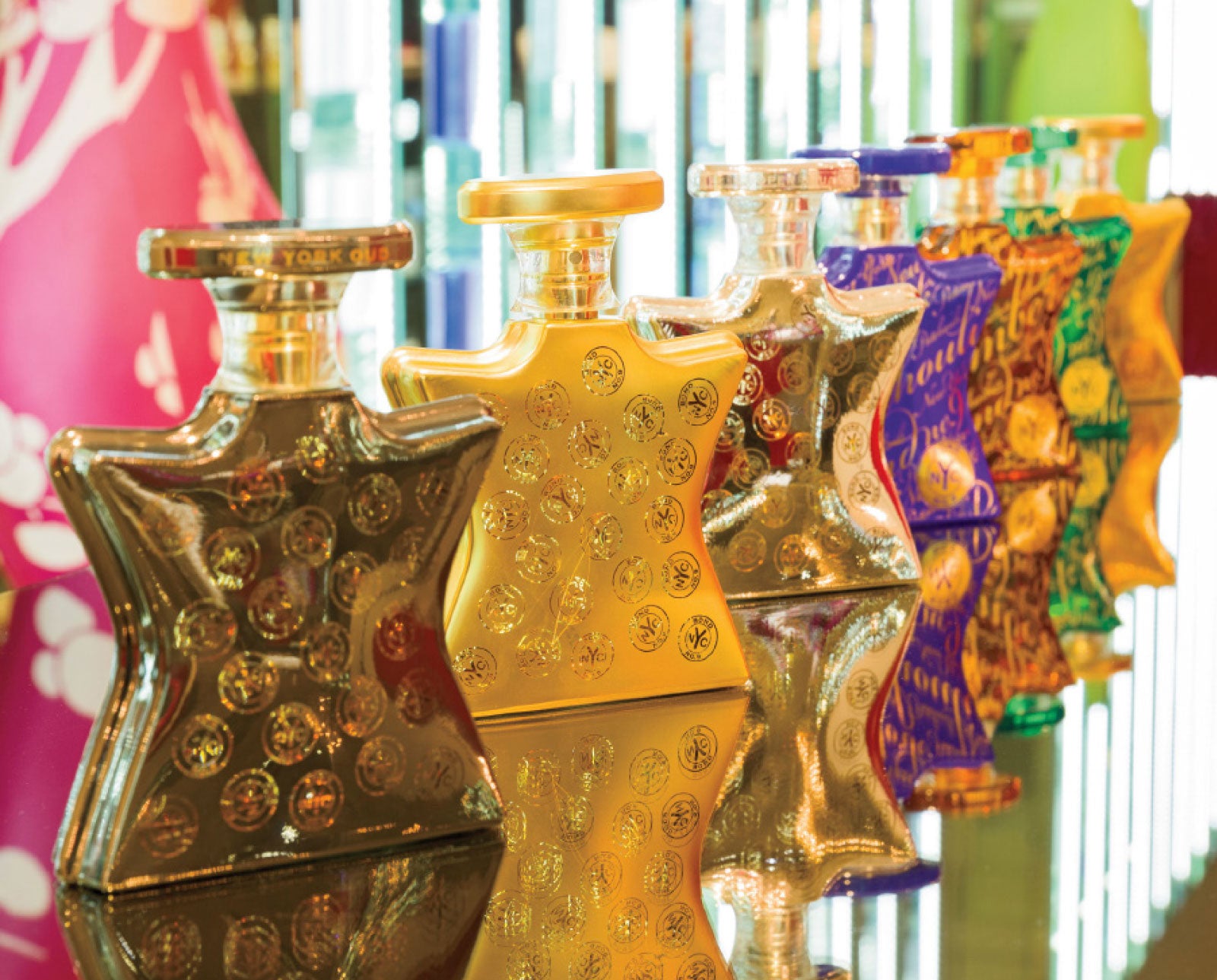 When Laurice Rahmé launched Bond No. 9, she had already conceptualized a bottle that would be just as memorable as the distinctive fragrances that would be contained within.

After meetings with several of the world’s finest glassmakers, most of whom couldn’t create the hefty, curvy glass bottle she had in mind, Rahmé partnered with Luigi Bormioli of Parma, Italy, to develop a perfume bottle that would be unmistakably Bond No. 9.

“I designed the bottle like you’d design a person,” she says. “You have the head, neck, shoulders and waist. I thought that if I made a bottle like a human being, I could dress it up like a person.”

Rahmé’s aim was to stand out from the competition. “All the packaging in the fragrance industry was becoming minimalist and functional,” she says. “I wanted to bring some artistry to it. While some people prefer a square or circle bottle, I wanted something out of the ordinary. Every company should try to create unique packaging with a unique message.

“There has to be a considerable point of difference between your product and others in the category,” she adds. “If you have a ‘me too’ product, it will be hard to sell it. Consumers are spoiled -- you’re only going to attract them if they fall in love with what you’re selling.”

And many do. In fact, Rahmé refers to her customers as collectors, citing some who have 40 bottles of her fragrances.

“No one will want to smell something that doesn’t look good,” she says. “You have to have that attraction first. We wanted our perfume to be different enough that customers couldn’t help but look at what was inside.”