The steps to take when everything is on the line.
Next Article

Schedule a FREE one-on-one session with one of our Franchise Advisors today and we’ll help you start building your franchise organization.
May 18, 2017 7 min read
Opinions expressed by Entrepreneur contributors are their own.

It's easy to blow it in the heat of closing a big deal. These highly successful entrepreneurs—and members of The Oracles—share how to make your negotiations smoother, more profitable, and how to get that handshake and signature on the dotted line.

1. Prospect, build a pipeline, and be omnipresent.

I've been fortunate to close significant deals in my career. Some launched businesses, while others transformed good businesses into great. In my experience, there are four steps to emphasize:

One, list the big-deal companies or players you want to work with. Know their pain points and what matters most. Create content that demonstrates how you will solve their problems faster, with higher service levels for less cost. Knowing the revenue value of one deal makes it easier to reverse engineer what to spend on your prospects annually. 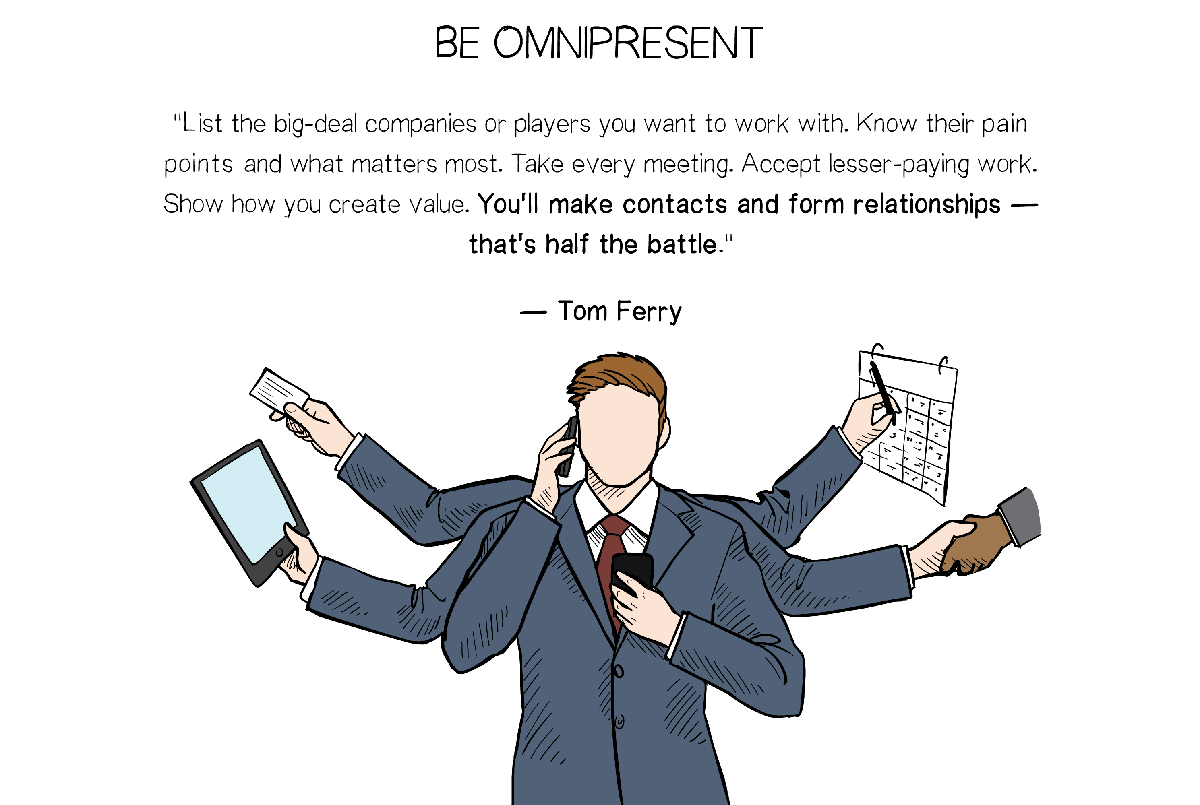 Two, build a pipeline to nurture opportunities. Take every meeting. Accept lesser-paying work to demonstrate how you create value. It doesn’t always work out, but big-deal decision makers eventually take notice. You'll make contacts and form relationships—that's half the battle. And always ask for testimonials!

Three, do something big every year to stay at the forefront of your prospects’ minds. While grinding on your everyday business, stay abreast of significant opportunities with those dream clients. (I use Contractually.)

Finally, become recognized as an industry authority and push those wins on social media. It can be big or small, like writing an acclaimed white paper or winning a local business award. Stack up the awards that recognize your team and product. Bottom line: big companies that do huge deals want to work with winners. —Tom Ferry, founder and CEO of Tom Ferry International, ranked the number-one real estate coach by the Swanepoel Power 200, and NYT-bestselling author of “Life! By Design”

When closing a deal of any size, communicate clearly and confidently. Otherwise, people won’t trust you. (I practiced using recorders and video for years to ensure my communication came across the way I intended.)

“Where there is a will, there is a way.” I always believe that we can come to an agreement, no matter what the buyer or those around me say. The mindset of knowing you will reach an agreement requires you to eliminate all negativity from your environment like negativity is a lethal disease. 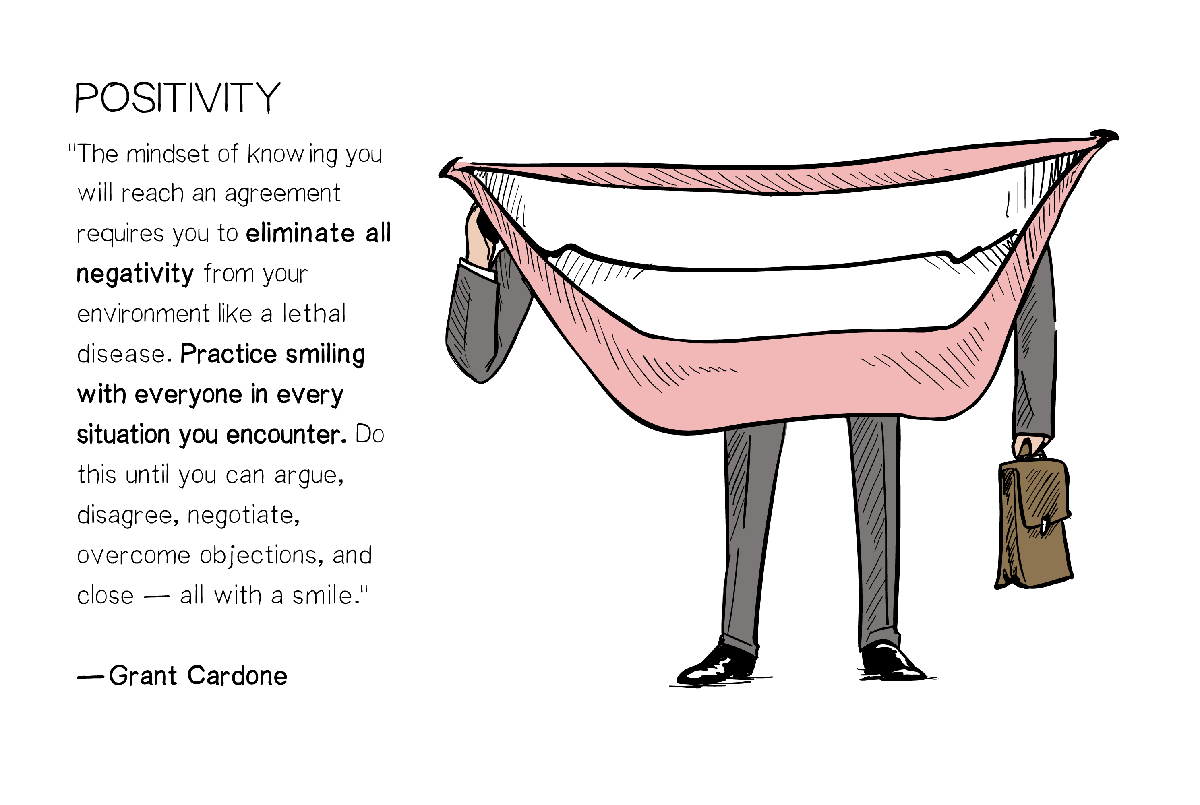 My priority is to always remain positive. No matter how the buyer responds, keep it light, always smile, and maintain a can-do attitude throughout the negotiations. When you succumb to negativity—yours or the buyer’s—there’s only one outcome: not good.

Practice smiling with everyone in every situation you encounter. Do this until you can argue, disagree, negotiate, overcome objections, and close—all with a smile. —Grant Cardone, top sales expert who has built a $500-million real estate empire, and NYT-bestselling author of "Be Obsessed or Be Average”; follow Grant on Facebook or YouTube

One of the things you have to understand is that school doesn’t prepare us for doing deals. Here are three tips I've learned:

One, if your initial offer is accepted, you probably didn't negotiate enough. Don't be upset if they don't accept your first offer—it's a bad sign if they do accept.

Two, the counterbalance—don't always look to get the best deal. The billionaire Warren Buffett says it's better to pay a fair price for something quality than dirt cheap for a piece of crap. Sometimes I've waited too long to negotiate different business deals and ended up with nothing. It's better to pay a little more to possess some real investments. 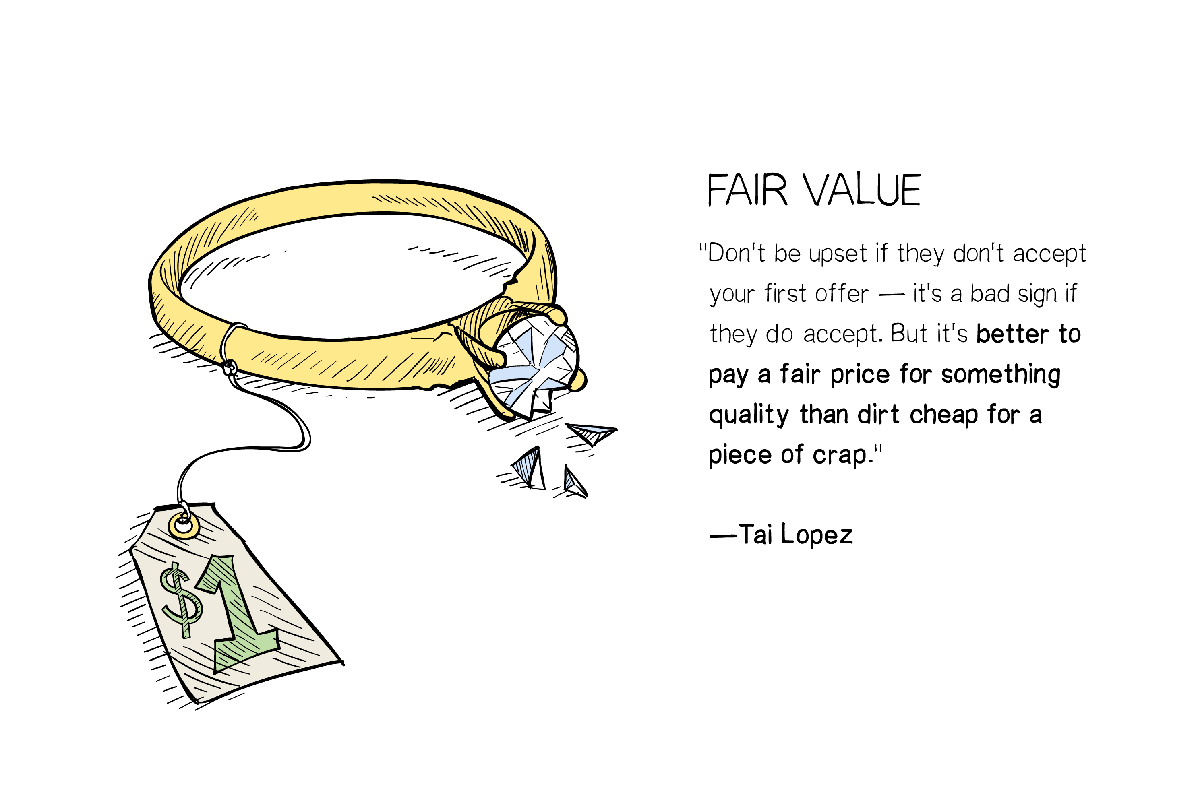 Three, make war with a multitude of counselors. I hire lawyers to spot things that I might miss. One of my first business partners said, "You wouldn't believe how many people sign anything without reading the fine print or addendums." Know what you're signing. Head outside, lay by the pool, read the contract in a relaxed way, and let some other people look over your shoulder. —Tai Lopez, investor and advisor to many multimillion-dollar businesses who has built an eight-figure online empire; connect with Tai on Facebook or Snapchat

As part of growing my previous company, MavenWire, I negotiated and closed six-, seven-, and eight-figure deals. Some were easy, closing in days; others were difficult, taking months. We always reached a mutually beneficial agreement that strengthened our relationship. This became especially important when negotiating MavenWire’s sale in 2016.

Here are the three things to remember:

One, getting what you want begins before the deal. Negotiating and signing a contract is a small part of the whole process. Enter into deals with people you have a relationship with, or create a situation to get to know them beforehand. This provides a foundation of trust and empathy to begin negotiations. 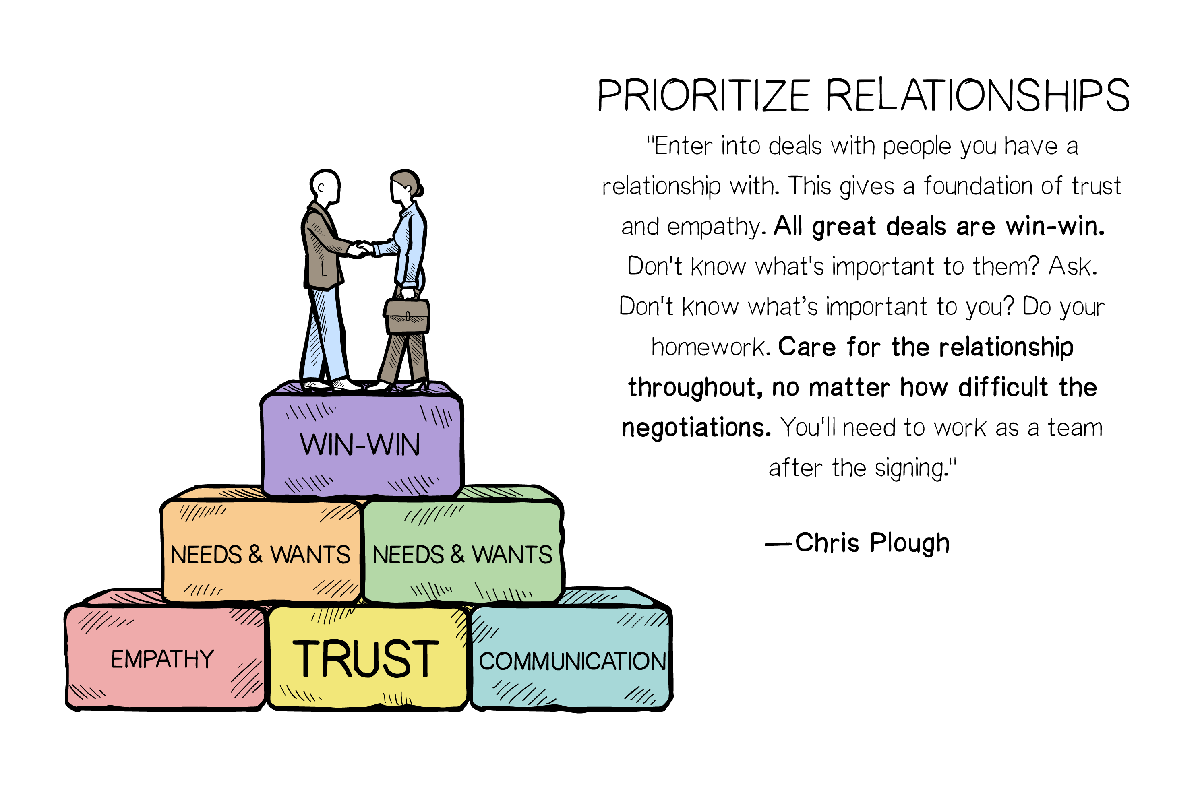 Three, you'll need to work as a team after the signing. So, care for the relationship throughout, no matter how difficult the negotiations. A strong relationship carries you all through tough times and influences your success. A contract is just a written understanding of the agreement; work with the right people and you’ll rarely, if ever, have to enforce it. —Chris Plough, author, speaker, advisor, and founding partner of exponentialU; he equips epic entrepreneurs for the world that’s coming

5. Remember, walking away can lead to even bigger deals.

I remember the head of Paramount Pictures was shocked when my company decided to walk away from Transformers 3. “Who would do that?,” he wondered. After all, each of these movies makes a billion dollars.

But, for me, the first two Transformers movies represented four years of my life. Money is great, but my time is more valuable than money. You can’t get time back, and we all have a limited amount of it here on Earth. So, I walked away, to the shock of everyone involved. 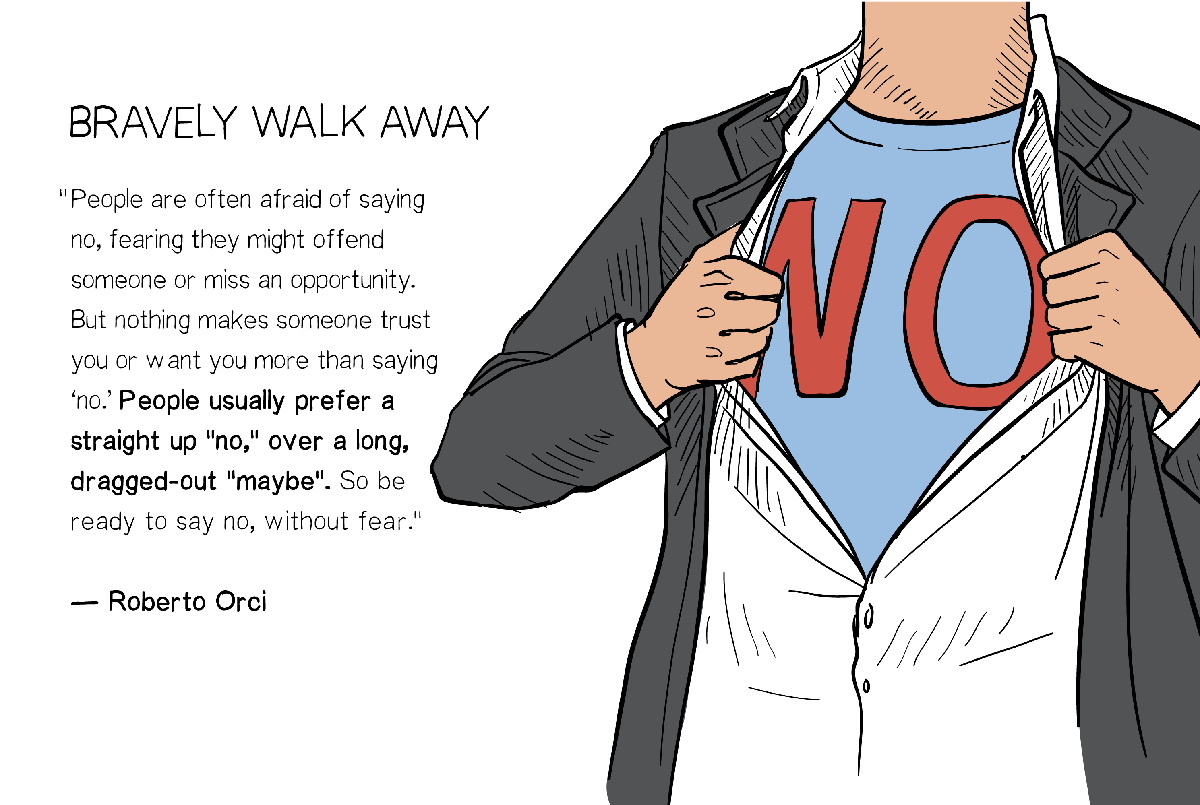 People are often afraid of saying no, fearing they might offend someone or miss an opportunity. But nothing makes someone trust you or want you more than saying "no.” People usually prefer a straight up "no," over a long, dragged-out “maybe.” And we’re inclined to want something that’s no longer available. Passing on Transformers 3 teed up different, very lucrative deals that were a better fit with the time I wanted to allocate. So be ready to say no, without fear. — Roberto Orci, Hollywood super producer and screenwriter whose movies and TV shows have grossed over $5 billion worldwide

The Most Challenging Dynamic in Multi-Million-Dollar Negotiations

5 Negotiating Lessons Entrepreneurs Can Learn From the Government Shutdown

Never, Ever Make This Mistake Negotiating an Offer

Hone Your Sales and Negotiation Skills with This $11 Online Class