Half of the 1,000 managers surveyed by GetApp, a Gartner company, admit that their company still has 'significant work' to do in this regard.

Companies who have adopted systematic approaches to inclusion and diversity are now “more likely than ever” to outperform less diverse peers on profitability and other key measures of performance.

However, businesses in many parts of the world, including in developed countries, are still dragging their feet to build an inclusive, diverse culture.

A recent study by GetApp, a Gartner company, shows that small and medium businesses in the United Kingdom have a long way to go to improve rates of diversity and inclusion, with 51 percent of managers admitting that their company still has “significant work” to do in this regard.

“The data reveals many UK SMEs are still lagging in terms of initiatives to promote diversity and inclusion as well as policies in place to prevent discrimination,” Sonia Navarrete, senior content analyst at GetApp, said in comments to 150sec.

“The survey reveals that 82 percent of managers claim diversity matters to them. Of that proportion, 52 percent say it matters a lot and 30% say it only matters a bit, leaving 15 percent that claim it is not important,” GetApp wrote in a press release.

For the purpose of the study, GetApp—a recommendation engine that helps small businesses make the right software choice—surveyed 1,000 managers and directors from companies with 250 employees or less. 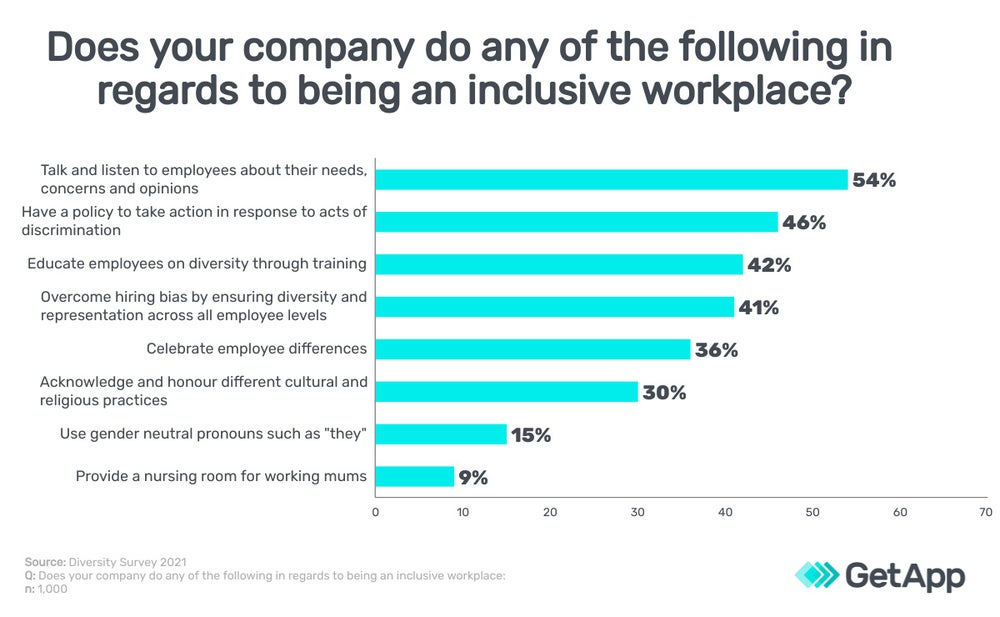 The study also uncovered that 77 percent of managers and directors say there is diversity in their workplace, but 18% admit to it not being diverse enough.

“Furthermore, 70% believe it is important to work for an organization that supports and promotes social movements such as BlackLivesMatter and LGBTQ+. Eighteen percent feel neutral toward this, and 12 percent claim it is not important to them,” GetApp reported.

The study also found that 27 percent of the respondents have experienced discrimination in the workplace, with more than half of the complaints having not been taken seriously.

“Moreover, 19 percent of those interviewed believe there is a gender pay gap in their company, and 32 percent claim their company is not transparent when they give out pay rises.”

About 40% of managers and directors say they “do a little but could still do more” and 10 percent believe they “should be doing more” to promote diversity within the company.

Only 46% of the businesses surveyed have implemented a policy to take action against acts of discrimination. “Of those companies that have policies in place, the most common course of action is to converse with employees and listen to their needs, opinions, and concerns (at 54 percent), followed by educating employees through trainings (at 42 percent).”

Navarrete says the benefits of diversity and inclusion are ubiquitous, not just for employees but also for the success of the company overall.

“Therefore more must be done to monitor and ensure that directors and managers of SMEs are actively promoting diversity within their companies,” she added. 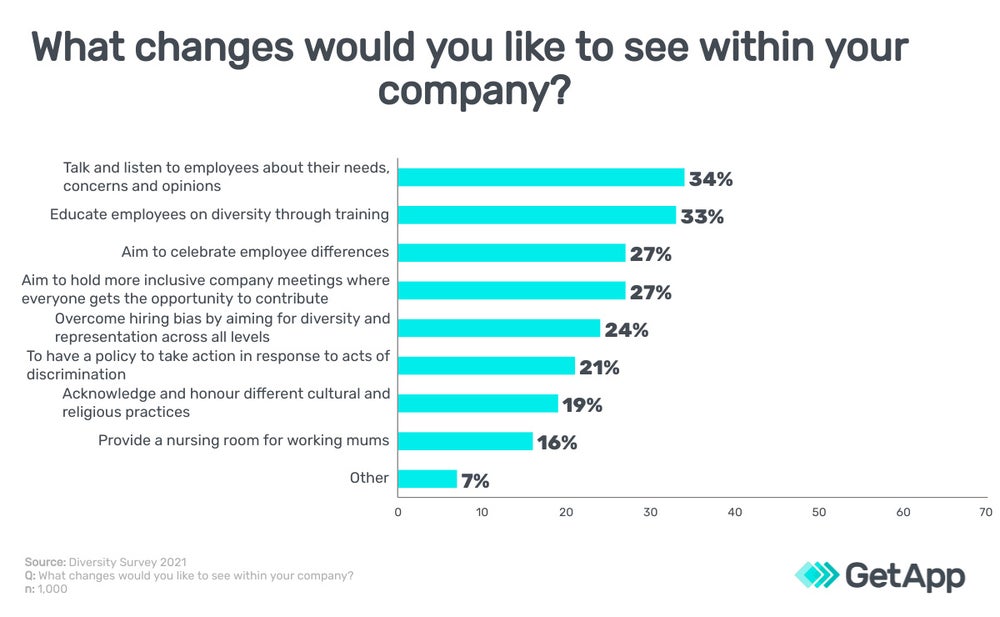 GetApp recommends that software such as communications, recruitment, and policy management tools be used by managers to ensure diversity and inclusion on an ongoing basis.

“Internal communications software makes it possible to maintain an efficient dialogue between employers and employees. This can prove useful in raising issues when employees do not feel comfortable doing so in person, for example,” it says.

Recruitment software, according to GetApp, can help managers overcome unconscious biases in the hiring process through mechanisms such as removing information like gender, race, and age from job applications.

“Talent management software lets employers accurately monitor employee performance and compensate them fairly. Aligning pay rises to performance data can help employers demonstrate that they are not discriminating against an employee based on any other characteristics,” it said, adding that employee engagement software helps managers communicate company culture to team members and make them feel invested in that culture.

To reap the many benefits that come from having a diverse and inclusive workplace, GetApp also recommends that policy management software be used as it can help managers write, approve, and maintain internal and external policies and maintain compliance by making policies accessible to all employees.

Diversity and Technology Have the Power to Boost Business Revenues

How to Implement Inclusion and Diversity at Your Organization

How You Can Get More Views on LinkedIn