Across the U.S., restaurants are being hit with a new scam: a barrage of one-star Google reviews unless they are paid to stop.

On a Saturday afternoon in early July, something struck Amy Babic as "off."

Someone had left a review on Google for her New York restaurant, Copinette, with one star, and no text attached. Babic looked up the reviewer's name in the restaurant's payment system and didn't see it. Over the next few days, more and more one-star reviews started popping up, until she got an email last Wednesday asking for money to take them down.

"We are begging you to send us google play gift card worth $75 You can buy the card directly from PayPal," the email said, which Entrepreneur has reviewed.

Babic's restaurant has been hit by a new trend: Scammers targeting restaurants by leaving a large number of one-star Google reviews — and then asking for money to delete them, according to recent reports from multiple outlets.

In San Francisco, at least 10 restaurants have reportedly experienced this scam, per local news reports.

The asks have a strangely conciliatory tone, Eater added. "We sincerely apologize for our actions, and would not want to harm your business, but we have no other choice," it said.

This kind of action is a cybercrime, Alan B. Watkins, a cybersecurity consultant, told the New York Times, adding that Google Play gift cards are hard to track, so that could be purposeful on the part of the would-be extortionists.

Babic got another email on July 12 with further threats and requests for money. "We can keep doing this indefinitely," it said. "Let's just close this matter positively and forget about each other."

"The fact is that we live in India and see no other way to survive," the email to the owners, Chinh Pham and Son Do, reportedly said.

And, quite simply, reviews are a hassle. Babic has been corresponding about the reviews with Google Business Profile Support since July 6, according to an email chain reviewed by Entrepreneur.

Babic told Entrepreneur that customer support told her it takes three days to look at a review and also asked Babic to use a specific method to report them. Meanwhile, the reviews are popping up every day. She's estimated she's spent about five hours trying to get them taken down. 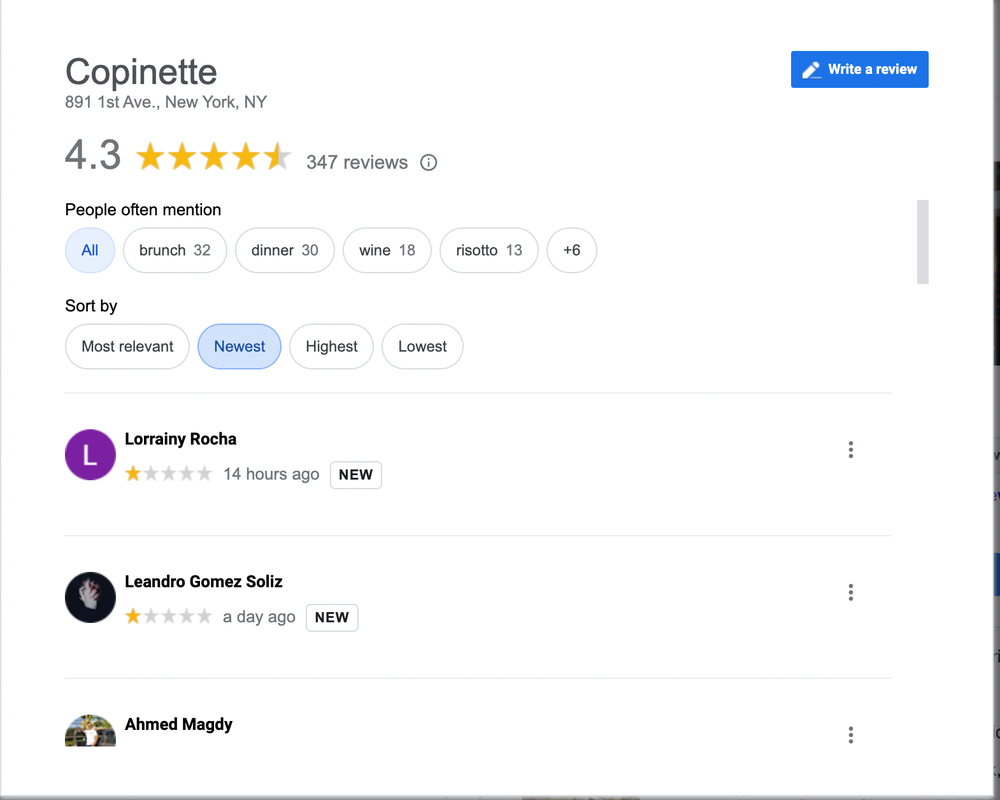 It is easy to see why a barrage of negative reviews would drive business owners to distraction.

A one-star increase on Yelp, for example, can lead to a 5 - 9 % increase in revenue, according to a 2011 Harvard Business School paper. A study published in the Economics Letters journal even found a correlation (not a causal link) between lower online reviews and higher closing rates during the pandemic.

Entrepreneur found at least three other Michelin-starred restaurants (which appear to be common targets for this scam) in New York with multiple one-star reviews but no text: L'Appart, Eleven Madison Park, and Atera, some as posted as of Tuesday morning.

L'Appart confirmed in a statement to Entrepreneur that it has been dealing with this problem, and there is potential for it to impact a restaurant's SEO rankings as well as foot traffic. Eleven Madison Park and Atera didn't immediately respond to a request for comment.

Google is "actively investigating this situation," and has already taken down reviews related to this issue, a Google Maps spokesperson told Entrepreneur.

Google policy is that a review has to be based on "real experiences," it said.

But for Babic, it has felt anything but quick. There were still plenty of one-star reviews on Copinette's page as of Tuesday morning. (By the afternoon, after Entrepreneur had reached out for comment about Copinette the reviews seem to have been taken down.)

"I'm waiting for Google to do the right thing. I'm just waiting," she said.