Jan 16, 2016 is thus marked as a crucial day in the history of India's startup ecosystem.

Celebrating the day this year, many stakeholders have been recalling the hits and misses of the last decade.

"In 2016, I fondly remember being a part of the inaugural Startup India initiative which cemented India's rise as the startup capital of the world. Recently as we celebrated National Startup Day, I took a moment to reflect upon the growth of Indian entrepreneurship," said Ritesh Agarwal, founder and group CEO, Oyo, in a tweet yesterday. 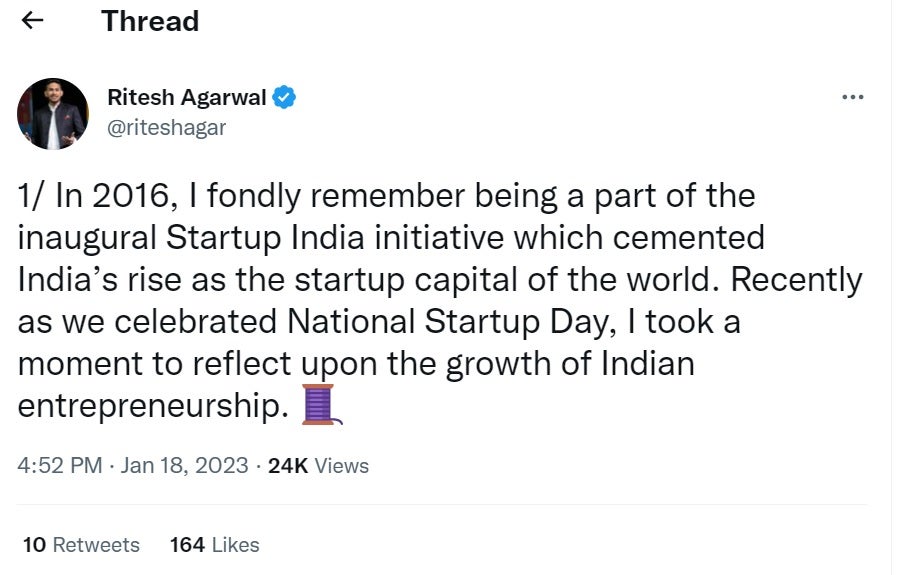 "The last decade has been phenomenal for Indian startups. It took 18 years in 2000 for the startup ecosystem to reach $100 million in revenue. This has come down to 5 years in 2017, according to RedSeer," he further added.

On Tuesday, Prime Minister Narendra Modi urged BJP members to reach out to every section of society and see if benefits have helped all. This also makes us peruse through the happenings in the startups in the last seven years and see how effective the Startup India Action Plan has been.

Entrepreneur India reached out to few experts to share their thoughts.

The Startup India Action Plan covered around 15 points (as mentioned in the image below by CNBC-TV18) and few other action items such as self-certification, single digital platform, and harnessing private sector expertise for incubator setup, among others. 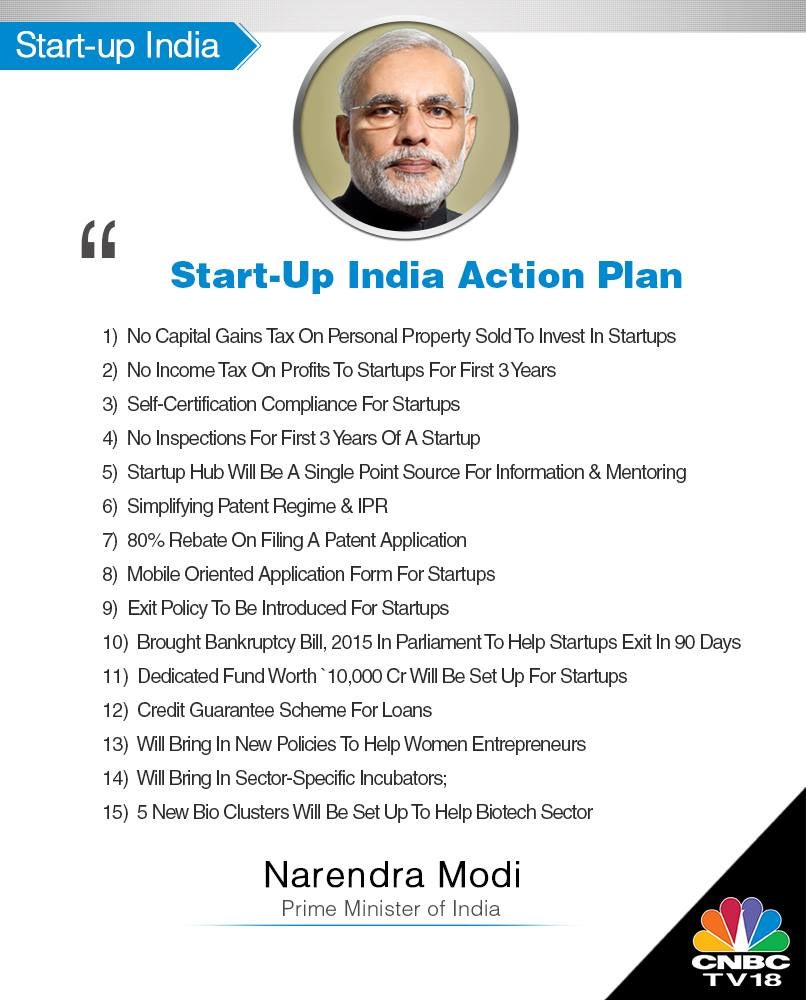 As a result of the sustained efforts in this direction, the number of registered startups has grown from around 400 in 2016 to 84,012 in 2022. And, these startups have created more than 8 lakh direct jobs. In addition, the Fund of Funds for Startups (FFS), and Startup India Seed Fund Scheme (SISFS) have been implemented to provide capital to startups at various stages of the business cycle.

"Startup India has been instrumental in socialising the term "startup" and galvanizing society and government to the need for greater entrepreneurial activity. A series of changes, relaxations and liberalization of bodies of law and acts can trace their origin back to this plan. The plan articulated by the honourable PM has made significant headway in 3 core areas including ease of incorporation of a startup, access to Rupee capital and development of a local Venture Capital ecosystem and incubation and support at the early-stage," said Siddarth Pai, founding partner, CFO, ESG Officer, 3one4 Capital.

He also added that all 15 points have been actioned out and are helping startups on the ground in terms of access and availability of the various schemes. "The startup action plan released by PM in 2016 was a game changer, though quite ambitious considering the dynamism of the startup space. The action plan has been implemented well and has certainly helped startups gain from it. Some of the points like the Patent regime helped build the IP and encouraged many to file for it and protect the innovation," said Anil Joshi, managing partner, Unicorn India Ventures.

We asked experts to share three plans that have been the most successful so far and here is what they had to say.

"Self-Certification based Compliance Regime is aimed at reducing the compliance burden of startups. Entrepreneurs are often unaware of the regulatory obligations of their new businesses. This can result in these enterprises being subjected to intrusive actions by regulatory agencies. Self-certification simplifies the compliance process and makes it flexible and friendly. Startups can self-certify for their compliance obligations under the 9 labor and 3 environment laws for 3 to 5 years," Rishi Agrawal, CEO and co-founder, TeamLease RegTech.

In addition, experts appreciate the single digital platform required today to allow startups to interact directly with government bodies and regulators. "There was a lack of a formal platform that provides readily available information on required licenses, registrations, and clearances among others. The action item focused on introducing a platform that can reduce the complexity of registration processes and avoid delays in business operations," added Agrawal.

In 2016, the Startup India Portal and mobile app were launched and have since then served more than 10 million registered users. The portal and app provide registration, application tracking, and compliance filing services. In addition, startups can also apply for various schemes under the Startup India Action Plan via these platforms.

A dedicated fund worth INR 10000 crore is something that all stakeholders have found to be the most effective. "This has certainly helped in building the domestic funds, prior to launch of Fund of Fund, domestic fund managers lacked access to domestic institution money but post launch we have seen domestic fund industry mushrooming and helped launch of 100s of funds in the close span of few years," said Joshi.

Further, a dedicated incubator has helped give much-needed initial support to entrepreneurs on experimenting in their ideas.

Lastly, the ability to fast-track the liquidation of a startup was a much-needed piece of legislation as the closure of a company is as important as expeditiously starting off. "One point to note – that is often underappreciated – is that the incorporation of a company has become extremely easy. The new SPICE form consolidates numerous licenses and registrations into one form itself. That has played a strong role in ease of doing business as well as ease of operations," added Pai.

Experts believe that the startups space is evolving fast and may thus need tweaking of policies on regular basis. "While some have already seen changes suiting the requirement and needs of the startups, there is also space for more. For instance, the current ESOP policy is non-working as exercising ESOP without liquidity event puts stress on capital gain tax on employees hence needs reconsideration. There should be no capital gain tax on sale of property -certainly needs an update as it's not working in the current format. Lastly, credit guarantee needs reconsideration as it is difficult to get access without proper orientation of bank branches," said Joshi.

As the industry is looking forward to Startup India 2.0, building upon the gains of Startup India 1.0, experts endorse going global, but staying local. "Indian startups do not restrict their ambitions only to India – many want to, and need to go global from day one. For this, they need to have the same flexibility as their global counterparts. The lack of this flexibility has caused Indian startups to "flip" – or move their headquarters overseas," said Pai.

Some of the ways to address this, according to Pai, are:

Besides the above, stakeholders would be happy to include building capacity in Tier II, Tier III India and increasing Rupee Capital participation in Indian startups in the action plan.

Shanthi specializes in writing sector-specific trends, interviews and startup profiles. She has worked as a feature writer for over a decade in several print and digital media companies.