Needledust juttis are shipped to over 200 countries and are frequently donned by celebrities such as Priyanka Chopra, Deepika Padukone, Alia Bhatt, Kangana Ranaut and Sara Ali Khan, among others

By Tahira Noor Khan
January 20, 2020
Opinions expressed by Entrepreneur contributors are their own.
You're reading Entrepreneur India, an international franchise of Entrepreneur Media.

Blenders Pride Reserve Collection presented Entrepreneur India's 35Under35 2020 list which included some leading names from the field of entrepreneurship and Needledust founder,Shirin Mann Sangha, made it to the coveted list.

Shirin Mann Sangha, founder of Needledust, claims to be an accidental entrepreneur. After completing her masters in journalism from Cardiff University in the UK, she came back to India and took up a job as an investigative journalist in a start-up. "I wanted to be an investigative journalist. I love writing. I still write. I do a lot of content writing for Needledust myself," says Sangha. But when she decided to get married, she had to take a break from journalism.

Sangha says she had a clear picture in mind of her bridal look. She, however, was fixated on the kind of shoes she will be wearing on her big day. "A lot of my focus was on my shoes and a lot of my friends and family didn't understand why with shoes. And it was actually juttis," says Sangha.

"I had a certain design in mind which I wanted to wear for my wedding. I went to lengths for months looking for those juttis but could not find them." At this point the 32-year-old Sangha drew the juttis design by herself on a sheet of paper and got it custom-made. She was ecstatic to wear them for her wedding and the shoes were liked by her friends and family.

When Sangha chose to wear juttis for her wedding, they were not trendy and it was a declining handicraft. "At that point it wasn't cool to wear juttis (in wedding)," claims Sangha.

She grew up watching her mother wear juttis and found them beautiful and elegant. "My mother was the inspiration behind starting Needledust. Even today I take her feedback on our designs and if she doesn't approve of anything, I go back and make amends," says Sangha.

That moment, the entrepreneurial bug bit her. "I thought that it took me so long to find the perfect juttis. There might be other girls out there like me who would want to wear juttis but didn't find something different, extraordinary or something beautiful. There was nothing like this in the market. I felt that I want to do this, I want to explore it," shares Sangha.

Needledust Forever Yours. This is the first pair of juttis designed by Sangha for her wedding and is currently a bestseller on her website.

Though hesitant after encouragement from her husband, Sangha five years ago manufactured 100 shoes in six designs and five sizes. She put them up on an e-commerce portal and within seven days of Needledust going live, her entire stock was sold out.

"I had no idea what to do (after posting the juttis on an e-commerce platform), on the seventh day of us going live, I got an email from that we are sold out and when can we get the next stock. But there was no stock because I didn't even think I will sell these. And that's how it started," says Sangha.

After putting up her designs on another e-commerce website and successfully selling them, Sangha got confidence and opened a tiny store (which is today four times its previous size) in Shahpur Jat in New Delhi and then launched her exclusive online retail store Needledust.com. "I started with an online portal because I didn't have the guts to invest in a brick-and-mortar store in a retail space or even build an exclusive website. Nobody was doing designer juttis," says Sangha.

Ascendancy Of the Juttis

Needledust now has three retail stores; two in Delhi and one in Chandigarh; and an online exclusive online e-commerce store which ships to over 200 countries. The designer jutti brand has rolled out over 300 designs in the last five year and has currently 90 to 95 active designs on its shelves. The company has also partnered with the celebrated designers Abu Jani and Sandeep Khosla by manufacturing juttis designed by them.

Needledust Funk Mirror - It is from Needledust and Abu Jani & Sandeep Khosla Collection.

Six months earlier, Needledust partnered with Swarovski crystals. "We are the first handicraft to have collaborated with Swarovski. So if anyone wants a piece of jewellery on their shoes, we also have that. With this partnership we have also for the first time launched customization services," says Sangha. She further adds, "We like to believe that when you are purchasing Needledust, you are purchasing an heirloom." 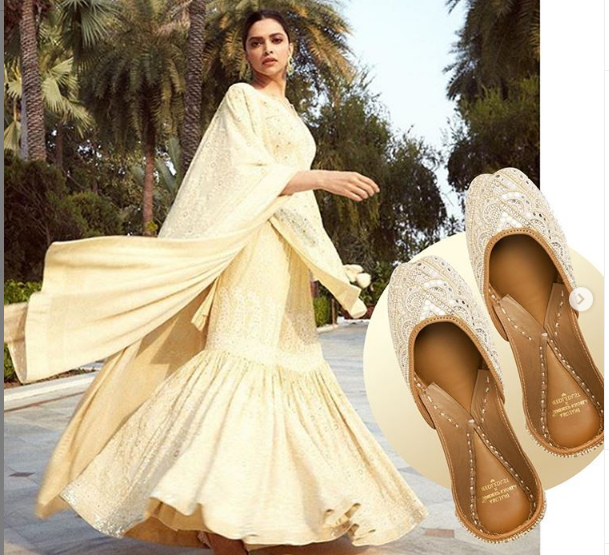 Needledust has a very active and aesthetic Instagram page with over 300,000 followers. Sangha believes that social media has played a vital role in Needledust's success. "Social media or the new-age media is a massive tool for start-ups and people with new ideas. It lets you reach millions of people with zero to minimal cost," says Sangha. 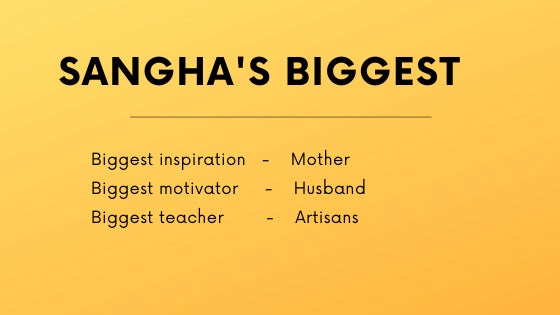 Sangha reveals she has received orders from countries such as Italy, Switzerland, Zimbabwe, China, Japan and Korea, among others. "It is not just the NRIs who order from us but the natives of these countries."

She shares that some of her customers have been English wedding bridesmaid wearing juttis along with their gowns and dresses, and a Philipino bride wearing Needledust juttis with her white gown. "These stories are pretty incredible on an everyday basis," says Sangha.

Needledust is enormously popular among Bollywood celebrities. A-list Bollywood ladies such as Deepika Padukone, Kareena Kapoor, Alia Bhatt and Sara Ali Khan, among others, are frequently spotted wearing them. Sangha says that Bollywood fashionista Sonam Kapoor was the first one to wear Needledust and from thereon, Needledust's rendezvous with Bollywood has been growing organically. 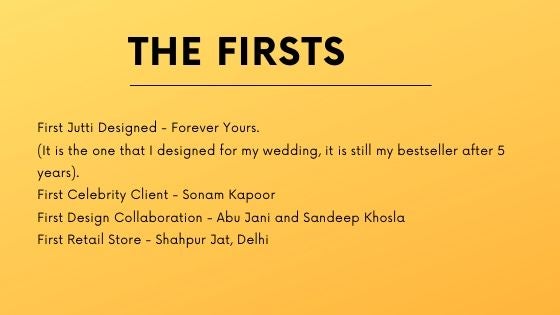 Needledust has provided its designs to big-budget Bollywood movies such as Padmavaat and Veere Di Wedding. Priyanka Chopra and Deepika Padukone also chose Needledust for their wedding celebrations.

Sangha attributes the popularity of Needledust among various age groups to the versatility the designs. "Our designs are such that from an 18-year-old to a 50-year-old can find something that they like. That's why you can spot an Ananya Pandey to a Bollywood veteran like Kajol wearing Needledust."

This year Needledust will open two new retail showrooms, one in Delhi and the other in Mumbai.

How This Shipping Startup Rocketed to Unicornhood