Metra aerodynamic grain cleaners has brought the quality of postharvest handling to a new level, thanks to the design features of the machines

The US is one of the most economically developed countries in the world, holding leadership in many business areas for ages. Along with a strong industrial and high-tech complex, agriculture is largely developed in America. The US agro-industrial complex fully covers the domestic needs of the market (except for exotic crops such as coffee and bananas), but also leads in terms of agricultural exports, which exceeds imports many times.

US is the leader in grain export

According to the analytical forecast of the US Department of Agriculture, in the future the volume of exported grain will only increase. And the US has been the leader in this matter for many years.

The most significant part of the exported raw materials are food crops—wheat, corn, soybeans, fruits. Such impressive figures lead to the fact that the pace of development of the industry has slowed down in recent years. At the moment, the share of the agricultural sector does not exceed 3 per cent of the country's GDP. However, the importance of US agriculture to the country and trading partners remains immense.

New technologies are the key to success in agribusiness

One of the main factors that influenced the rapid development of the agro-industrial sector in the last century was the adoption and use of new technologies. As has already been proven by all spheres of business, it is the use of technological innovations that allows the company to optimize labor, reduce costs and earn more. Therefore, in our time, agricultural technologies do not stand still, allowing farmers to improve the productivity of farms and bring profitability to a new level.

Today, among the companies producing equipment for the agro-industrial sector, the American manufacturer Metra Group is especially interesting. The company is one of the leaders in the development of high-tech equipment for postharvest handling of the crop. Metra's story is not luck or an exceptional advertising campaign, it is not a government tender or the story of a monopolist. Metra Group is the creation of truly new technologies for grain cleaning. Unique design solutions make Metra equipment suitable for use on small farms and large industrial elevators.

The production of Metra aerodynamic grain cleaners has brought the quality of postharvest handling to a new level, thanks to the design features of the machines. The straight-flow axial motor with an impeller, which is equipped with the grain cleaner, allowed to reduce the power consumption to a minimum without losing productivity.

Aerodynamic grain cleaners "Metra' are currently the most economical machines in terms of energy consumption, maintenance and repair. Metra devices consume 2.5-3 times less electricity than their closest counterparts. This result was achieved thanks to a design innovation—the use of an impeller as a power plant—which allowed to minimize the loss of airflow; exclude the ingress of small debris around the machine, into the air intake; reduce the power of the electric motor on the separators, but keep the air flow parameters; and exclude vibrations.

Adjustment of the "Metra' grain cleaners consists in changing the impeller speed using a special knob Impeller Power Regulator, which allows you to more accurately adjust the separation for any crop and significantly reduce the time for setting up the machine. The digital indicator, which the Metra grain separators are equipped with, allows you to see at what speed the ideal cleaning and calibration of a given material can be achieved (the indicators will differ on different crops). Another convenience for farmers and farms is the "reverse' mode, which allows you to clear the machine from the previous crop in 5-10 minutes and prepare it for work with new material. The design of the grain separator excludes the ingress of foreign objects into the separator, which could cause failure.

The presence of a frequency converter in Metra grain cleaning machines allows protecting the motor from voltage surges and ensuring smooth start and stop of the separator. Thanks to the reliability of all units and mechanisms, grain cleaners will be able to serve for a long time without technical intervention of specialists. In order for the equipment to serve for a long time, it must be looked after, cleaned and properly stored after the end of the season.

"Grain is a delicate living organism. It requires light, gentle, airy handling, then it will be healthy," says a Metra spokesperson.

The grain contact with machine parts should be minimal. Mechanically calibrated grain cannot remain intact. Healthy grain will be preserved only after aeroseparation—a method of sifting, in which the mass of grain is separated into fractions by air. In addition to the fact that the grain is not injured during air separation, it is very precisely calibrated. Grain germination after preparation by Metra separators is about 98 per cent.

Modern agricultural science does not compare the methods of mechanical and aerodynamic separation when preparing seeds for sowing. Obviously, air separation for seed is preferable to coarse mechanical processing, when the grain needs to literally break through the metal grate.

Due to the separation of the bulk mixture by specific gravity, grain cleaners can cope with problems such as Vomitoxin (VOM), Fusarium (FUS), Aflatoxin and other types of fungi affecting grain. It is important to understand that grains with these diseases are the same size as healthy grains, and therefore cannot be separated using grate cleaners.

Principles of cleaning exhaust air in the cyclone-sediment chamber of the Metra grain cleaner. 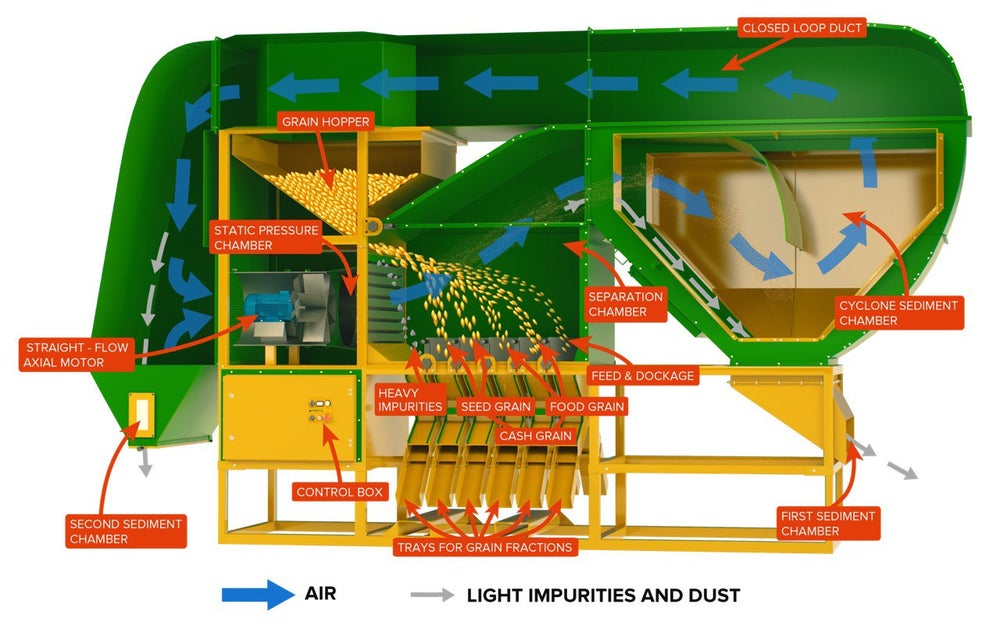 A closed-cycle cyclone-sedimentary complex is a combined treatment system that uses:

Thanks to precise aerodynamic calculations, Metra equipment efficiently cleans all types of crops and can increase farm yields by up to 35 per cent.

In recent years, the Metra Group has significantly expanded its sales geography to almost all continents and continues to do so despite the crisis and pandemic all over the world. The manufacturer of modern grain cleaners is a regular participant in agricultural exhibitions not only in the US. At these events, the company's engineers have the opportunity to personally communicate with farmers and find out the needs and wishes of farmers. Thanks to this approach, the Metra aerodynamic machines have become a true friend for any farm.
David Soltan