Franchisees Jeff and Lori Kolenich are proud to be a part of the revitalization of their native Ohio city.

Related: Why This Man Went From VP to Franchisee

After opening their SpeedPro location, Jeff and Lori were able to contribute to the city's revitalization -- a goal the couple had since deciding to open their own business. Today, the Kolenichs partner with local businesses to provide graphics that enhance Cleveland and revamp the city. 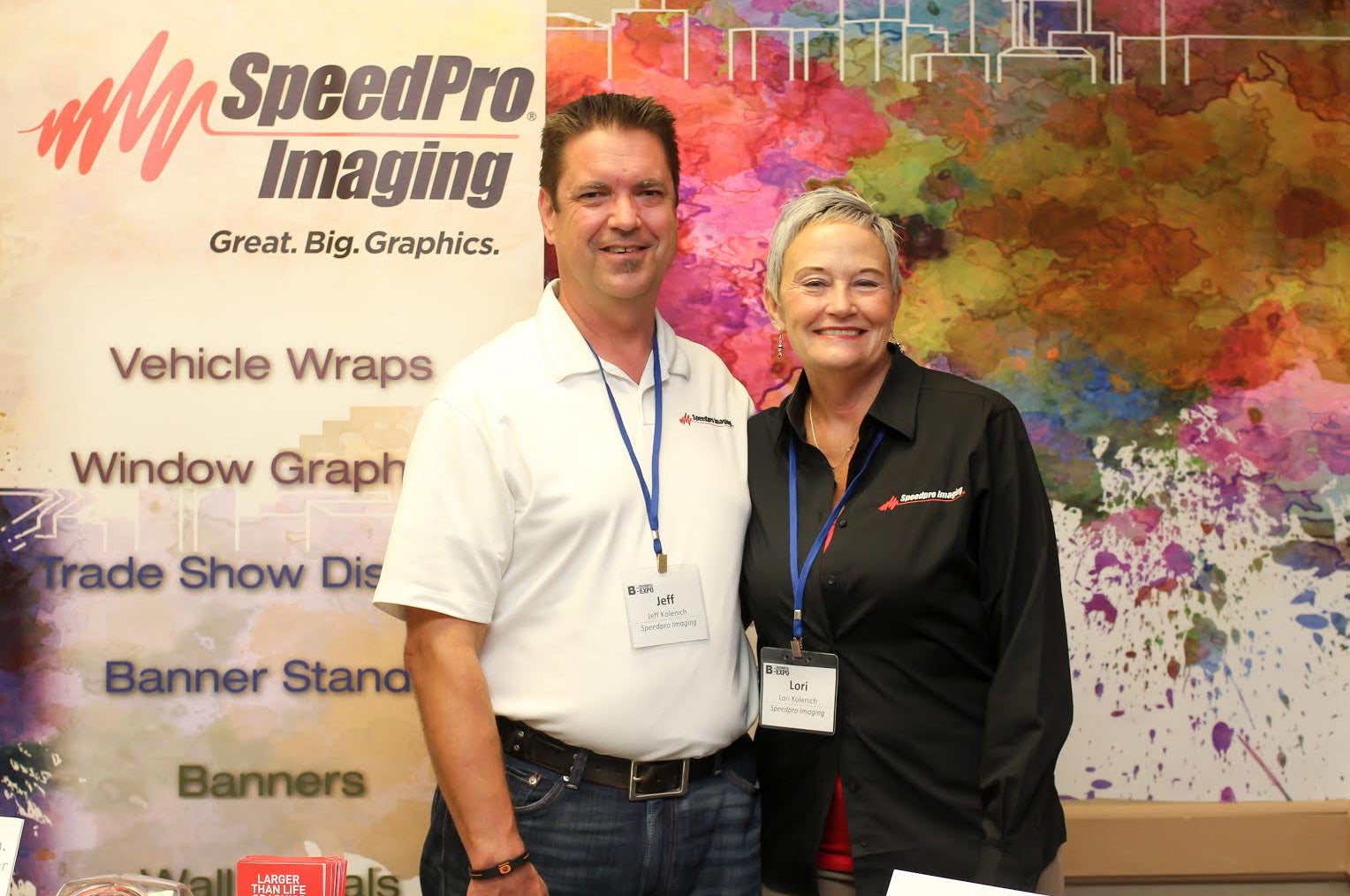 Since 2011. It will be five years this coming April.

We always knew we wanted to start our own business one day, but we weren't sure what that business would be, and we didn't want to do anything from scratch. After the both of us were laid off from our jobs in 2011, we began to seriously look into starting our own business, and Lori suggested we see a franchise consultant.

Franchising comes with guidance and expertise from corporate teams with proven systems. The opportunity allows for people to rely on when help is needed while also capitalizing on the power of the brand.

Before franchising, we both worked for American Greetings for over 15 years. We both started in in sales and worked our way up through the company. Before American Greetings' decision to downsize, I was the director of trade marketing, and Lori was a project manager.

Before we decided on SpeedPro, we had numerous conversations with the corporate team as well as other owners. There was a tremendous focus on the quality of the products being produced and providing clients with outstanding customer service. The core values at SpeedPro are the same values that Lori and I share and have developed while we built our professional careers. Through SpeedPro, we have the opportunity to create fun and exciting graphics for our clients.

One of our core values is keeping things local, and by doing so we are able to provide large format graphics to area businesses. Right now in Cleveland, there are huge efforts being made to revitalize the city. Clevelanders are pushing very hard to bring Cleveland back to its former glory and focus on all things Cleveland. Lori and I wanted to be a part of that.

Since opening SpeedPro, we have created and built strong relationships with local businesses such as the Horseshoe Casino and the Greater Cleveland Aquarium, both of which are making efforts to revitalize Cleveland. Through SpeedPro, we have also been able to help other local businesses with their revitalization efforts by creating fresh and exciting graphics for them.

Related: Why This Couple Jumped at the Chance to Own a Franchise

I'm not sure of the exact cost, since corporate lends a hand in providing some of the initial costs at first, but I believe we spent roughly $150,000 to $200,000. This included the franchise fee, travel costs for training and to visit other SpeedPro locations, as well as other costs involved in opening a business.

We conducted online research like most people. Lori and I also sought advice from other small business and business coaches throughout the Cleveland area. It was our goal to find out what it would take to open a business in Cleveland. We turned to the franchise consultant for a lot of things. For research on SpeedPro, we talked to a wide variety of SpeedPro owners. We asked them every question imaginable, as well as had meetings with those franchisees and corporate.

Everyone at corporate was very transparent and answered our questions truthfully. We were also very impressed with the passion and dedication they had for their business. Like Lori and I, a vast majority of SpeedPro owners left the corporate world to open a location. They are business-savvy people who realize great customer service can benefit their company, and we felt like that was exactly the type of business we wanted to enter.

For us, finding a landlord that was willing to work with us on the buildout of the space that was necessary for our studio was the most unexpected challenge of opening our franchise. We expected to find a location right after we signed our franchise agreement, but that is not how it worked out. SpeedPro studios need quite a bit of space, which limited the available options.

Lori and I were also at a slight disadvantage when we opened our business, because the economy was at the height of the downturn. Many landlords were property-rich but cash-poor. They were very unwilling to negotiate on their lease, and the price some of these landlords wanted for their spaces was ridiculous.

Do your research. Opening a business, franchised or not, requires a lot of time and effort. It's not something you can jump right into. Anyone who wants to open their own franchise needs to be willing to put in the research.

Also, talking to a mix of owners can be great help. Lori and I talked to a wide variety of people, not just individuals in the printing industry. Talk to successful businesses, struggling business, those who just opened their business and those who have been open for years. By talking to a different mix of people, you gain the opportunity to learn advice and tricks that you previously wouldn't have access to.

Q: What's next for you and your business?

Last year, Lori completed the Goldman Sachs 10,000 Small Business program, which provides small businesses with practical business and management education as well as support services. Through the course of four months, the program allowed Lori to become more focused on working on the business -- not just in the business. Since Lori completed the program, we've implemented a targeted growth plan as well as many initiatives that will help us grow as a business and in the Cleveland community.