That's One Career, to Go

How Lisa Jones went from franchisee to VP at Jersey Mike's

By Jason Daley
January 19, 2010
This story appears in the February 2010 issue of Entrepreneur. Subscribe » 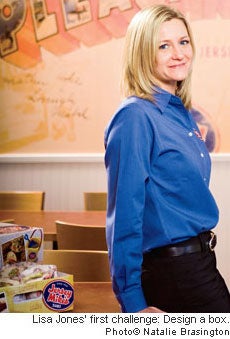 When she was managing a Seattle-area Starbucks, Lisa Jones' dad kept telling her, "You're making so much money for that place, you ought to start your own business." Eventually, she listened. In 2005, with money from relatives, friends and an SBA loan, Jones, 35, opened a Jersey Mike's sandwich franchise. The restaurant did well out of the gate and gave Jones the flexibility to spend more time with her children. But after a while, Jones missed the team spirit at the coffee shop and decided to take the crazy step of hiring a manager so that she could apply for a district manager job at Starbucks. "When you're the only one in charge," she says, "there's nobody to commiserate with, nobody right there with you."

When she explained her plan to Peter Cancro, founder of Jersey Mike's, he instead tapped Jones to set up a catering system for the chain's 400 stores in 27 states, a collaborative project that kept her traveling and consulting with franchisees around the country. She hit the catering assignment out of the ballpark, creating new packaging and menus and a plan that made the national program consistent and profitable. It also led to a big change. In July, Jones sold her franchise and moved with her children and father to New Jersey to become Jersey Mike's vice president of new store development.

Was it intimidating to go corporate?
I started completely from scratch. Peter didn't say, "This is exactly what I want." He just said, "Design me a program." I thought to myself: "I have to design a box? How do you design a box?" But I was still a franchisee and could come at it from a franchisee's perspective.

So, how do you design a box?
We noticed that franchisees were using old tomato boxes to deliver sandwiches in, which worked but they still had, well, tomatoes on them. So we hired a Seattle design firm to come up with ideas. We'd take sandwiches over there and cut them up to see how they fit until we got to a box we agreed on.

Were the franchisees stubborn?
It's always hard to get people to do things in new ways. We have people in the company who make 20 percent of their top line from catering, so we took their valuable information and tried to broadcast it to a group where only 50 percent use computers. It was challenging but, in the end, people who had been just cutting up sandwiches and putting them on a platter were actually proud of the more cohesive program we gave them.

How has running a franchise helped you as a VP?
I call running a store my Harvard business education. There are things you can't learn until you run your own business. It makes me feel very connected to people on the front line, and I know the challenges they face every single day. Opening a franchise is stressful, and new franchisees are responsible for a lot of stuff, like buying equipment, hiring employees, negotiating rents. We're bringing a lot of those services in-house so new franchisees can focus on training and marketing and putting together the best team. We'll handle the rest of it.