Attendees of the International Franchise Association's (IFA) annual convention in February in Orlando, Fla., jammed themselves into a conference room to hear presentations on social media. A morning Technology Summit has been a fixture at the trade group's meetings for half a decade, but this time things were different: Both Google and Facebook sent emissaries to speak at the convention, announcing a new age in social media tailored just for the franchise world. It didn't make a blip in the technology news media, but for franchisors it was as exciting as if Steve Jobs had released an iPad just for them.

Not long ago many franchises were on the fence about the value of social media. Today, it's all they talk about. "The biggest change has been in attitude," says Jack Monson, vice president of Engage121, a Norwalk, Conn.-based firm that develops social media management software for franchises. "Two years ago there was a reluctance by franchisors to get involved in social media. Flash forward to 2012, and there's not a franchisor at the IFA who didn't think they needed to do something. There's been a huge turnaround in the way people perceive what social media can do for them."

There's also been a huge turnaround in social media itself. As platforms like Twitter and Facebook mature and become more conscious of their user groups, they are working to make their services more relevant to the unique characteristics of various types of businesses, including franchises. At the same time, as use of social media becomes more sophisticated, the franchise community is finally understanding the value beneath the hype.

Franchisors have moved squarely away from wondering, "Is social media even necessary?" to not only accepting the new technologies, but actually embracing them, asking, "How can we make social media work better for us and our franchisees?"

The biggest lesson franchisors have learned is that there have to be real people behind all that posting, and more often than not, the personality needs to be that of the franchisees. "Social media is inherently local. Customers don't have a relationship with the corporation, but they do see their local franchisee every day," says Jon Carlston, a partner at San Diego-based Process Peak, a social media management and software development firm that serves more than 150 franchisors. "Consumer interest is with connecting to local business. So the social media opportunity lies with franchisees. But from an execution standpoint, getting all your franchisees to agree on a new campaign or discount is a nightmare."

That's why Carlston and other tech-savvy members of the franchise world have set up multiple meetings with Facebook to discuss their needs. The result is a suite of tools released earlier this year that changes the way franchisors use social media.

Facebook's Reach Generator gives companies a way to finally capitalize on their "fans." The Generator puts a sponsored post into each fan's feed, increasing weekly eyeballs on advertising from 16 percent of fans to about 50 percent.

The most important change, however, involves the "parent/child" or "national/local" management tools, which were previously available only to companies with a minimum advertising purchase. Now free to all, these tools give franchisors administrative control over franchisee pages and link all the brand's pages together. This gives franchisors more say in how their brand is presented, and gives franchisees more access to corporate images, tools and copy.

"Franchisees are just running their businesses day to day. They can't be masters of everything," Carlston says. "Unless you give them some hand-holding guidance, you can't expect them to do anything, or they may come up with their own harebrained ideas that don't reflect well on the brand."

Providing that guidance is where companies like Carlston's and Monson's come in. Instead of forcing franchisees to struggle to produce offers and interesting posts each day, such companies have implemented sophisticated management tools that provide interesting posts, offers and tweets and have them lined out on a monthly calendar.

Content Creators
In fact, some new franchise systems are so heavily invested in social media that it's a required part of the business. Cathy Deano and Renee Maloney's 64-unit franchise, Painting With a Twist, which offers painting parties and wine tastings, has invested heavily in social media. The Mandeville, La.-based company's Facebook pages now average more than 3,000 fans each. 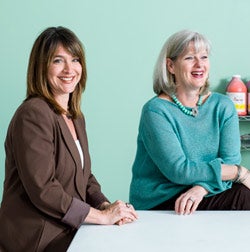 Renee Maloney (left) and Cathy Deano make social media a priority at Painting With a Twist.

"It's in our training, and we emphasize that it's not all about self-promotion," says Maloney, who began using the national/local tool as soon as it was available. "It's more about interacting with a community of Facebook friends. Out of our three-day franchisee training, we spend half of one day doing nothing but social media."

Keeping franchisees on point means giving them tools to manage their social media without being overwhelmed by it. "As we grew, and after we opened our 10th store, we realized we were getting so much business from Facebook that it was very important to invest in. But we wanted to make sure there's some etiquette to follow," Deano explains. Maloney worked with Process Peak to implement a social media calendar to take the burden off franchisees.

"As the franchisor," Deano adds, "we have to make sure everything that goes out there is part of our brand and acceptable to our brand. And for the franchisee who can't or doesn't want to do this everyday, they have a list of posts to choose from on their dashboard, or they can automate their updates to Twitter or Facebook for the next two months. We try to take that daily grind away and automate social media for them."

But Deano and Maloney insist that social media is worthless if it's just about putting eyeballs in front of their corporate logo. To be effective, the content has to be compelling and create real engagement with customers.

"Coming up with content on a regular basis is the No. 1 thing franchisees say they struggle with," says Chad Cohen, vice president at Fish Consulting, a franchise PR firm that began developing social media content for its clients three years ago. "We help them develop that calendar of updates and build all the content for them. It's talking about the right things at the right time. We always stress to our clients that they need to be engaged. There can't be a dead voice on the other end."

Think locally. Sure, your franchise may be part of a national system, but to your customers it's a local business. Offer tips, news, links and event notices that relate directly to your community--it's the best way to create a fan base close to home.

Think in pictures. If your business has a visual element, make sure customers see your products as often as you talk about them. If you're service- or information-based, experiment with video tutorials or podcasts. You can also film customer testimonials for an added video component.

Stay responsive. You don't have to say thanks for every compliment you receive, but if there is a problem that can be easily addressed or an interesting conversation taking place, step in and let your customers know you are listening. Social media dies if it's a one-way conversation.

The fast-growing, 50-unit, Las Vegas-based franchise Nothing Bundt Cakes has become a master of this. The company, which sells themed Bundt cakes and other baked goods, has invested heavily in social media and has regular training sessions to get franchisees up to speed on the most effective tactics.

"We're lucky because we're involved in fun events and celebrations that guests already like to talk about," says Donnie Robertson, director of marketing for the company. "We're very privileged to be a part of those conversations. So we pay close attention to the quality of our posts and make sure we're listening to our guests and talking about what they want to talk about, not just our products. We'll give them recipes that complement our cakes, or put up some humor. We love to laugh; they love to laugh. We create loyalty by listening and talking about things that matter."

In addition to Facebook and Twitter, newer platforms like Pinterest are drawing crowds and creating marketing opportunities for businesses, while Google+, which has languished since its launch, is seen as having tremendous potential to integrate search and social media. New platforms will continue to emerge. But the core of social media--customer engagement--will be key to franchises moving forward, no matter what form it takes.

"I recommend to everyone to be platform-neutral, because there could be other social media worth pursuing," Engage121's Monson says. "You have to keep an open mind and keep an eye on any new channels that come along. It's important for businesses to know where their customers and potential customers are spending their time."