She's CEO of a billion-dollar brand, but she's always looking to invent the next big thing.

By Liz Brody
November 28, 2018
This story appears in the December 2018 issue of Entrepreneur. Subscribe »

Ladies' underwear has long been revolutionary territory -- bras burned, girdles sacked. But when Sara Blakely, a 27-year-old fax machine saleswoman, discovered she was making less than her male colleague at the same job, she was inspired to take scissors to tights to invent what would give power to the pantie (and anyone who wore it), and launch her own business. Twelve years later, she landed in Forbes as the youngest self-made female billionaire in the world. You know the story: Blakely's company, Spanx, started with $5,000, is now to shapewear what Kleenex is to tissue, baptized by Oprah as a "favorite thing" and worn unapologetically by the famous, from JLo to Reese Witherspoon. It's even made its way into MoMA. Blakely, who was inducted into Babson College's Academy of Distinguished Entrepreneurs last month, is still on a roll -- and finding new ways to share her wisdom.

What's new at Spanx? Black-tie Spanx? Spanx for dogs? Anything in the pipeline?

There are three things in the works that are specifically inventions I can't talk about. But I'm really excited about our new leggings. And the denim we just launched.

You've done this for 18 years. Do you have another venture up your sleeve?

I'll never say never. I keep an idea book. Right now it's 99 pages, single-spaced, and a lot of the ideas have nothing to do with Spanx. But what I am working on that's new is a digital platform of my insights, because I'm asked multiple times a day for 15 minutes of my time. And the question is always the same: How did you start Spanx? The real answer is it started way before I cut the feet out of my pantyhose, with the work I began doing at the age of 16 on myself. So the digital platform is in beta now.

Can you share some of your insights as you've grown the company to nearly 200 employees?

Looking back at the past 10 years, my biggest takeaway is to fire faster. That's a hard thing to do. The other two lessons that just keep getting stronger and louder are: Hire your weaknesses, and stay in your lane.

Like, wake up every day with What am I good at? What am I contributing to the world? I identified very early on what my contributions to Spanx should be: to invent, market, sell. So if I'm spending too much time sitting with lawyers or in finances, a little radar goes off. I ask, Why? Is it because I don't have the right people or talent? So I encourage people to delegate and hire where you aren't strong. And realize that the self-awareness of What are my strengths, and what are my weaknesses? comes when you are quiet with yourself and you're listening, you're paying attention.

On Facebook you posted about how you once sent a shoe to someone with a note that said, "Just trying to get my foot in the door." That's funny. What other things have you done like that?

Speaking on the shoe theme, one day I went to work [as a fax machine saleswoman] and I looked down and realized I had one royal blue and one black heel. And instead of saying, "Oh my God -- I gotta go home and change my shoes," I was like, "You know what? I'm going to run with this." And it was such a good way to open doors. People didn't kick me out of offices, because I'd say, "Yep, look what I did today." There's just so much lesson in that as far as being willing to laugh at yourself. It humanizes you. It's the best way to connect with people.

Related: How This Former Counter Makeup Artist Turned Her Love of Style Into Millions of Followers

You and so many other entrepreneurs have said that you've got to be willing to make mistakes.

Yes. I'm also a big believer in not disconnecting from the child inside of each one of us. So just simply asking the question "Why? OK, but why?" When I was starting out, I discovered they were putting a tiny rubber cord in all our waistbands that no longer needed to be there with the advancement of yarns. When I would ask why, I would hear, "That's the only way the garments can stay up." I'd say, "Have you tried it without?" No. "How do you know?" We just know. So I'd say, "Let's see." There's an art to it, because you need these people, so it's about inspiring them to think this way. Asking why can get you some incredible breakthroughs. 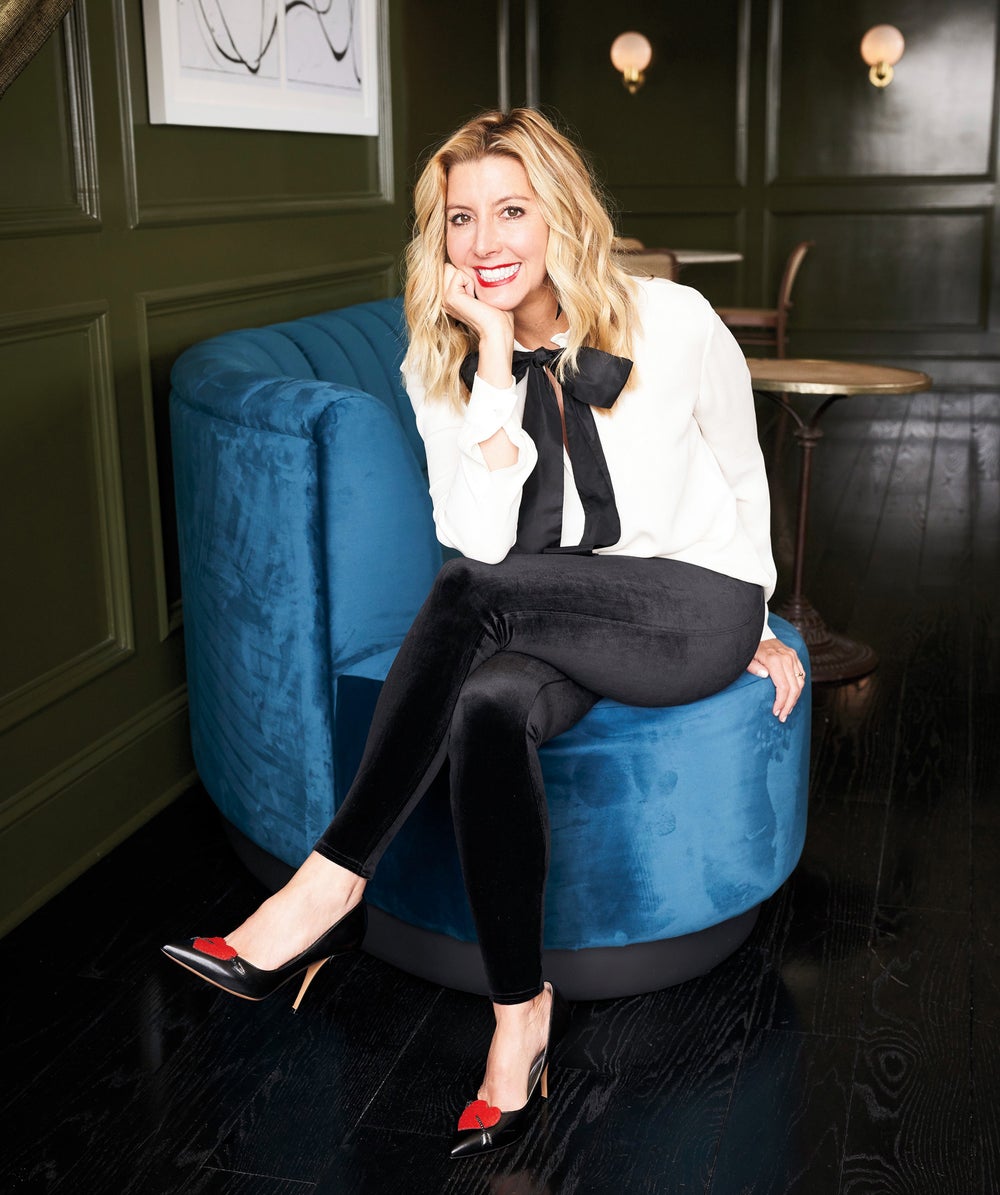 How does your entrepreneurial style differ from your husband's [Marquis Jet cofounder Jesse Itzler]?

The thing about Jesse that I've loved is he'll have an idea on a whiteboard and, like, a month later, it's in action. He's more comfortable going and starting and letting it be super messy in the beginning. And I'm a little more careful.

Does he wear Spanx?

Yes. He loves our men's underwear; he runs in them.

Is that line growing?

We have a cult following for our men's line. The man's undershirt hadn't been reimagined since 1918. So we put a little bit of Lycra in it to make it better. Some things evolve so rapidly and some things you look at and think, This thing's been the same for 50 years. And those are the ones I like to pay attention to.

You have four kids -- how do you manage motherhood with running your company?

I don't get my nails done anymore. I mostly paint them myself. I spend my entire weekend with my family and am very involved in the mornings and nights with them. At work, I had so much coming at me -- one minute lawyers are talking to me, the next I'm reviewing products and my son's teacher is calling me. What I did that was super helpful was to bucket things. So now I have a designated time each week for people who request my time or money. I've got a designated time, usually twice a week, to go over email. On Tuesdays, I'm mostly marketing and brand. On Thursdays, I'm all product. On Wednesdays, I meet with all the leaders. It's not foolproof, but at least I laid down a blueprint.

Any advice to other female founders on the mom front?

The minute I became a mother, it was like someone turned up the volume of the negative self-talk to 10. I gave birth. I was like, What just happened? It's taken years, but I've learned to not let it spin out of control. I'll hear this voice go: The other mothers remembered that it was Inside-Out Day, and our kid was the only one who went to school with his shirt not inside out. You're so bad. You're spread too thin. You're overwhelmed. I'll start to go down this rabbit hole and then I'll stop and immediately say good things about myself: You know what? You're doing great. You've got four healthy kids -- I'll just kind of reverse the talk track. It's helped a lot.

Did you consider any other names for Spanx?

No way. Open Toe Delilahs? Sara, what was that about? It sounds like sandals.

I don't know! Don't know! But you would not be interviewing me right now if I'd named the company Open Toe Delilahs.

In-House Production vs Outsourcing: How to Achieve the Best Content Marketing Results No Matter Who's In Control