Why Tech Stocks Should Keep Outperforming in 2021

Valuations are at sky-high levels.
Next Article Add to Queue


The ascent of technology stocks that began at the March lows has been nothing short of incredible. The leading technology companies have seen their market caps', influence, and power expand over the past months. COVID-19 has been the worst health crisis the world's faced in a century. The virus has had a silver lining for technology companies. They provided the tools and services that allowed some normalcy to continue as people sheltered at home and isolated themselves. The coronavirus has hastened the technology industry's growth as retail stores closed, people are working from home, and a new normal emerged fueled by technological innovations.

Technology shares have risen to dizzying levels, but many market participants continue to buy. The leaders of these companies face significant pushback from government officials and regulators in the US and Europe. They have expressed growing concerns that the control of data has allowed for an unacceptable level of influence. Cash hordes and trillion-dollar-plus market caps create an environment where antitrust issues impede competition have risen to the surface as we head into 2021.

Meanwhile, the legislators and regulators face a catch-22 situation. Any significant crackdown that breaks up the technology leaders or gets in the way of innovation may hand the leadership role to the Chinese. China's political structure allows for monopolies as the nation has tight control over every aspect of its economy.

Valuations are at sky-high levels

The Invesco QQQ Trust (QQQ) holds a portfolio of the leading technology companies that comprise the NASDAQ 100.

The fund summary and top holdings include: 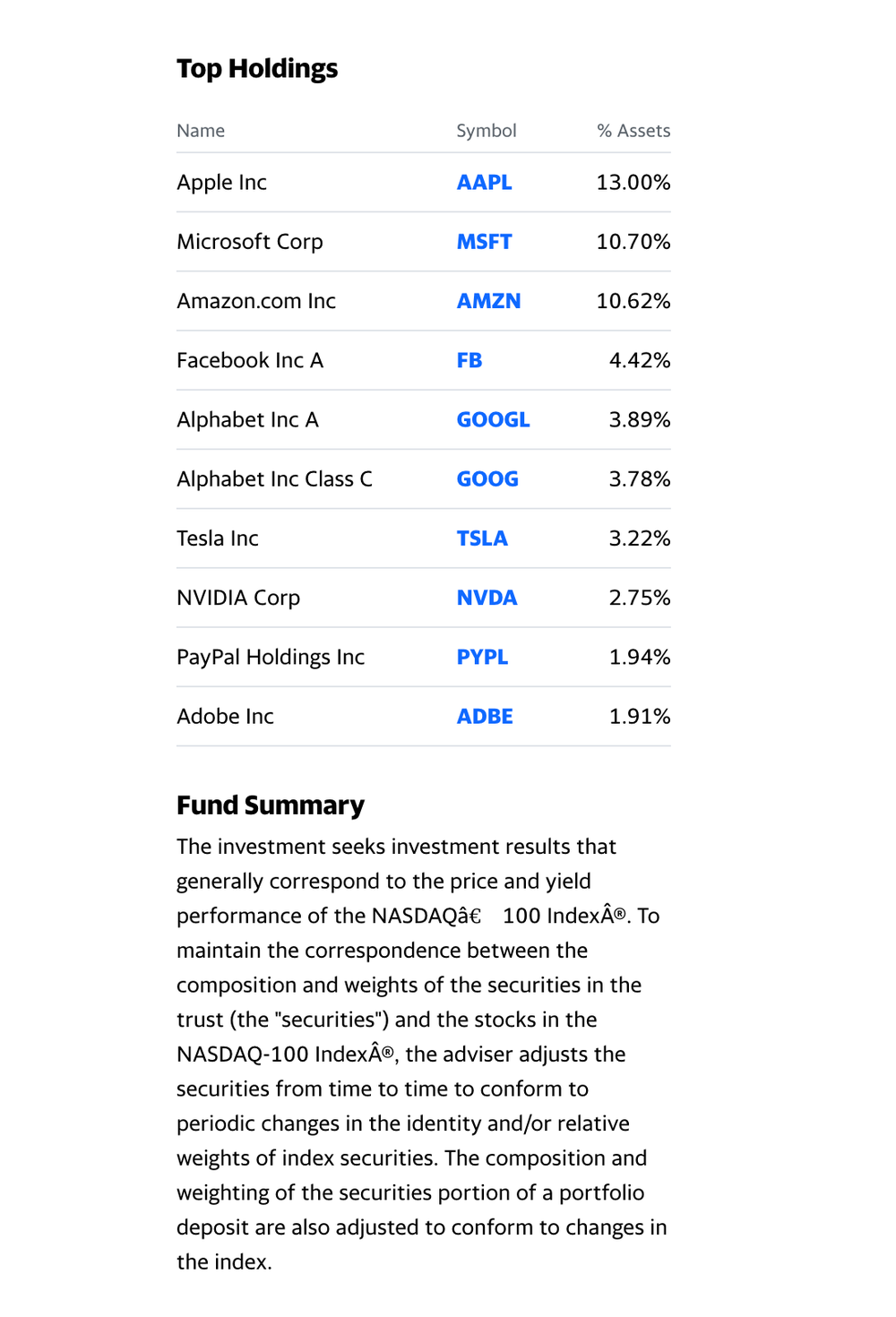 Image credit: Yahoo Finance
QQQ has net assets of around $130 billion, trades an average of over 48.15 million shares each day, and charges a 0.20% expense ratio. 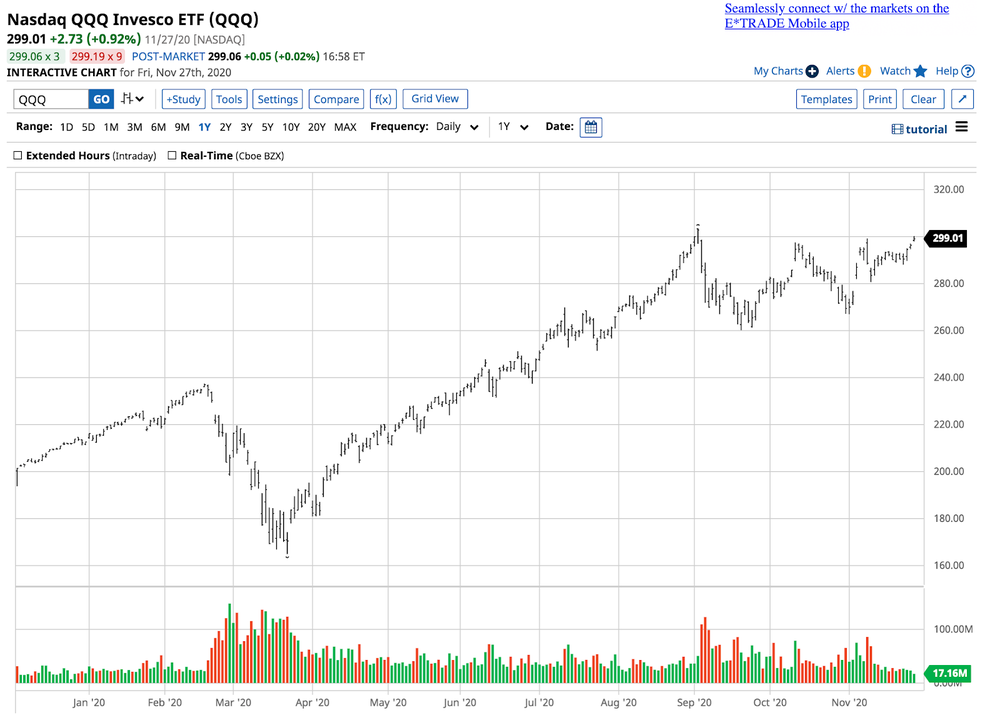 The QQQ holds shares in the leading technology stocks, including the FAANG stocks and Tesla (TSLA). TSLA shares were over eight times higher than the March low as of the end of last week.

Technological innovation will continue, but the trajectory and growth of earnings are more than likely to slow. Expecting the same rate of share price appreciation would require profit levels that are not likely in 2021 and beyond.

Increased regulation under the Biden administration and headwinds from the US Congress and European Commission could weigh on earnings over the coming years. Some politicians would like to see the leading technology companies broken into smaller pieces to foster more competition. Meanwhile, higher corporate tax rates and closing loopholes will weigh on earnings. As the global economy continues to suffer from the worldwide pandemic, increasing prices to cover the tax liabilities is not an option for the tech leaders.

We will continue to see new products and services from the technology sector that will revolutionize our lives, but earnings could weigh on share price growth after the incredible appreciation in 2020.

Rising taxes, regulations, and the potential of a breakup of the largest companies could set the stage for a substantial correction in the technology sector. However, the US and European politicians are likely to tread lightly for three reasons.

When it comes to technology, China is hot on the heels of the US technology industry. Any governmental roadblocks to US companies would only clear the road for Chinese companies to take a dominant role.

The Chinese government has allowed entrepreneurs in the technology sector to flourish, but the government keeps a tight grip on the sector as its political system considers technology innovation a matter of national security, and its goal is to dominate on a global basis. A perfect example is Amazon’s competitor Alibaba Group Holdings (BABA).

While Amazon.com, has a market cap of over $1.6 trillion, BABA is hot on its heels with its online and mobile commerce business. BABA’s market cap was at the $742.2 billion levels at the end of last week. Chinese tech companies could challenge all of the US and European tech leaders over the coming years if regulators decide to crack down on the sector.

A powerful lobby in Washington DC

The technology companies have established a powerful lobby in Washington, DC, and Europe to protect the industry. A November 21 article in The Guardian outlines the lobby’s power and influence and its impact on the incoming Biden administration. The title says it all, “If you think Biden’s administration will rein in big tech, think again.”

The President-elect appointed former employees of Facebook (FB) and Amazon (AMZN) to his transition team. Tom Sullivan, from Amazon, is headed for a senior position at the State Department. Mark Schwartz, also from Amazon, is heading for an appointment at the Office of Management and Budget along with Divya Kumaraiah from Airbnb and Brandon Belford from Lyft. These are just a few of the technology sector executives heading for government jobs in the Washington beltway.

With the US economy suffering from the coronavirus and another massive stimulus package on the horizon, President-elect Biden and his team could call off the dogs in the House and Senate regarding onerous regulations on the technology sector. Corporate taxes are likely to rise, but if the Republicans maintain control of the Senate, it could temper corporate increases in 2021 and beyond.

We are likely to see a bit more regulation and higher taxes on the tech industry over the coming two years before the US midterm elections. However, the incoming President’s team’s composition suggests that it will tread lightly because of the fragile economy and ties to the companies that are currently in the crosshairs of some politicians. Moreover, handing the technology power to the Chinese is a matter of national security for the US and Europe, which is a powerful argument for the advocates of the status quo in the technology sector.

Investors: We Have Much to Be Thankful For! (Market outlook and trading strategy plan from Steve Reitmeister)