Where Would-Be Franchisors Can Get Schooled 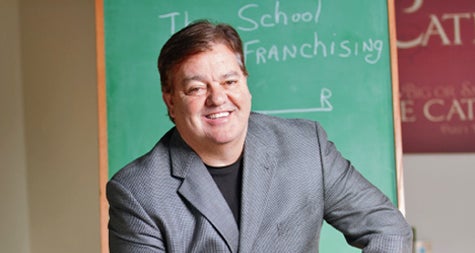 Joe Bisogno knows a thing or two about franchising. After a dozen years at McDonald's, he founded Mr. Goodcents Franchise Systems in 1989.

Now Bisogno is sharing some hard-won lessons at the School of Franchising and Business Development, which he founded in August 2010. Based in suburban Kansas City and operating virtually, the school recently graduated its first class.

Like so many other entrepreneurial ventures, the school was created to fill an unmet need in the marketplace. Bisogno tells Entrepreneur's Startups how the school provides a fast track that's an efficient alternative to a traditional BA or MBA.

This isn't your first time teaching. When you were in your early 20s, McDonald's recruited you to become an instructor in the company's franchise program.

I was a training consultant for a while, and I also taught at their Hamburger University in Chicago. Our School of Franchising takes the average business from a general business to an organized business to a business that you can franchise.

Tell us about your first graduates.
Our first graduate started franchising in January. They sort of scratched their heads six or seven months ago and said, "It's gonna take us years and a lot of money to get this done." We were able to get them to the level they're at today--all of their operations and training manuals completed, all of their franchise disclosure documents and legal work ready to go--in seven short months.

Our second graduate is going to begin franchising in April. This is a 30-year-old company that is family owned and operated. When they did the assessment and personality profile online, they said, "Would you be able to give us an evaluation of our company and whether it's franchiseable or not?"

What should potential franchisors ask themselves to determine whether their idea is franchiseable?
"Can it become cookie cutter?" The folks we're currently dealing with are individuals who have had businesses for a long time, and some are just startup companies and they don't understand franchising at all. So understanding the basics of franchising is also critical.

Most small-business owners have no clue financially where they're at. The typical answer you get when you ask [if they] have financials is, "My accountant has them." OK, when was the last time you saw them? "He usually gives them to me by the end of the month." So 30 days goes by before you even look at what happened last month? "Yeah, and sometimes it's at the end of the quarter." So you've been running your business for three quarters, and you have no idea financially where it's at?

Talk about flying by the seat of your pants.
The reality of most entrepreneurs and small-business owners is they don't have the formal education to understand how important that is to drive their company to the next level. When we work with them and they organize that portion of their busines, they're like, "Oh, my god!"

We're working with a couple of companies that are $17 million to $20 million companies, and from a financial aspect, the owner can't tell you what the depreciation and amortization is. They have no clue.

Speaking of money, a lot of prospective business owners are complaining that banks are more reluctant than ever to make a loan. Any tips?
I'm setting up an interview process with bankers. I've already worked with five here in the Midwest. I told them that if you have a small-business loan that comes to your bank, if you have that individual go to the School of Franchising and take just the assessment test and personality profile, you will know as soon as they show you those grades whether this would be a good loan.

The lending institutions have their guidelines, but they really don't know who they're loaning to. The person they're loaning to may have had someone professionally write their business plan that looks good, but the individual has no clue what's in it.

It's a $500 assessment. When they're done, they know where their business is, what they need to do to organize it, and a banker could require them to get all of those areas completed before they make a loan.

With the high unemployment rate, are many of your students people who were laid off and swore they'd never have another boss?
Everybody seems to want to be in business for themselves. The biggest issue is expense. We're giving them an entire college education in franchising for a very minimal cost in comparison to a university where they learn business administration. Here, they're learning franchising. We're the first franchise school in the world that I'm aware of.