Jake Finally Learns What A Color Strategist Does (Part I) 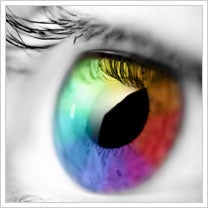 Admit it: you don't know what exactly a color strategist does or how they do it.

There's even a part of you that thinks a color strategist just throws darts at brightly colored balloons and chooses the popped ones as market trends.

I mean, surely, you can wager a guess, you can speculate, you could probably give a vague description of what they may or may not do.

Or at least I do now. I finally just asked a color strategist what their job was and how they did it. Actually, I was fact-checking an article, and I spoke with Kate Smith, color strategist, trend forecaster, consultant and delightfully warm personality. And for some clients, she remains a corporate spokesperson as well.

After making sure that we had her name, title, company and location correct for the magazine, I mindlessly added, "You know, I really don't know what you actually do."

And I certainly didn't mean any disrespect. There's an entire laundry list of consulting jobs I don't understand. However, Smith laughed it off, as apparently I'm not the first. I suggested I contact her later on to finally figure out what she does, whether for this blog or my growing interest. She was on-board from the start and quite accepting of who I was as a blunt journalist.

So I sent her some questions to:
1) help you
2) help me
3) fill my inbox with her name and further fuel speculation that I am indeed friends with the ghost of the other Kate Smith, the old-timey radio singer, often backed by Jack Miller's Orchestra in the 1930s and '40s

Kate Smith is a chairholder as well as an active member of the Color Marketing Group, the premier international association for creating color forecast information for professionals who design and market color. She is also the founder of Sensational Color, where she maintains a blog.

And it turns out that she does exactly what you think she does: she predicts what colors will be popular.

But it's not as if her office is stacked with coloring books and colorful balls of yarn. There is not only serious work that goes into recognizing color trends, but there's also a impressive talent to recognizing the world in colors.

I can only assume that Smith sees colors like Neo saw numbers at the end of the first Matrix.

"Every trend is the result of a convergence of many influences, but what drives a trend forward can usually be traced to one or two key factors. For example, often what catches our attention is a geographical location, something in the world of entertainment or pop culture, or even a major international event," says Smith. "It's not difficult to make that connection between color and the environmental movement, but sometimes understanding how what we think about translates into style and color trends is a bit trickier."

Accurately assuming that I was confused, Smith gave me a simplified example.

"From President Clinton to Martha Stewart and Arthur Andersen to the medical community, our faith in those we trusted was shaken as investigations, charges, arrests and convictions shook the nation and similar events were happening around the world," says Smith. "This prompted a global demand for transparency as we would no longer blindly trust those in charge. With so much talk about and desire for transparency, it wasn't long before delicate sheers, soft pale colors and pure white found their way onto the runway and into our homes."

And the color industry doesn't just thrive in times of moral crisis. It stays in tact through recessions, depressions and concussions. Maybe even the 10 Plagues of Egypt. In her blog, Smith suggests that the color industry will always stay buzzworthy.

"Regardless of whether we're feeling optimistic or pessimistic, happy or sad, upbeat or downright gloomy, we seek out colors that enhance or help alleviate our current mood," says Smith. "It is for this reason that over the holidays, while consumers were concerned about the economy, it was reported that the only two things that were selling were bargain prices and color."

"This is also why when doing a color forecast it is important to have an understanding of issues affecting us all on a global level. Color is the last thing I consider when putting together a forecast report. One of the first things I look at is what's making headline news," adds Smith.

But Smith didn't just wake up one day and notice that the sun was yellow and the grass was green. This subtle color obsession is an epic saga.

Well, OK, maybe not an epic saga, but she's certainly been indulging herself in colors since a rather young age.

"Unlike most kids, when I got a brand new box of 64 crayons, I wouldn't simple make pictures, but would arrange the crayons into color families or color combinations. In fact, it was often quite a while before I would actually use them to make a mark."

"The joy I found in color led me to pursue a fine arts degree. Yet even in college, I found as much pleasure in the process of understanding color as in creating with it."

"Upon graduating, I combined my knowledge of color and design with my growing business savvy in a career in product development and marketing that spanned many years with several major corporations, including American Greeting, Fruit of the Loom, Reebok and America Online."

And this brings us to this moment, where Kate Smith will tell us what colors will be popular for 2009. Maybe you should write this down. Or at least give a head's up to your web designer and whoever is in charge of product development. Because Smith is about to tell you what your customers want to see this year.

PURPLE - A color that has been hot in fashion for women, gained popularity this year among men and will remain strong in 2009. From a bold blue-based purple to a flirty red-infused purple to a hue so toned down it might be considered gray purple will show us its many moods.

YELLOW - We will be drawn to yellow, the color of sunshine and happiness because it will give us the positive lift our spirits need. Plus, it is a color that can open our mind to innovation or new thinking. As the complementary color to purple, these two trend colors will work beautifull together across industries.

BLUE - Blue will also be seen in a range of hues, from a tint so clear and light that it's almost white to one with green-gray undertones that is as deep and mystifying as the ocean or as clear and fresh as the sky. Bordering on purple to deep midnight or black, many shades of blue in 2009 will combine traditional elegance with sexy sophistication.

GRAY - In times of uncertainty, there is a renewed respect for solid foundations, ancient structures and colors that conform rather than confront. Neutral grays, color-infused grays, greige (gray beige) and an entire range of complex neutrals to the forefront as we seek stability in turbulent times.

METALLICS - During economically challenging times, we also have a renewed respect for the durability and permanence of metals. Metallic and faux metallic finishes often with a hint of color will adore everything from couture gowns to plastic plates.

WHITE - A color as ubiquitous as white isn't usually included in my trend forecast. However, in 2009, it is going to be an important color for several reasons. White, associated with cleanliness, purity and neutrality, is a color that encourages us to clear obstacles and clutter, which is exactly what may be on the minds of many as we move into the new year. With technology making just about anything possible, white now has a depth. Luminosity and an ethereal quality were not possible on most surfaces in the past. White surfaces will undulate and vibrate. Pearlescent white will replace single color surfaces and highly reflective surfaces will contrast with matte finishes.

And there you have it, the colors of 2009, perfectly predicted by a color strategist.

But if you're looking for colors beyond the primary rainbow, fear not! I came up with my own. And I asked Smith to weigh in on the colors I made up for 2009: Toasted Marshmallow, Pizzazzberry Pink, Tan & Fuschia Fusion and Wishy-Washy Blue.

TOASTED MARSHMALLOW - I like Toasted Marshmallow. You have a very definite idea of what the color is and who doesn't love the idea of warm gooey marshmallows and the sight and smell of a crackling fire? Yum!

PIZZAZZBERRY PINK - Pizzazzberry Pink is good, too. You may not know exactly what the pink looks like just from the name, but who wouldn't want a bit of pizzazz (berry) in their life?

TAN AND FUSCHIA FUSION - Hmmm...would that be 1/2 a glass of Raspberry Kool-Aid and 1/2 a glass Harp Ale? Not a fabulous name for a color...or recipe for a drink, for that matter.

WISHY-WASHY BLUE - Maybe a good name for a dishcloth or a shirt for the indecisive, but probably wouldn't be a very enticing color name for most products.

But my curiosity most certainly didn't end there. Since my pitch for a children's book called Jake Finally Learns What A Color Strategist Does didn't exactly pan out, Part II will be next week here on The Daily Dose.