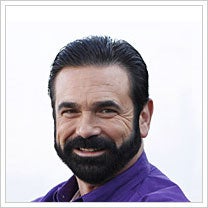 Television pitchman and entrepreneur Billy Mays died Sunday, likely from heart disease, according to reports. An autopsy found that he suffered from hypertensive heart disease, and there was no sign head trauma from a head bump he reported following a rough flight to his hometown of Tampa, Florida.

The 50-year-old's complaints of being hit in the head, possibly with baggage, during the landing of that flight over the weekend led to speculation that Mays' death might have been related. Toxicology tests are pending. Mays is survived by his wife, 3-year-old daughter and adult stepson.

Mays was arguably America's most-famous TV pitchman, and the products he hawked ranged from OxiClean to the Garden Weasel lawn tiller. OxiClean chief marketing officer Bruce Fleming issued a statement that reads, in part, "we are shocked and saddened by the untimely passing of Billy Mays, who served as OxiClean spokesperson for more than a decade and who deserves much of the credit for making OxiClean a household name. Billy was the best of the pitchman genre that he pioneered."

This year Mays signed on to be the star of Discovery Channel reality show Pitchmen, in which prospective entrepreneurs pitch their inventions to him and partner Anthony Sullivan; the best ideas are taken to market, with Mays promising to throw his full marketing weight behind them. The production company behind the show stated that it has not decided whether or not a second season will happen.

Mays began his career pitching products on the Atlantic City boardwalk and made a name for himself selling Orange Glo wood cleaning products on Home Shopping Network in the mid-1990s. The company that owns OxiClean acquired Orange Glo and the rest, as they say, is history.

He seemed to reach new heights of popularity as the economy slumped, direct advertising grew, and cheaper television time allowed his commercials to become more ubiquitous.

Fitness pitch gury Tony Little today had this to say: "In selling, you have to sell yourself first - and Billy did that incredibly well.  Of course, people can sense the real thing - and his fans knew that Billy stood behind everything he sold.  In this way, Billy was more than the ultimate salesman - he was a powerfully positive force in our industry, an awesome and larger-than-life ambassador."