By Diana Ransom June 29, 2011
Opinions expressed by Entrepreneur contributors are their own. 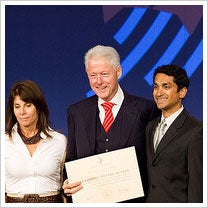 The downturn left few businesses unscathed, but those in certain cities got it the worst.

Of the 50 largest metropolitan areas in the U.S., 20 saw at least 1 percent of their small businesses fail from 2006 to 2008 -- representing 15,000 shuttered businesses, according to a new study by the Economist Intelligence Unit, an economic research organization.

Former President Bill Clinton reiterated that sober assessment in Chicago today at this year's annual Clinton Global Initiative. In response, he announced a new program called Kiva City, which is aiming to extend small businesses access to micro-loans in U.S. cities with the greatest need.

The program -- which is a partnership between Visa, the San Francisco-based micro-lending non-profit website Kiva.org and ACCION USA, a member of the ACCION Network in the U.S. -- gives small businesses access to Kiva's online community of citizen lenders who make loans of as little at $25. It kicks off today in Detroit.

Kiva.org President Premal Shah says "the needs in the U.S. are widespread and many regions simply don't have micro-finance institutions operating at scale. Now, spurred by Visa's commitment to small business, we are able to expand our reach and, as a result, open new avenues of capital for small business owners across the country." Visa provided Kiva with $1 million to get Kiva City off the ground, according to Shah.

Although Kiva had set its sights on bringing microloans to U.S. businesses in 2009, its reach has been limited to certain cities including San Francisco and New York where it has relationships with micro-lending field partners like ACCION USA, the Opportunity Fund and Grameen America. Partner ACCION USA's influence has also been limited, as the organization is based in New York.

The reason why those organizations can extend their reach today is through the help of Michigan Corps, a network of Michigan community members such as church pastors and business leaders who are both spreading the message of micro-lending and helping business owners fill out the paperwork required to access the microloans.

"Our main problem has always been a lack of awareness," Shah says. "It's possible for businesses in many cities to access microloans … but if you're a small-business owner you might think if microfinance as something that happens in Bangladesh, not the U.S."

At present, Kiva City is only open to Detroit-area businesses. However, as interested community groups step forward in other hard-hit cities like Cleveland and New Orleans, the program could expand, Shah says.

How would your small business benefit from a loan program such as this? Leave a comment below and let us know.