By John Shinal November 14, 2011
Opinions expressed by Entrepreneur contributors are their own.

In August, Gowalla, an Austin, Texas-based location-service startup, was growing at a rate that would thrill most entrepreneurs. After a high-profile launch in 2009, it had reached 2 million users in just 18 months. The problem? Rival Foursquare was growing even faster, leading one influential tech blog to declare: "Foursquare has won the check-in wars." 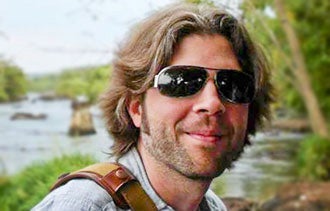 Josh Williams, co-founder and chief executive officer of Gowalla, on a trip to Argentina with TOMS Shoes, one of Gowalla’s corporate partners, to deliver TOMS's one millionth shoe. Gowalla recently changed course to focus on the travel business.

So Josh Williams, co-founder and chief executive officer of the 32-employee Gowalla, did what founding CEOs often find it hard to do: He pivoted, and fast. In an Aug. 25, blog post, he told users that Gowalla had to make "some difficult decisions," including the removal of several features that were favorites of his, theirs and the Gowalla team that had designed them.

Two weeks later, Williams unveiled Gowalla's new identity to press and investors at San Francisco's TechCrunch Disrupt, a high-profile showcase for startups. Gowalla, he said, would now focus mainly on recommending activities and attractions to users based on their location, and he announced several content-licensing partnerships, including two with Disney and National Geographic. The changes put greater emphasis on features that were most popular, and therefore have the most potential to make money. One of the features killed off, Notes, was adopted by less than 10% of users, says Williams.

The willingness to pull early product features -- or even entire products -- is an important part of many successful pivots, says Eric Ries, a three-time entrepreneur and author of The Lean Startup (Crown, 2011). And it's the emotional hurdles that make these big changes so difficult, says Ries. Employees, management and users often have developed strong ties to a product or feature, making it hard to kill a product, even if it finds little traction in the market.

But the round-the-clock hours that your star developer worked for weeks to perfect a particular feature doesn't necessarily have any bearing on your company's future success. "Customers don't care how long it takes to build a product... they care only whether it's useful," says Ries, who is also chief technology officer of the instant messaging startup IMVU.

To pull off a successful pivot, CEOs must react quickly to shifting customer needs and include customers in "a decision loop that is astronomically faster" than one at a typical large enterprise, Ries says.

With that business practice in place, startups can develop product-upgrade cycles that are fast and responsive to a changing marketplace.

Startup companies learn from all phases of the product cycle, from prototyping to announcing to shipping, according to Ries.

When certain of Gowalla's features, such as its Notes function, failed to interest the majority of its users, Williams axed them.

Communicating with employees and customers openly, honestly, and often, was another smart move. "That makes it easier to sell things later," says Ries. Williams used his blog to let everyone know changes were coming and continued to blog during the rollout of Gowalla 4.0.

Still, the actual unveiling of Gowalla 4.0 got off to a rocky start. On Sept. 28, the day it was released, users had to learn how to navigate new features and accept that the old ones were gone. Over the next two days, Williams published lengthy blog posts addressing complaints, exhorting Gowalla employees and encouraging users to try the new Web site.

"We realize the user interface for creating a new [post] is still a little bit jarring if you're used to checking in... My hope is that you can squint a little through the pain of losing a version of Gowalla that many of you loved in order to see something truly unique and remarkable that we can build together now," Williams wrote.

Now that Gowalla is pointed in a new direction, Williams has some advice to entrepreneurs pondering a similar change in direction: Make sure your investors have entrepreneurial experience of their own. His board, which backed his changes, includes LinkedIn founder and CEO Reid Hoffman as an observer.

"In the lifecycle of a startup, you're going to hit some rough patches," Williams says. "You don't want people on your board who lose faith quickly and hit the panic button."