Colleen DeBaise
May 21, 2012 3 min read
Opinions expressed by Entrepreneur contributors are their own. 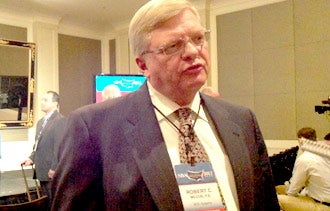 The Small Business Administration's National Small Business Week is an annual love fest of sorts for the agency and a select group of successful entrepreneurs.

But some business owners invited to this year's conference publicly expressed their frustration at the pace of economic recovery and questioned the SBA's ability to address the concerns of financially strapped entrepreneurs.

During the question-and-answer portion of a town-hall style forum Monday, business owner Bob McCue of Philadelphia asked SBA Chief Karen Mills what he should do about his predicament, which he described as a "reality" for most small-business owners.

Compared with a few years ago, "I've got less employees. I had to dumb down the health-insurance plan," he said, speaking at a microphone in a room filled with about 300 attendees. "None of the tax cuts apply to us."

McCue, who has owned MDC Systems in Philadelpia for 15 years, said he's unsure whether it makes sense to keep funding his engineering firm's 401(k) plan. He's worried that his small bank, under pressure from regulators, might pull his line of credit.

And he said he's most concerned that his wife will wake up some morning and say, "‘You know honey, I am not going to sign for that bank loan anymore,'" as the couple needs to prepare for their own retirement. 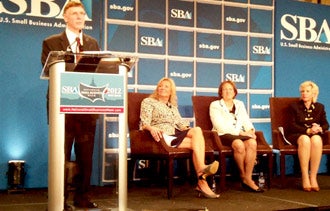 From the stage, Mills responded that McCue's story is something "I've heard from small-business owners across the country."

She said the agency is working on getting business owners greater access to credit, in part by "having constant conversations" with regulators "to make sure they are focused on the needs of small businesses."

Mills also said she was optimistic that healthcare reform, scheduled to take effect in 2014 if upheld, will create exchanges where "insurance companies will be bidding on the needs of small business owners."

The chief also urged McCue to talk to SCORE, an SBA-affiliate that provides free counseling, about getting advice regarding retirement needs.

Two other business owners who went to the microphone complained about the lack of credit, saying banks weren't extending loans, especially to service companies that don't have assets.

However, several entrepreneurs who had questions for Mills thanked the agency for providing assistance, especially through its Small Business Development Centers.

Kristie Arslan, president of the National Association for the Self-Employed who just started her own gourmet popcorn company, said she had received "invaluable support" from an SBDC.

Still, after the forum was over, McCue said he doesn't think the SBA or other Washington officials truly understand his struggle. "I don't think they see it," he said. "They live in a world inside the Beltway."

He added: "I think I am 95 percent of the business owners. A lot of people here are on talking points."