The Good, the Bad and the Ugly of Business-Plan Competitions

By Matt Villano July 25, 2012
Opinions expressed by Entrepreneur contributors are their own.

Not all business-plan competitions are created equal.

Some not only pay better than others, select competitions carry far more prestige. Still others require careful consideration, as some contests ask winners to fork over equity in their business -- fine print that could wind up hurting a startup attempting to land investors down the road.

Of course, the fact that competitions offer dissimilar costs and benefits is hardly a news flash for the many young entrepreneurs who've participated in the contest circuit. But for those who are itching to start up -- and lasso funding to do it -- consider this your tutorial.

Keep your eye on the prize.
Many business-plan competitions -- especially those affiliated with business schools -- yield relatively small potatoes: $5,000 here, $10,000 there.

By contrast, corporate-backed contests, such as the MillerCoors Urban Entrepreneurs Series business plan competition and a contest sponsored by the Hitachi Foundation, dole out to winners $50,000 apiece. Still others, like MassChallenge that bill themselves as accelerators and include a competition component, divvy out serious cash -- more than $1 million in cash prizes overall. 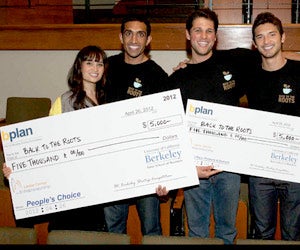 Back to the Roots took home a total of $10,000 from Bplan, the startup competition at the University of California, Berkeley, where Nikhil Arora (second from left) and co-founder Alejandro Velez (far right) went to school.

Arguably the best strategy is piecing together money from a variety of competitions. Just ask Nikhil Arora, co-founder of Back to the Roots, a Berkeley, Calif.-based company that sells do-it-yourself kits to grow gourmet mushrooms. Since BTTR was founded in 2009, the company has won roughly $130,000 in more than two dozen different competitions.

"We've won enough that we actually haven't had to raise any money yet," says Arora, noting that the company expects to generate $5 million in revenue this year.

Make the most of new contacts.
The chance at winning big bucks isn't the only reason to compete. In many cases, participation prompts young entrepreneurs to think about their business plans in new ways -- a process that can help them refine their message and their brands.

Another benefit: top-tier advice. In many contests -- especially those sponsored by business schools -- judges and other competition organizers reach out individually to applicant companies both during and after the evaluation stage. That process can often help entrepreneurs establish new contacts and mentors to help grow the business.

This was the case for Erin Lewis, co-founder of Fashion Forward Maternity, a maternity-clothing rental service in Lafayette, Colo. Though her company has won a total of almost $70,000 in five different contests since last November (including second place at the 2012 Accelerate Michigan Innovation Competition), she says the people she's met along the way have had the biggest impact.

"We've gotten help and input from so many, and we always come away with new ideas and new things we've learned," says Lewis.

Related: How to Get the Most out of the Next 54 Hours

Manage your time wisely. Still, there are downsides to competitions of this nature. Most entrepreneurs estimate they spend between ten and 40 hours prepping the application packet for each competition. But some owners like Natalie Meza, the CEO and founder of Averyboo Arts question the ROI from all of that effort.

This spring, the Long Beach, Calif.-based creativity center for kids ages 2 to 9, entered Averyboo into the 2012 Chase Mission Small Business contest. All told, she estimates having spent about six hours on the application packet--a significant investment, considering that she handles almost all of the company's day-to-day operations.

"I wonder if my time would [have been] better spent on completing my new website and summer marketing," she says. Of course, if she wins, her story may change. Winners are expected to be announced in early September.

Related: Pitching in the Big Leagues: Perfecting Your Elevator Pitch

Watch the fine print.
Beyond practical concerns about time management, many business-plan competitions are rife with some of the same potential pitfalls that exist whenever an entrepreneur puts his or her ideas on the line. Claudia Espinola, whose Boston-based footwear company Casa Couture won a 2011 award from MassChallenge, notes that the biggest dangers can come from being affiliated with the competition itself.

"With some competitions, applicants are required to give up equity or a portion of future royalties if they win prize money," she says. "The cost of [doing] this before seeking outside investments may be a deterrent to would-be investors who are concerned about dilution."

Disclosure can be a problem, too. Many entrepreneurs don't realize that once they've brought the basic tenets of an idea into the public domain, the clock on the patentability of that idea starts ticking.

What are some other reasons for and against participating in business competitions? Leave a comment and let us know.