By Lyneka Little February 24, 2013
Opinions expressed by Entrepreneur contributors are their own.

In entrepreneurship, as in life, timing is everything.

Just ask Jon Crawford, the 31-year-old founder of Storenvy. Though his social marketplace -- that sells everything from cat-print ankle socks to rhinestone and hair covers for iPhones -- recently landed a $5 million round of financing led by Intel Capital, investors haven’t always been so giving.

In 2010, Crawford got the chance many young entrepreneurs dream of: Entry into the much-coveted Y Combinator program, after the deadline for applications had passed. He adds that he didn’t even need to fill out an application to enter the San Francisco-based incubator program. YC wanted the company in, and it showed.

Yet in a matter of days, Crawford’s YC hopes were dashed. Faced with having to move to the Bay Area for the program, his co-founders floundered. And Crawford, who also faced relocating for the opportunity, found himself managing the startup alone. What’s more, the loss of his co-founders proved too significant for YC, and Crawford was booted from the program.

“I didn’t find any new co-founders although I tried,” Crawford told Young Entrepreneur. Between recruiting, team leadership, product road mapping, he says, “it’s extremely challenging being the single founder of a company.” But, the self-taught programmer kept his chin up and started an intense regime of networking that even involved his wife, who took on the role of co-founder over the period. 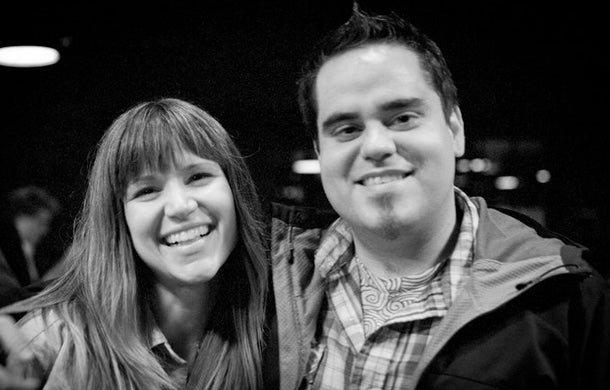 Janette and Jon Crawford in 2011, at a Y Combinator dinner in NYC.

“We were both in absolutely fight-or-flight mode as soon as we moved” to San Francisco, says Crawford. “We did any and everything to make the company survive and push the company forward.”

So far, that hustle has worked out. In addition to the new $5 million series-A funding round, Storenvy raised a venture-capital seed round in 2011 from Spark Capital, First Round Capital, Kleiner Perkins and CRV. The team of seven is also now hiring.

The four-year-old company, which boasts itself as a “free” marketplace “with no set-up fees, monthly fees or listing fees,” has also attracted more than half a million registered users and roughly 31,000 businesses.

We chatted with Crawford about getting attention from investors and the evolution of retail:

Q: If Storenvy is unlike Etsy, what’s a better comparison?
A: Storenvy is ecommerce for the Tumblr generation. The big difference between Etsy and Storenvy is our net is much wider. Some stores earn $10,000 a month for designer toys, metal studded hats and hair extensions.

Q: How did you get the attention of big-time VCs and also win funding?
A: Relationships and traction. Investors pay attention to intros from people that they trust. So when another startup founder they’ve funded makes an introduction, it goes on the top of the stack. I spent six months networking and befriending other well-connected startup founders before I set out to raise our seed round. Then when the time came, those warm intros got the conversation off on the right foot.

Once I got in front of investors, we had terrific traction to show for ourselves. We had almost 2,000 merchants using our platform pushing meaningful transaction volume through the site. All while being bootstrapped and no employees. Investors look past ideas and demos to see if you’ve been able to connect with real customers in measurable ways.

Q: How do you think the retail industry will evolve in the near future?
A: The biggest problem I see in retail is discovery. The people who want to buy your stuff don’t know you even exist. But I think independent retailers have the most to gain from the ever-evolving social web. Sites like Pinterest and Storenvy encourage a world in which product discovery through the social web is so powerful that totally unknown designers can quietly release fantastic products that organically spread like wildfire.

Q: Do you have any advice for young entrepreneurs?
A: The best advice is the advice people don’t want to hear: Go work for a good entrepreneur so you don’t have to learn everything the hard way. Investors love to throw money at people who have worked at another company.

It gives you the track record as someone who is able to work on successful things. It also helps you build a network. Get in the head of what investors look for and get good contacts with others that have been funded.