Eye on 'Gig City:' How Startups Thrive in Chattanooga

By Kristin Luna May 29, 2013
Opinions expressed by Entrepreneur contributors are their own.

Chattanooga, Tenn., may not seem like an entrepreneurial hot spot, but it is proving to be a great launching pad for more new ventures. Just ask Matt and Tiffany Rogers.

The couple, who already owned Everyday Eclectic, a home-based soap and candle-making company, decided to jump into starting a second business. They first thought of tea, but then settled instead on soda.

"We love handcrafted products, especially food products," says, Matt, 33. "We really saw the excitement people [in Chattanooga] had around food entrepreneurs and small businesses in general."

Matt coaxed friend and colleague Shawn Clouse, 38, into joining the project, and in July 2011, Pure Sodaworks was launched as a cart with half a dozen flavors made of natural ingredients at the Chattanooga Market. 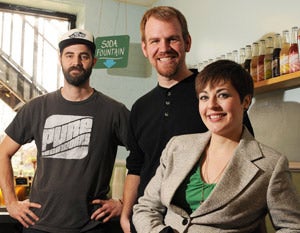 Shawn Clouse (from left to right), Matt Rogers and Tiffany Rogers went from peddling their all-natural sodas out of a cart to running a quickly burgeoning enterprise.

The weekly market, which is modeled after the roughly four-decade-old Saturday Market in Eugene, Ore., has proven to be crucial for startups like Pure Sodaworks. For a nominal fee, vendors can apply to have a booth at the Sunday marketplace, which runs from April through December. On an average week, the nonprofit marketplace attracts 120 to 150 vendors and tens of thousands of attendees.

"Chattanooga Market is an incubator of sorts, a way to do a proof of concept on an artistic product or a food product," Matt says. "You have an idea or the means to produce it, then right away, you can take it down to the market and see how it does with consumers."

In the words of the Chattanooga Public Market's executive director Chris Thomas, it's a "cool, cultural community hub." And it's picking up steam. In 2012, $2.5 million in direct vendor sales traveled through the market, compared to $700,000 five years before.

"It's a great feeling," says Thomas, 44. "People really want to support their neighbors." Further, he adds, starting with a booth at the market reduces a new company's risks, since owners can skip the overhead attached to opening a brick-and-mortar store. "Where else can you market your concept to 20,000 people on a given day for just $20?"

Thomas and his team are taking the same approach with Chattanooga Workspace, a arts-focused co-working space in the community. The location opened in January with more than 35 private studios.

Related: How Entrepreneur Friendly are the Top 10 Startup Hubs?

Chattanooga has been a tech hub in the making since EPB, a community-owned provider of electric power to the area, introduced a fiber-optic network in 2010. The Department of Energy awarded EPB $111.5 million in stimulus funds to develop its smart grid network, and by the end of 2012,170,000 homes EPB services were able to access the technology. 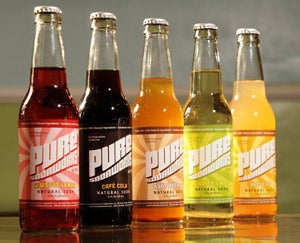 Chattanooga, now dubbed "Gig City," suddenly laid claim to the fastest internet connection in the country –at a download speed of one gigabit a second, or 200 times faster than the national average. That helped pave the way for aspiring entrepreneurs to move in and launch their startups.

Pascal Finette, director of the open innovation group at Mozilla, traveled to Chattanooga last August to judge a think tankcompetition called GIGTANK. "I like the energy in Chattanooga. I really like their grassroots entrepreneur spirit. It's a great place," he says. Still, he's skeptical that the small Southern city has what it takes to be a major tech player. "Everybody wants to recreate Silicon Valley," he says. "The challenge is usually density of talent, and that's a problem. Chattanooga isn't really on the map for a lot of people."

Ok, so it may not be the next Silicon Valley. But Chattanooga has proven to be a solid home base for Pure Sodaworks. After its successful debut at Chattanooga Market, Matt and Tiffany, 35, knew they'd need to invest in bottling. So, they turned to Kickstarter to find some cash.

Related: Which State Is Best for Small Business? (Infographic)

Pure Sodaworks raised $23,111 -- besting its goal by more than $3,000 -- in one month with its campaign. The young founders opened their Coolidge Park storefront last May. "Those were some scary times," Matt says. "It was definitely a slow trickle… But everybody rallied in the last two weeks, and we surpassed our goal."

In October 2012, the custom-made bottling machine that the Rogers had ordered arrived from California, and the company started bottling six flavors. Currently, the team of three owners and three part-time employees is trying to build up enough stock so they can start supplying restaurants. Roughly 40 have already committed to carrying the product.

Though Chattanooga has been good to Pure Sodaworks, the founders hope to eventually move beyond its borders. "We'll really be pushing hard in terms of potential regional distribution -- North Carolina, Georgia, maybe even Whole Foods if we can," Matt says.

What's the secret ingredient of the startup hub near you? Let us know in the comments below.