By Diana Ransom August 9, 2013
Opinions expressed by Entrepreneur contributors are their own.

For aspiring young entrepreneurs, deciding whether to attend college to study business and entrepreneurship often comes down to dollars and cents. That decision may soon require a few less pennies -- but possibly only for the time being.

Today, President Obama is expected to sign into law a bill that would both reduce interest rates on all new federal student loans and tie them to financial markets going forward. The law is expected to impact 11 million borrowers -- leading to a savings of thousands of dollars over a loan's lifetime. Yet many students and education advocates alike are expressing concern that the law could lead to higher student-loan rates in the long run.

The new law would roll back rates that had doubled to 6.8 percent on July 1, when Congress initially failed to agree on a deal preventing the hike. For new loans taken out after July 1, undergraduates would pay 3.9 percent, graduate students would pay 5.4 percent and parents taking out PLUS loans pay 6.4 percent. Previously, rates for PLUS borrowers stood at 7.9 percent.

Related: The Changing Economics of Student-Loan Debt: How to Pay It Off and Startup

While the new lower rates are fixed over the life of the loan, they may change over time as they will move along with the 10-year Treasury note – causing new borrowers to potentially face having to pay higher rates than what they would have paid under the existing law. Rates on new loans, which will vary depending on the 10-year Treasury note (now around 2.6 percent), will be capped at 8.25 percent for undergraduate, 9.5 percent for graduate students and 10.5 percent for PLUS loan recipients. 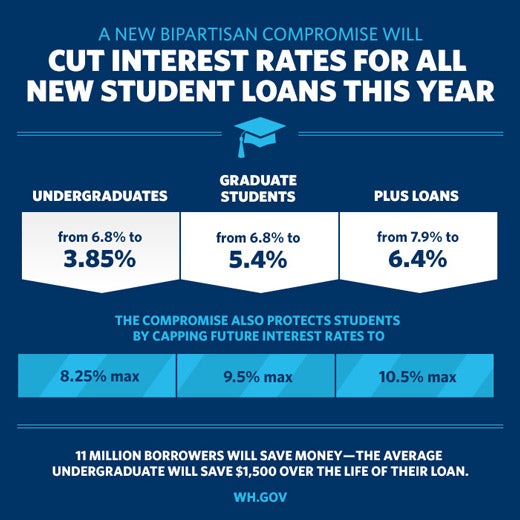 Sen. Elizabeth Warren (D. Mass.), a former academic who helped establish the U.S. Consumer Financial Protection Bureau, called the plan to hike rates on student loans "morally wrong" in a conference with young people in July. "The government should not be making profits off the backs of our students," she said.

Warren and other critics of the law claim that these new rates may drive some worthy but potentially less-well-off students away from higher education. Similarly, for those aspiring to become entrepreneurs, going deeper into debt has the potential to greatly diminish the risks they're willing to take. So in addition to having a less educated population, there's potential that future job opportunities will also be lost.

For years, Congress imposed fixed rates on subsidized Stafford student loan for undergraduates. The past year, undergraduates paid 3.4 percent on their loans, while unsubsidized loans stood at 6.8 percent.

Would higher student loan rates make you think about going to school as an entrepreneur? Let us know your thoughts with the comments.