Bloomberg TV's Matt Miller is currently experiencing the "12 Days Of Bitcoin," a series for the business news television station.

On Friday, Miller learned an important lesson. It was an experience that everyone should remember before they start moving their money into the digital currency.

While on air, Miller surprised Bloomberg anchors Adam Johnson and Trish Regan each with $20 worth of Bitcoin.

But as Johnson received the paper gift, he briefly exposed the QR code (see above). This act was effectively like sharing a bank account and PIN number.

Immediately, someone lifted the QR code and stole the $20.

This morning, Miller reported that he had engaged the thief -- someone who goes by "milkywaymasta" -- on Reddit.

I was watching bloomberg where they are doing the "12 days of bitcoin". The guy that is hosting the series gave bitcoin gift certificates to the other two hosts. One of them opens up the certificate to reveal QR code of the private key. They then proceeded to show a closeup of the QR code in glorious HD for about 10 seconds. Hilarious.
...
I took it, it was only $20 worth. It was exhilarating nevertheless. I'll send it back once Matt gives me a new address since someone else can sweep the old one. A segment on Bitcoin security and the importance of NOT showing the private key and also BIP0038 (Password Encrypted Private Keys) Wallets will be more than enough compensation. Blockchain confirmation and Public key of where i sent the bitcoin.

Miller, however, is done with this person. Here's Miller: "so freaking classic but also a GREAT lesson in bitcoin security! you can keep the $20 -- well earned."

As long as there are no laws in place for such thefts, one could probably argue that the money was indeed "earned."

Regardless, a great lesson.

Here's the Redditors statement and Miller's response from the Reddit thread: 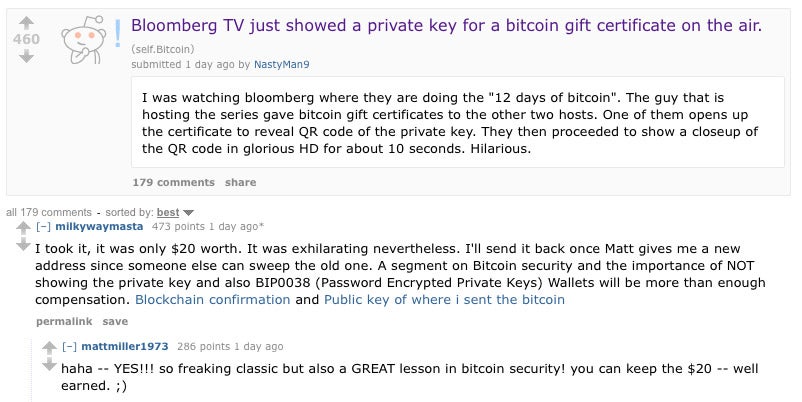 Sam is editor of Money Game.  He has been published on Forbes, DealBreaker, and The Fiscal Times.  He was the senior equity analyst for the Forbes Special Situation Survey and Forbes Growth Investor equity newsletters.  Sam has also held positions at James F. Reda & Associates, Brown Brothers Harriman, and Paul Weiss. He holds a BA in Religion from Boston University, and he is a CFA Charterholder.

Disclosure: Sam's investments include ProShares Ultra S&P 500 (SSO) and various equity and bond mutual funds. He does not trade frequently.