So by now, you’ve probably heard the news: Eat24, a food delivery company, has officially broken up with Facebook.

Because, dear reader - it only takes a single spark to start a fire.

Just last year, Facebook announced a change to its news feed that put some advertisers on edge. It had to delicately juggle relevant news and updates with all available news and updates, and independently judge (using a variety of signals given by you, the user) which were most important.

That unfortunately meant that not every post was deemed a “winner”, which meant that outright advertising (from a page you may have liked long ago) got relegated to the bottom of the heap. 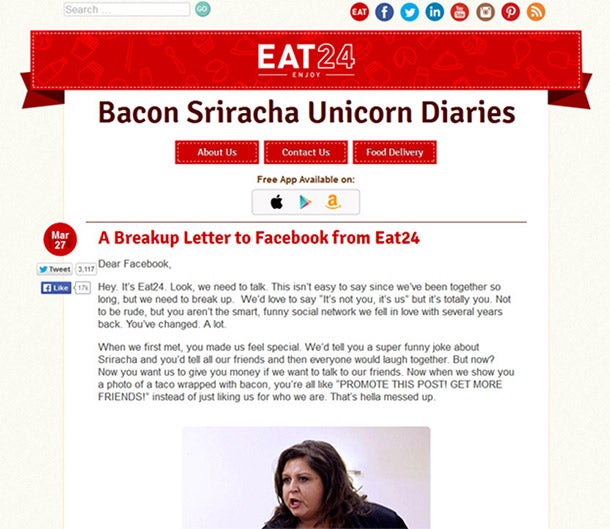 If you wanted to make your post more important - and therefore rank higher in a user’s feed, you had to pay for it.

Even Then, There Was No Guarantee...

In fact, you could pay $600,000 to promote yourself, and be rewarded with thousands of new likes and follows from bots, spammers and scammers - and no ROI to show for it.

“Too bad.” Facebook says, “We’re a social network, not an ad platform.”

Fair enough. So what if you’re a brand with a pretty enviable following - say, 500,000 likes or more, and you don’t want to advertise, but rather show up in news feeds organically?

That sounds like a sound strategy - except studies have shown that the results are disastrous. 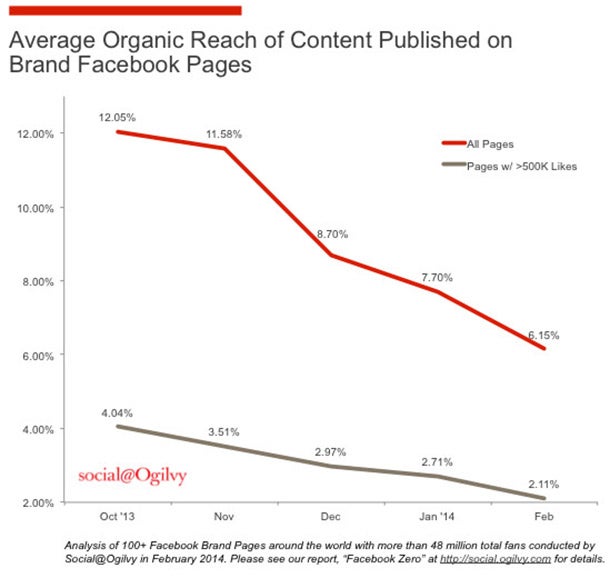 For you, enviably-liked brand on Facebook, your organic listings will only reach, on average, 2% of your fan base. And the number is dropping.

Don’t Be Boring - Or Else

Facebook’s strategy does have a point, much to the hand-wringing of advertisers.

The only way that posts can redeem themselves organically is by not being boring. Something they should have been striving for anyway.

The truth is, not everyone is going to care that Bud Light in sponsoring the latest UFC match - even if they regularly follow one brand or the other. The brand wants the viewers’ eyeballs, the viewer wants the brand to give them something more relevant.

So what can be done to please both sides? Here are a few ideas.

Rather than just posting a text status update or just a photo - combine the two into a photo that can easily be understood at a glance.

These types of photos often get shared (see the “This is what 200 calories looks like” example below), and the more likes and shares an update has, the more likely it will appear in the news feed, even if it’s older than something more recent that happens to have less engagement. 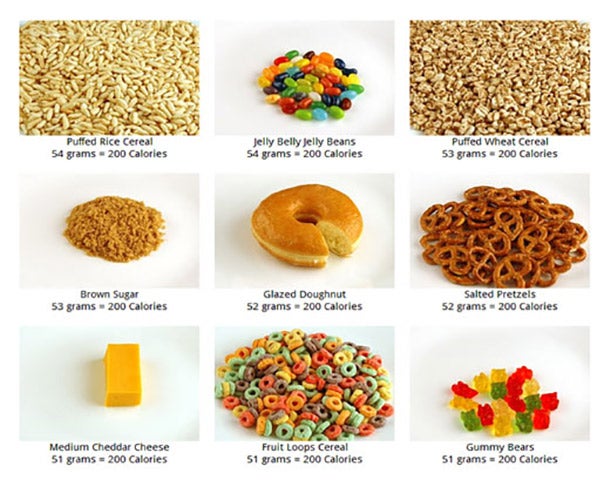 When people see numbers translated into the impact they have on everyday life - things become much more clearer to them, and they’re more likely to pass the a-ha moment on to others.

Gauge Attentiveness with a Quote

It may seem old fashioned, but it still works. A good quote, whether one of your own or one of your favorites, has the ability to generate quite a reaction, as Joe Gascoigne at Buffer discovered. He posts quotes and then notes the reaction he gets: 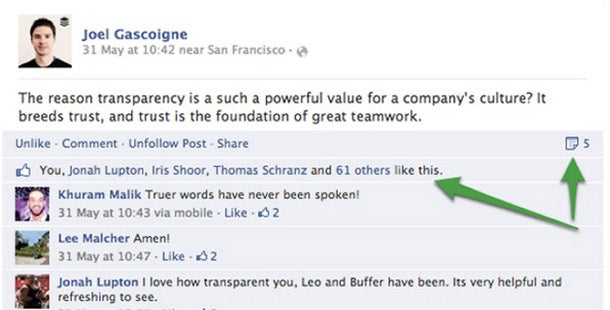 If he gets enough traction, he turns that quote into a blog post. If you liked this quote, how likely would you be to read an accompanying article about “How to Be More Transparent in Your Business”?

If one bright spot can be gleaned from the harsh reality of Facebook advertising, it’s that link-based posts’ status in the news feed seems to have improved quite a bit since before the December shift. ShopIgnite did a little digging into this phenomenon, and learned that, of posts made by fifteen different major brands, text-based updates dropped 65%, video and photo-based updates stayed about the same, and link-based posts jumped 30% - 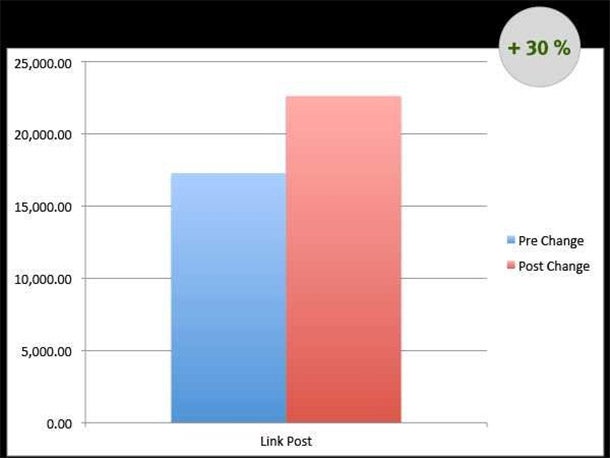 Does that mean you should immediately scrub your campaigns of everything but link-based posts? Not necessarily. But it does stand to reason that by directing more traffic to your site, rather than using Facebook as your social campfire setting, you’re potentially building a more direct consumer-to-company relationship - and you don’t have to pay a dime for it.

Is This the Beginning of the End?

It shouldn’t be surprising to note that many advertisers are abandoning the Facebook ship, feeling like their marketing dollars could be better spent on more targeted advertising methods or better content outreach. There’s a noticeable push toward letting the social network remain social while courting new ad networks looking for a decent ROI.

Do you think Facebook has run its course? Have they spent too much of your money trying to “find themselves” with nothing to show you for it? Or are you still enjoying considerable success with Facebook ads? Share your stories with us below in the comments!