Ari Yakobson wasn’t aware of the growing trend of blow-dry bars when he stumbled upon the three-unit chain Blo Blow Dry Bar in 2008.

“Being blunt, at first I thought the Blo concept was ridiculous and wouldn’t work,” says Yakobson, who at the time owned a chain of children’s hair salons across Canada. “But I took a look at the numbers and became intrigued. I saw the business model and systems and thought it could become massive with a little injection of capital.”

So he bought Blo and began franchising the concept, which now has 50 units internationally; he hopes to add 15 to 20 units in the next year. In June 2014 the concept got an extra boost when actress Gwyneth Paltrow and her longtime hairdresser, David Babaii, partnered with the company. Now Paltrow offers advice on the salons’ interior design and social media strategies and helps market the growing brand.

We spoke with Yakobson and his wife, co-owner Vanessa Melman Yakobson, about how Blo is blowing away the franchise world.

What exactly does Blo do?

Vanessa: Women come into Blo between hair appointments. We don’t do cuts or color; we just wash their hair and then style it with a blow-dryer. Our tagline is that you’re not cheating on your hairdresser. It’s an affordable luxury, like going to Starbucks. You can afford to look your best on a weekly basis. Our styling can last for days, and we always give clients advice on how to preserve the styling and how to keep it tied up at night.

Who is your clientele?

Ari: This is really no different from a manicure. That used to be special, but now people do it on a weekly basis. We have some clients who come in four times a week. We do well with working women, from executives to secretaries to lawyers—anyone who wants to look their best.

Vanessa: It’s a spectrum. Some choose it for special occasions, and some women do it weekly or biweekly. We open at 7 a.m. by appointment for women who have an important presentation or meeting at work. It’s not all super-styled party hair. We do regular polished hair, too, for everyday. And we keep up with trends. For instance, in the last couple of years, braids have become very popular, so we’ve added styles with braids. We have a new look book coming out later this year. 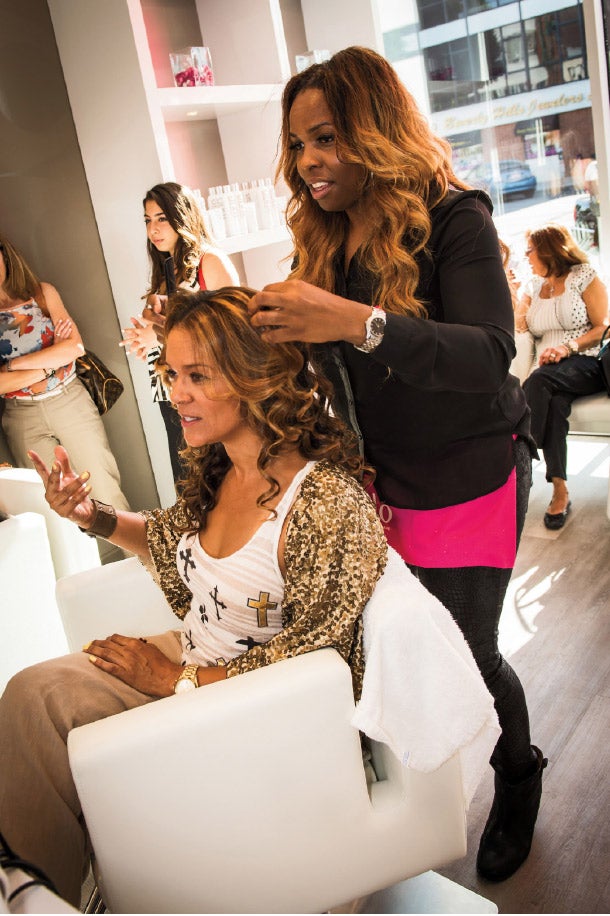 Why did you decide to franchise?

Ari: We had franchising experience with our children’s salon, and we believe franchising helps us to scale. It’s better to have a partner who cares about the business than an employee. Our growth has been very controlled. We could open 500 stores right away, but we want good partners. Our franchisees run the gamut from executive women who took a few years off and now want to own their own business to marketing professionals who walked into our store and wanted to open their own. We’ve grown without doing any franchise shows or investing significantly in advertising. So far, everything has been by word-of-mouth.

Vanessa: What’s really appealing to most franchisees is that we’re low-cost and have a turnkey system. It’s a great way for them to get into business with an economic model that makes sense.

Is this a business with staying power?

Vanessa: We’ve been around since 2007, and I think we’ve proved it’s not just a trend. Five years ago people told me the market was going to disappear. But we think its capacity is no different than nail bars. Anywhere women want to look good, we can open a Blo. In fact, this type of service is increasing in popularity, and we have many copycats, which we consider a great thing.

We were first to market, we’re the largest, and we continue to hold our share. This concept is here to stay and will continue to grow.