Amazon, Google and Wal-Mart are waiting for the day when they can deliver goods with flying drones. Meanwhile, a small Estonian robotics start-up sees more opportunity on the ground.

Starship, created by the founding engineers of Skype, Ahti Heinla and Allan Martinson, is aiming to send robots on sidewalks with medium-size packages or grocery bags to suburban homes.

Sharing the sidewalks with robots has all sorts of scary implications. But here's why it could work. 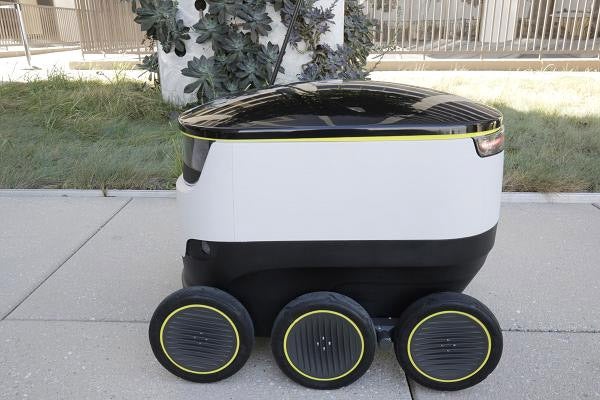 The idea is that fleets of Starship robots will gather packages at a central loading hub. Then customers order a delivery when it's convenient for them with an "Uber-like app," said Starship COO Allan Martinson. You order your package, it comes within 20 minutes and then the robot automatically returns to the hub after the package has been claimed.

The robot uses GPS, sensors and cameras to travel on sidewalks at the same pace as a person and can make it up and down curbs and small stairs. It will stop when there is an obstacle or pedestrian in its path. If someone tries to mess with the robot, a human operator at a central control center can scare the thief away via a speaker and call the police. The robot has a microphone on it for two-way communication.

The engineers also said they put a lot of effort into making the robot "cute" so pedestrians would accept it.

The last mile is the most cumbersome and expensive part of delivery, especially in suburbs when drivers go from house to house, getting out of the van, knocking on doors and so forth. UPS even went so far as to eliminate left turns from delivery routes to shave off precious seconds and dollars.

"This part of delivery can be done using a robot," said Starship CEO Ahti Heinla. "This is not rocket science. This is simpler to do than a self-driving car from a technological standpoint." 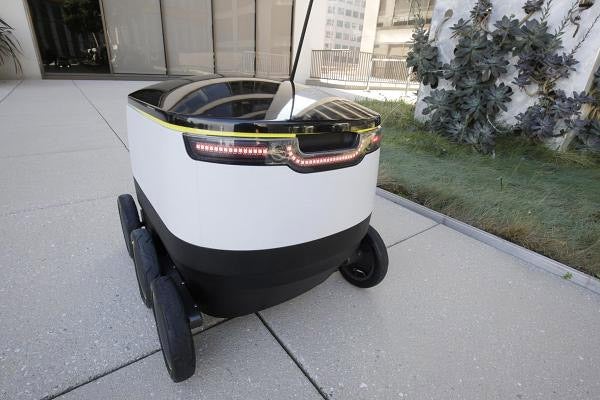 Heinla said they are talking to "all of the companies you would think of" in the logistics industry and that "there is certainly a lot of interest," but he declined to name specifics.

Starship hopes to sell its robots to major logistics companies. The cost of the robot is currently less than $2,000. Heinla said Starship robots would cost less than a dollar for each delivery and in the future when scaled, this last mile could be essentially free.

"If this new technology is really feasible, FedEx and UPS will both be at the forefront of using it and developing it," said Donald Broughton, senior transportation analyst at Avondale Partners. But he said these robots would face the same regulatory and safety hurdles as delivery drones.

"God forbid a drone or a robot hits a toddler, or kills a cat or a dog," Broughton said. "The liability is just too high."

The founders claim Starship robots are far safer than delivery drones because the robot only weighs 20 pounds and moves slowly. Heinla also said the operators could always take over control of the robot if need be.

Unlike Amazon, Google, etc., which are working with the FAA on flying regulations, Starship is entering new territory with ground robots. Some countries and states do not yet have rules in place about use of autonomous robots. But the founders are confident they can persuade regulators to be open to the idea of sharing sidewalks with their "friendly" robots.

"It's almost impossible to get hurt by it," said Martinson. "But, of course, it's designed not to crash into anything."

Starship has two pilot programs planned for the U.K. and the U.S. next year. The founders envision the robots delivering parcels, laundry, pizza and many other things.

Investors fund the year-old company, but the CEO declined to comment on specifics.

Do you think you dance well? Boston Dynamics robots beat you with their choreography

Robots Are Stealing Our Jobs