Coming Soon: A Simple Blood Test That Can Detect All Kinds of Cancer

By Gary Gately January 11, 2016
This story originally appeared on CNBC

Dr. Victor Velculescu envisions a day — not so far off — when screening for cancer will become as simple as a blood test during your annual physical.

Unique cancer mutations show up in microscopic fragments of DNA in a patient's blood, which can give physicians a telltale sign of the presence of the disease in almost all types of cancer mutations — within cells or floating freely in the bloodstream.

The "liquid biopsies," as the tests are known, have become something of a Holy Grail in cancer treatment among physicians, researchers and companies betting big on the technology. Liquid biopsies — unlike traditional biopsies involving invasive surgery — rely on an ordinary blood draw. Advances in sequencing the human genome, enabling researchers to detect genetic mutations of cancers, have made the tests possible.

"It is revolutionary," said Velculescu, the co-director of cancer biology and professor of oncology and pathology at the Johns Hopkins University Kimmel Cancer Center. "I think in the next, let's say, five years, it'll become part of an annual physical."

That could lead to early detection of cancers, said Velculescu, who, along with colleagues at Hopkins, has studied liquid biopsies in hundreds of patients with lung, breast, colon, pancreatic and ovarian cancers.

"Early detection has exciting possibilities because it allows us to imagine getting cancers at the time at which they could still be taken out surgically," Velculescu noted. "It allows us to think about using therapies that'll be more effective, because they'll be applied earlier on in the disease — with all sorts of improvements in the overall outcome, survival and morbidity or how patients do — just based on detecting the cancer earlier."

The liquid biopsies are already being used commercially on a limited basis, though mainly in patients with Stage 3 or Stage 4 cancers, to help determine how well treatment is working.

As recently as a few years ago, the liquid biopsies were rarely used except in research. Today, thousands of the tests are being used in clinical practices in the United States and abroad, including at the M.D. Anderson Cancer Center in Houston; the University of California, San Diego; the University of California, San Francisco; the Duke Cancer Institute and numerous other cancer centers.

And Silicon Valley venture firms like Sequoia Capital, New Enterprise Associates and Khosla Ventures have invested tens of millions of dollars in the technology. That's because the market potential is huge. 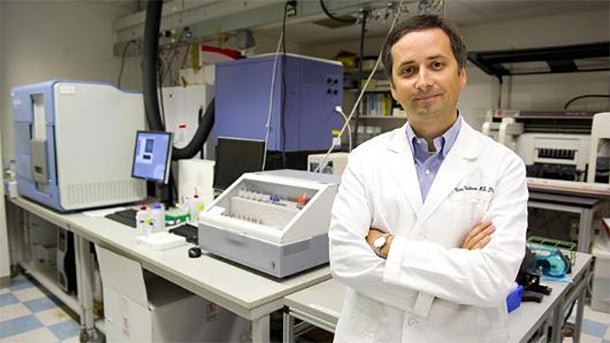 On Sunday, Illumina announced the formation of a new company, called GRAIL, which will focus on blood-based cancer screening. The company is majority owned by Illumina and funded by more than $100 million in Series A financing from Illumina and ARCH Venture Partners, with participating investments from Bezos Expeditions and Sutter Hill Ventures.

Besides Illumina, other public companies in this field include Genomic Health and Myriad Genetics. Private companies developing liquid biopsies include Guardant Health and Pathway Genomics.

Guardant is among the leaders in developing the liquid biopsy, and CEO and co-founder Helmy Eltoukhy said its test has been used in more than 20,000 patients in the U.S. and abroad. As Eltoukhy pointed out: "It's a much more game-changing paradigm than I think a lot of people realize."

Guardant, founded in 2012, has been supported by nearly $200 million from venture capitalists, including Sequoia Capital and Khosla Ventures.

But the liquid biopsy remains pricey — Guardant's costs $5,400 per test, with some health insurance plans picking up a portion of that — and the cost may still be prohibitive for many patients.

Including blood tests for the estimated 14.5 million cancer survivors in the United States, Eltoukhy projects the U.S. market potential for the liquid biopsy at more than $20 billion a year.

How long it takes to get results for the test depends on how comprehensive it is, Eltoukhy explained. Guardant's takes an average of 12 days, compared with nearly a month for traditional biopsies.

According to Samir Kaul, a founding general partner at Khosla Ventures, "It's not a cure, it's not a therapy, but it will improve and extend duration and quality of life of all the people who get diagnosed with a horrible disease."

Dr. David Hyman, an oncologist at Memorial Sloan Kettering Cancer Center in New York City, likens the genetic markers that cancers shed into the bloodstream to UPC bar-coding on products.

"The concept is, essentially, each genetic mutation is unique, and it kind of labels the DNA as having come from the cancer," Hyman said. "In that sense, you can kind of think of it as a bar code."

"There's no question that this technology has tremendous promise in identifying mutations of clinical relevance to patients with cancer and helping guide therapy," Hyman explained. "I think it will start to enter into the realm of routine clinical practice, in limited areas at first, where it's well studied and well proven."

Nanotechnology advances have helped move commercial development forward. At Cornell, researchers have created a new tool that sorts and collects DNA, one molecule at a time and pinpoints the molecules that have characteristics that cause cancer because of external or environmental factors that switch genes on and off.

For cancer patients undergoing treatment, liquid biopsies could spare them some of the painful, expensive and risky tissue tumor biopsies and reduce reliance on CT scans, which must be limited because of the danger posed by overexposure to radiation.

With patients for whom physicians cannot get a tissue biopsy — e.g. some lung cancer patients with tumors too dangerously close to arteries or the heart — the liquid biopsy could prove a safe and effective alternative that could help determine whether treatment is helping eradicate the cancer.

"We can actually do it without even looking at the tumor," Velculescu said. "We can just look at the blood."

However, experts caution that more studies are necessary to determine the accuracy of the test, precisely which cancers it can detect at what stages and whether it improves care or survival rates.

Early research on the liquid biopsy has focused heavily on patients with later-stage cancers who have undergone treatments, including chemotherapy, radiation, surgery, immunotherapy or drugs that target molecules involved in the growth, progression and spread of cancer. The tests can quickly assess the effectiveness of surgery or other treatment, while traditional biopsies and CT scans can still remain inconclusive as a result of scar tissue near the tumor site.

"You could actually follow how your tumor is growing or shrinking while you're on a certain therapy," Velculescu said. "And you could use that to determine whether the therapy's working or whether you should switch to another therapy."

"The results showed that in early-stage cancer, we still have some work to do," Velculescu said. "In those cases, repeating liquid biopsies may be needed."

The liquid biopsies also appear to work better in some cancers than others. The tests, for instance, appear to be less effective in detecting brain cancers, partly due to the blood-brain barrier, a natural defense system that regulates the passages of substances between blood and the brain.

Dr. Mark Roschewski, a staff clinician at the National Cancer Institute (NCI) in Bethesda, Maryland, predicts it'll take three to five years for the test to go mainstream in the detection and treatment of cancer.

"It's not quite ready for prime time, but it's moving in that direction," Roschewski said.

But he noted the liquid biopsy shows real promise: An NCI study published in April in "The Lancet Oncology" involving 126 patients with the most common form of lymphoma showed the test predicted recurrences more than three months before they turned up in CT scans.

The study also revealed which of the patients would likely respond well to therapy and which would respond poorly. That knowledge can help doctors in deciding whether to pursue a different treatment course.

Guardant's Eltoukhy is optimistic and said the liquid biopsy has come a long way even in the past year and a half. "When we launched the tests commercially in June of 2014, very few people, including oncologists, knew what a liquid biopsy was."

Fast-forwarding to today, doctors and medical researchers are excited by the prospect that liquid biopsies would be a way to help people already fighting the disease. Doctors can pick a drug according to the specific DNA mutation driving cancer forward. Tests to identify the mutation are sometimes done on tissue taken from a tumor, but a noninvasive blood test would be appropriate in many cases.