For Candy Companies, Easter Is the Sweetest Day of the Year

By Mark Fahey March 24, 2016
This story originally appeared on CNBC

Halloween may have trick-or-treating and Valentine's Day may be synonymous with boxes of chocolates, but Easter is the day that leaves candy companies salivating.

In the week before Easter last year, Americans bought $823 million in creme-filled eggs, chocolate rabbits and colored marshmallow Peeps, according to Nielsen data. That narrowly beats out Halloween as the most lucrative week of the year for candy retailers.

Looking at weight alone, Americans purchased 146 million pounds of candy in the week before Easter. That's nearly half a pound of candy for every man, woman and child in the country, or the weight of more than 11,000 African bush elephants.

Costumed kids seem to be consuming more candy by the pound, but their neighbors are handing out some of the cheapest candy -- several dollars per pound cheaper than the fancy chocolates for significant others on Valentine's Day. As for Easter, the red line in the chart seems to show retailers selling leftovers cheap the week after the holiday. 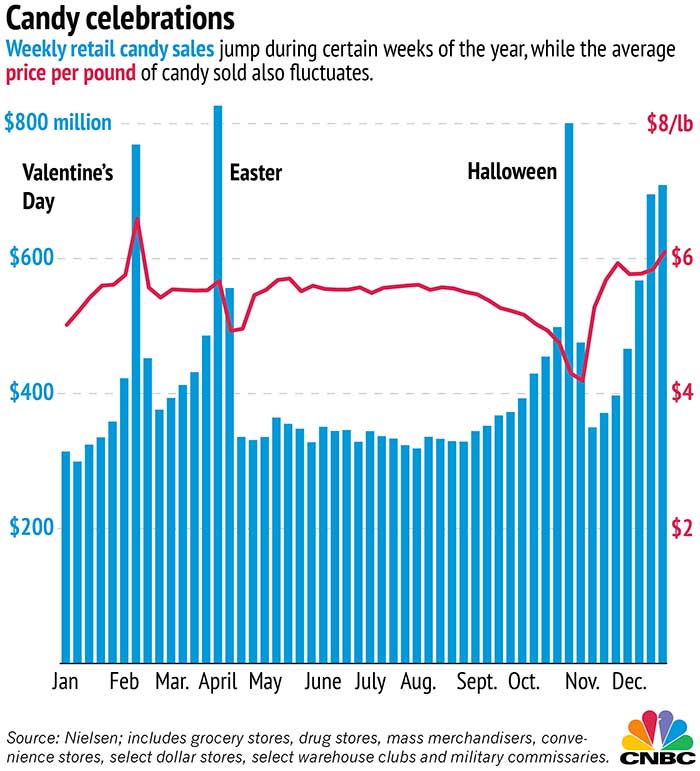 "In the weeks around Halloween consumers are buying in bulk with a volume mentality for the trick-or-treaters," said Carman Allison, vice president of consumer insights at Nielsen. "Easter and Valentine's Day are more gift based purchases where premium packaging plays a role in what consumers purchase for their loved ones and how much they are willing to spend."

Holidays are huge money makers for candy companies, but Americans apparently need no excuse to eat candy all year round. In a normal week, Americans still pay about $300 million for 76 million pounds of sweets.

According to Nielsen's point-of-sale data, about 17 percent of the candy sold each year is "seasonal" branded to be consumed during a specific holiday. Easter, surprisingly, makes up more than a third of that seasonal candy, according to the data.

Halloween is still the biggest holiday from the manufacturer's side, said Chris Gindlesperger, vice president of public affairs and communications at the National Confectioner's Association, citing the trade group's data. But the sales figures can change each year depending on retail factors, the night that a holiday falls in a given year or even what the weather is like around holiday.

The concentration of the sales week could also give Easter a higher peak -- Halloween candy sales tend to be more spread out and piggyback onto back-to-school sales, said Allison.

Making a little over a billion dollars a year in just seasonal Easter candy isn't too shabby, but it's small compared to the approximately $45 million pulled in every single day for nonseasonal candies such as chocolate candy bars in convenience stores.

But -- and there's no way to sugar-coat it -- Easter's candy throne may be crumbling. Annual sales growth for the holiday's seasonal offerings was slowing compared with other categories over the last four years. 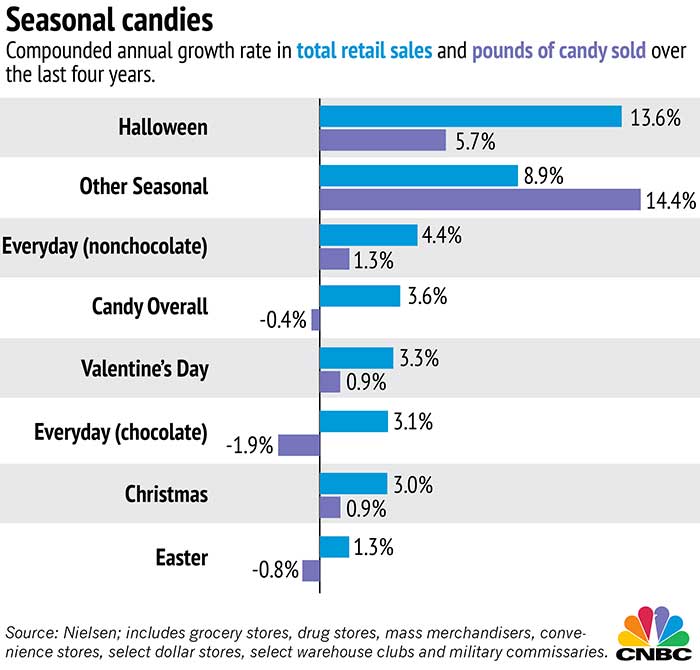 That may explain why Just Born, a company known for its iconic Easter candy, has been trying to expand Peeps sales beyond Easter. The varieties of Peeps available have exploded in recent years -- pumpkin spice Peeps in October and hot cocoa and peppermint Peeps around Christmas.

The company has been making a concerted effort to expand to other seasons over the past few years, but 70 percent of sales still come from Easter, according to a Just Born spokesman. That's the same percentage as 2014, when the company launched its first year-round Peeps product.

Easter is the king of candy holidays, and Peeps are arguably the king of Easter candies (they've been the No. 1 non-chocolate candy for the last 20 years). The company is pushing Peeps for the summer, Valentine's Day and all the rest of the year, and they're not the only one. Everyday brands are also coming up with new products to capture shares of those holidays -- think Reese's peanut butter eggs and Swedish Fish jelly beans.

"Consumers have an affinity and loyalty to certain brands and manufacturers who can convert that loyalty to a seasonal sale or unique format will win," said Allison. "To take a seasonal product and make it every day is a bit more challenging since you need to change the consumer perception of not only what they brand stands for but also the perception of freshness."

Despite the earlier-than-normal date, the Confectioner's Association has high hopes for this Easter. The group is projecting that it will bring in $2.4 billion, up about 1.4 percent from last year. Halloween could catch up, based on the Nielsen data, but it may be too early to tell.