By Fida Chaaban April 11, 2016
Opinions expressed by Entrepreneur contributors are their own.
You're reading Entrepreneur Middle East, an international franchise of Entrepreneur Media.

"We didn’t know the first thing about running a restaurant,” says Hisham Samawi, when recalling his and his brother Ashraf Samawi’s journey starting up the Middle East’s first Clinton Street Bakery Company in Dubai. “It looks really simple when you see a restaurant working, but one little thing goes wrong and you wouldn’t believe how much it impacts everything. Little problems get compounded, even if it’s something like our servers forgetting to ring in an order- it all creates a domino effect, it can lead to chaos!”

And chaos it was, for a little while in the beginning, admits the entrepreneur. Samawi remembers a particular instance when the printer in the restaurant’s kitchen –which let chefs know of their patrons’ orders- stopped working. “It was like a bomb had exploded,” he says. “100 tables in the restaurant were about to not get their food! My brother was being the barista making coffee, and I was waiting tables. We kind of looked at each other, and at that point, we just wanted to shut the doors, get in our cars, and leave!” 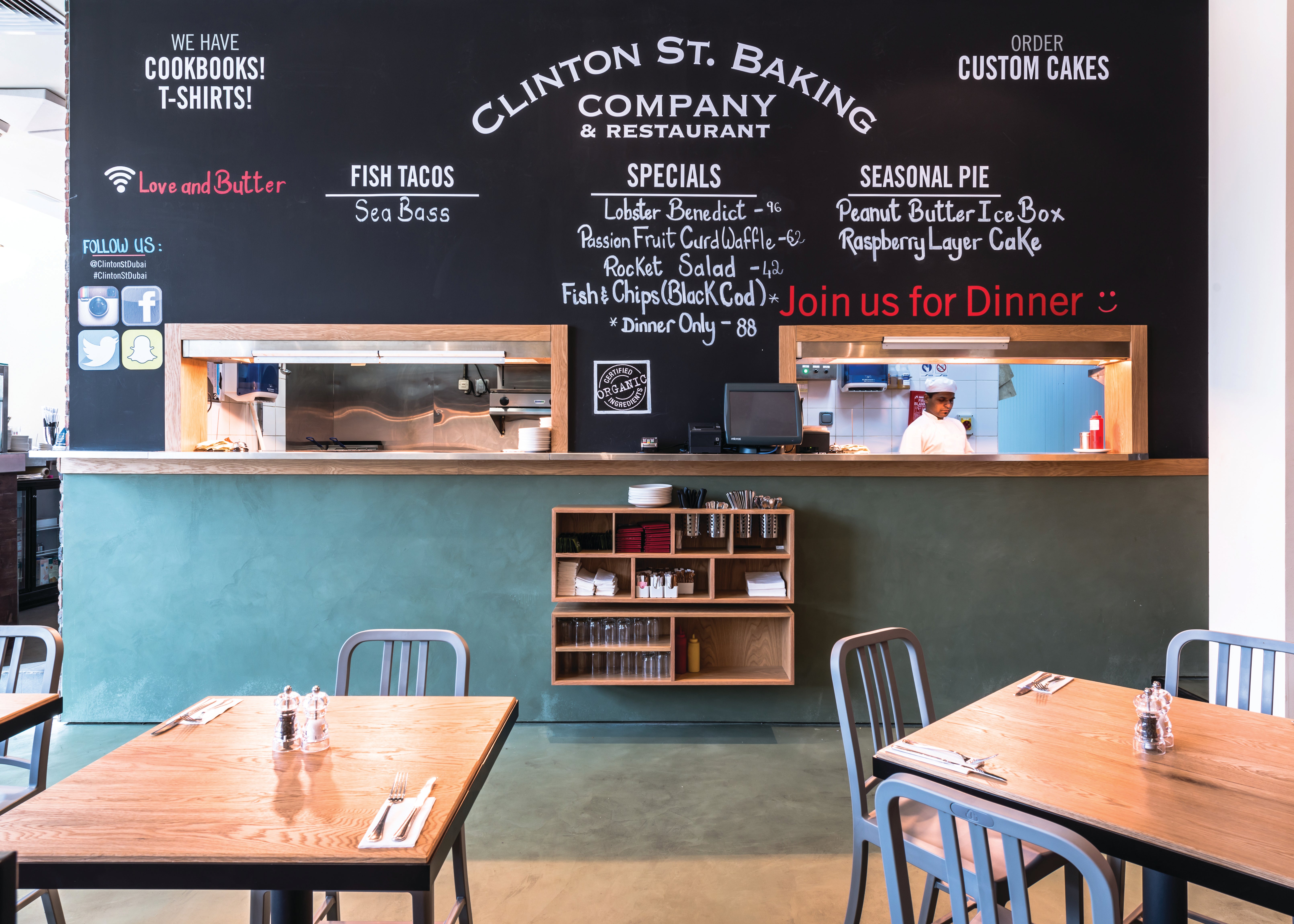 Clinton Street Baking Company in Dubai, UAE
In the end, they were able to get the situation under control, but not without some valuable lessons on how to liaise with waiting hungry clients. During what Samawi refers to as their “amateur hour,” they kept the outlet in people’s good graces by doing table courtesy visits, and offering the waiting customers complimentary meals. Samawi laughs about these types of situations in hindsight, but those first few months of operations came with a steep learning curve for the brothers in matters of orchestrating staff and service flow, wastage and how it eats into what could potentially be profits, and operational standard development and subsequent implementation.

Today, the co-founder is used to being confused for a waiter at his Dubai-based F&B enterprise, mostly because he often actually jumps in and shuttles meals- something that he has done ever since the enterprise opened. He’s also used to being confused for the outlet’s delivery driver and busboy, because, again, he’s performed those functions at his business too. Dubai’s first Clinton Street officially opened at Burj Views two years ago, and the co-founders recently signed on to launch the second outlet at City Walk- a 3,400 sq. ft. space that is scheduled to open in the fall. Being only the third city to have the original New York City concept, Samawi says that they wanted the outlet to “have a neighborhood feel,” hence their choice to opt for opening outside of a mall or hotel space.

The brand was founded in 2001 by husband and wife team Neil Kleinberg and DeDe Lahman, and Samawi warmed to its homegrown dining experience by being a member of their frequent clientele. “I used to live in New York, right around the corner from the original Clinton Street. It was my neighborhood restaurant, so I saw it go from an obscure hole-in-the-wall to a New York institution with twohour lineups that I actually waited in to eat at.”

Samawi, a graduate of Columbia Business School, had already made a name for himself in the art sector under MENA’s Ayyam Gallery. His sector trajectory shift meant a whole new education on what works and what doesn’t work. “I never really intended to get into the F&B industry. I was doing Ayyam Gallery when I came to Dubai. My family was living in Jordan at the time, and I first came here as an entrepreneur looking to find business opportunities since I’d heard so much was happening here. I didn’t know exactly what I was looking for; I thought when I saw the right business opportunity it would become obvious to me.” 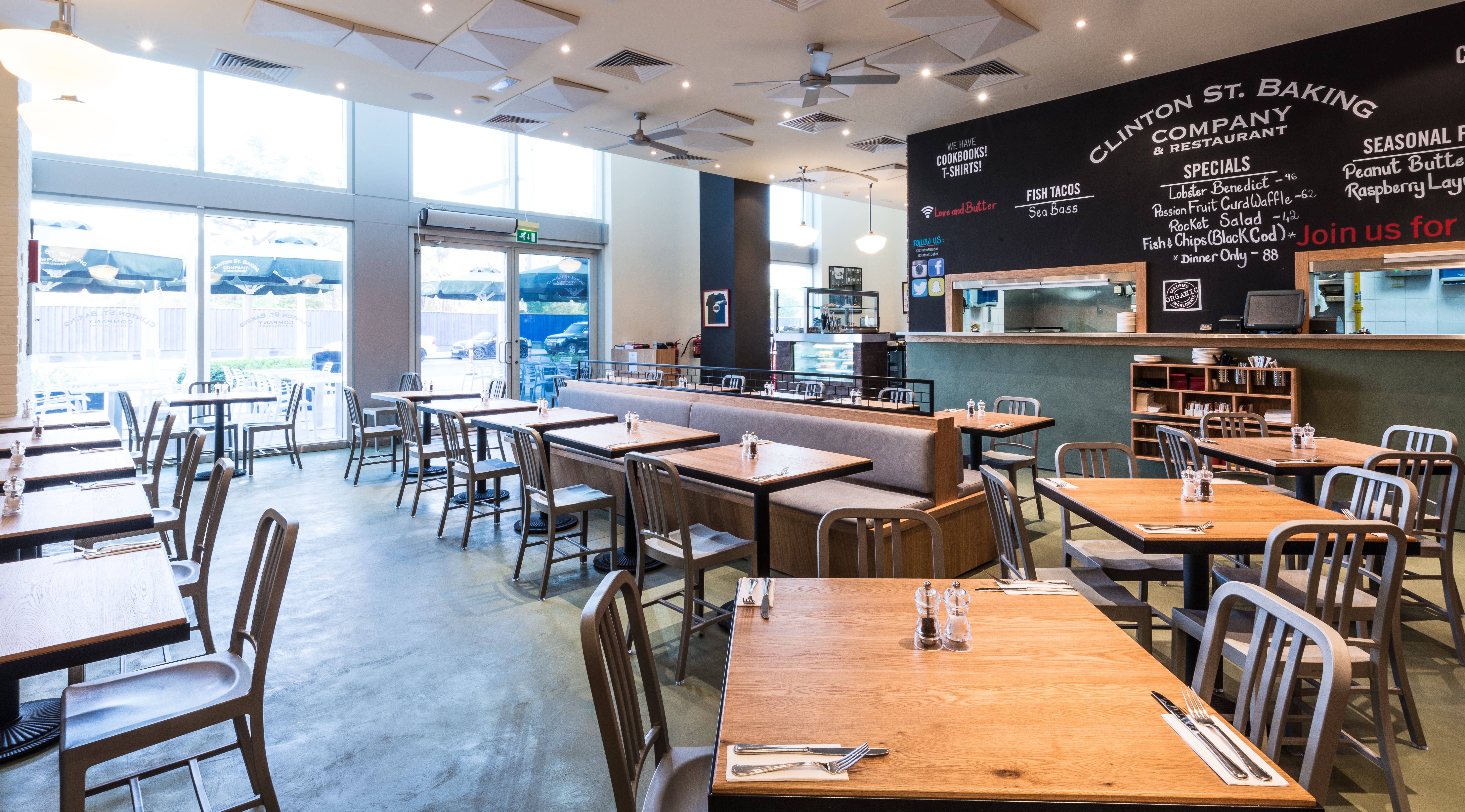 It did become obvious, but it was a combination of factors that led to the execution and launch of Clinton Street. The first, says Samawi, revolved around the idea that the mid-market segment was underserviced, specifically in the breakfast category: “I always felt that Dubai was missing that great breakfast experience that I really liked in New York. People always complained that there was nowhere good to have breakfast.” The second factor that contributed to his interest in launching the business was that he was approached for investment in someone else’s F&B venture. “Around that time, someone approached me for investment in their restaurant. I never really liked to invest in other people’s projects, because I prefer to have more control and be more active in the investment.”

That invitation to invest got Samawi thinking about his own entrepreneurial interests, and the opportunity to bring Clinton Street to the Middle East. How did he manage to land the licensing rights? Initially, what clinched the deal with the owners -who were somewhat reluctant to expand borne from concerns that the brand itself wouldn’t stay true to its ethos- was “the fact that I loved Clinton Street and knew the brand inside and out. They cared about going with a solid foundation, rather than me just bringing the brand to the Middle East, opening up 50 locations, and focusing only on the money.”

Once the deal was cemented, the Samawi brothers then learned that there was no brand manual that existed per se other than a 20-page brief, nor was there the usual guidelines in terms of operational standards and processes that one expects from a franchise agreement. “We aren’t really a franchise in the standard sense, as what we worked with was having our chefs trained onsite in New York, and that was pretty much it. Other than the menu, we basically had to develop all of this material from scratch.

It’s more of a licensee agreement rather than a franchised outlet.” The 2,400 sq. ft. Burj Views outlet became an ongoing experiment of sorts with the brothers constantly working on streamlining processes, testing attempts to slash wastage and figuring out how to curb inefficiencies, and most importantly, stemming the flood of costs that eat into profit margins. “I think, as a business owner, it’s about how you run the business. It’s like, the food is good, the service is good, then generally, the revenue should be there, but then, how does that revenue become profit? Assuming you get 100 dirhams from a customer, you’ve got to figure out how to pay your suppliers, your staff etc. There’s so many places where that 100 dirhams goes to. By the time you’re through with that, you might not have any money left. That knowledge base has almost taken us two years to acquire. It’s almost like you don’t know what you don’t know, so you don’t know what to ask.” 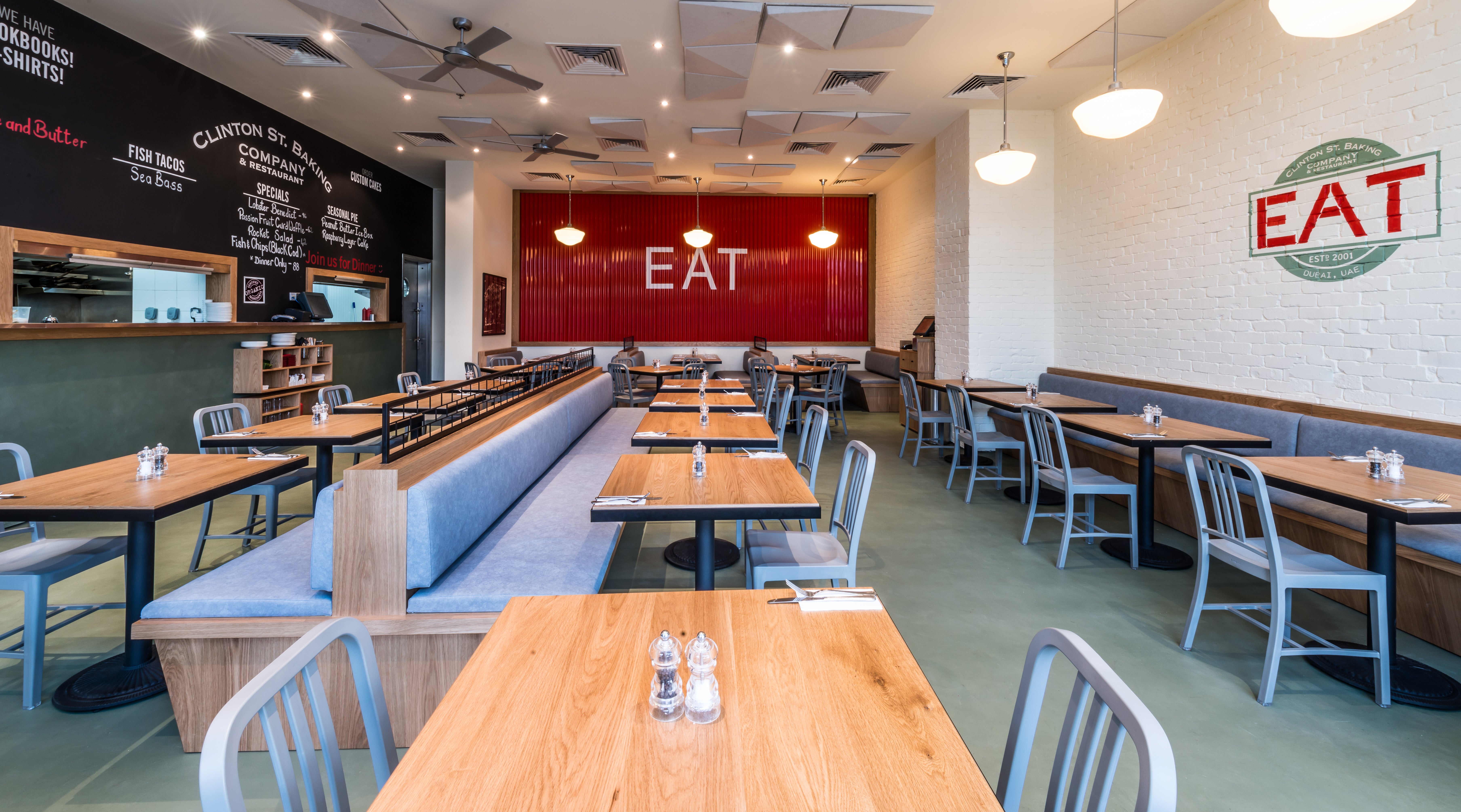 You also don’t know what will end up being cost effective and what won’t, until you execute a trial period and then do the calculations. Clinton Street’s delivery service option ended up being much more worthwhile for the business after outsourcing- which seemed counterintuitive until the numbers spoke for themselves. An in-house fleet of four delivery drivers proved to be a huge cost when Samawi factored in things like insurance, salaries, fuel charges, and the rest.

“Our overhead was approximately 20,000 dirhams per month, and I did the math and found it was costing us 35 dirhams per trip. I knew there had to be a better way- I did some research and found a company called Any Order Delivery at a cost of 10 dirhams per trip. It’s also an added benefit because now we can do an unlimited amount of deliveries, and this is without having staff onsite waiting around for delivery orders during slower times. It was a seamless transition, and it’s almost a quarter million dirhams that we just saved!” As passionate as the founder is about his venture, he admits that at some point he needed a break after six straight months of 16-hour days. He had a full week of being disconnected digitally during his vacation to Burning Man in the U.S., and it gave him perspective. “Initially getting back after that week, I felt that I was out of the loop- a week is a long time in any business. Think about a week of emails, messages, anything, and then think about what can happen at your business in a week out of your control.” Did he escape the business completely during his time off? “When you actually take a step back, it makes you realize how over-controlling and over-obsessive we can be about every little thing. It will go on without you, if you’ve built it right.”