Samsung Mobile CEO: Note 7 'Was Like Heaven to Hell'

In an interview with PCMag, Samsung's mobile CEO discusses regaining consumer trust and where he wants to go next (foldable phones?).

By Sascha Segan March 30, 2017
This story originally appeared on PCMag

DJ Koh's tenure as CEO of Samsung Mobile started out great. And then it all went up in flames.

"It was like heaven to hell, and I didn't want to stay in hell too long," Koh said of the critical weeks around last fall's Galaxy Note 7 recall.

Koh became Samsung Mobile's CEO in December 2015, right before the Samsung Galaxy S7 and S7 Edge got stellar reviews and smashing sales. He didn't come out of nowhere: like the previous CEO, JK Shin, he'd risen up from Samsung Mobile's R&D division.

In weeks of daily 8 a.m. meetings about the crisis, Koh said he realized that customer product safety, accountability and transparency hadn't gotten the same level of priority within Samsung Mobile as "meaningful innovation," leading to the new eight-point battery safety check and the new battery advisory group.

"Meaningful innovation should keep going, but on top of it, we will keep as a top priority customer product safety," he said. "It will take time, but I strongly believe I can bring our customers' trust back."

Koh puts a friendlier and more creative-intellectual face on Samsung's mobile division than Shin, who was in charge from 2011 to 2015 and boosted Samsung smartphones into the number one position in the U.S. by being hard-charging, combative and intense. I wouldn't necessarily have called him warm, but he made it clear that Samsung would be cutting edge and everywhere.

Koh, on the other hand, is avuncular and friendly. He joked about selling us used cars, was willing to speculate about some of Samsung's weaknesses, and did his best to charm a table full of journalists. He wanted to make it clear that during his tenure, Samsung will be a company that feels open.

"We are doing this communication on an ongoing basis with our customers," said YH Lee, Samsung's executive VP of global marketing for mobile. "We are sharing why it happened, what happened, and why it won't happen again.

"We are sharing all of the information with our customers, engaging them and listening to what they want," she continued. "I think we can regain a little bit of trust, and we're seeing our customers as generous enough to say, 'I believe in Samsung, and a one-time mistake is excusable.'"

Speeding up with software

Samsung hardware generally gets great reviews, but it isn't known for great software. Turning that reputation around may have been some of what got Koh his current job, as he led the development of Samsung's successful Samsung Pay and Samsung Knox services.

"Maybe two years ago ... we didn't have a clear understanding of the ecosystem, software, service and solutions," Koh said. "We are getting familiar with it. The Galaxy S8 and S8+ is the right device to communicate ... that now something is changing regarding service and solutions." 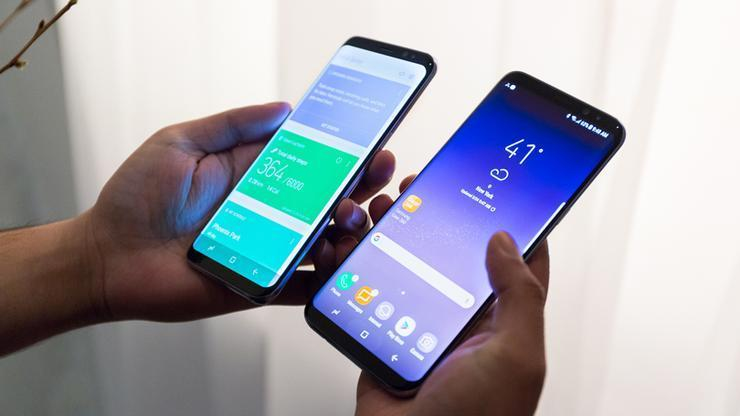 "[By 2020] AI will be very, very deeply embedded in our device. It will be one of the strong user selling points, and a real personal assistant," Koh said.

Samsung Connect, meanwhile, is hopefully the pivot on which Samsung will join together all of its consumer electronics devices. I mentioned that I'd heard that same convergence vision from JK Shin back in 2014, which led to the "we're getting better" comment above.

As for Android updates, Koh made a distinction between security and feature updates. Samsung, partners and carriers all agree that Android security updates must come quickly, although carriers have the final say, he said. But Samsung is committed to a two- to three-month "settling-down period" before rolling out major Android feature updates.

"Third-party developers need time [to adapt to new OSes.] If we upgrade too quickly, that will make a certain impact on our end customer," he said.

As the former head of R&D for Samsung Mobile, Koh was willing to speculate about what we'd see from the company in the future.

Samsung's already a leader in mobile VR, but augmented reality -- said to be Apple's next big play -- is also on Koh's to-do list. "That will be the next big step. We are under preparation to provide it as a commercial product, but we may need more time," he said.

The Biggest Tech Product Flops of the 2010s

Get a Refurbished Samsung Chromebook for $100