Building a Car or Fixing a House? These YouTubers Can Help.

For DIYers who like to make their own furniture, one of the YouTube superstars of the so-called maker video scene is a 50-year-old master craftsman named Jimmy Diresta.

By Jon Kalish July 24, 2017
This story originally appeared on PCMag

Not long ago, I found a YouTube video that provided step-by-step instructions on how to fix the lid on a kitchen trash can that's supposed to open when you step on the pedal. Whether you need to learn how to play a bass or fillet a bass, chances are there's at least one video on YouTube that will provide a detailed how-to for the task at hand.

It's reminiscent of the podcast explosion. If you search for a podcast about heavy metal bands who only sing about fly fishing, chances are you'll find one.

For DIYers who like to make their own furniture, one of the YouTube superstars of the so-called maker video scene is a 50-year-old master craftsman named Jimmy Diresta. The guy can fabricate anything out of wood, steel and synthetic materials. Diresta has a million-plus YouTube subscribers who watch him work magic in a 5,000-square-foot Catskills Mountain work space. His toolset includes everything from rusted, century-old lathes to state-of-the-art CNC machines such as routers and plasma cutters. 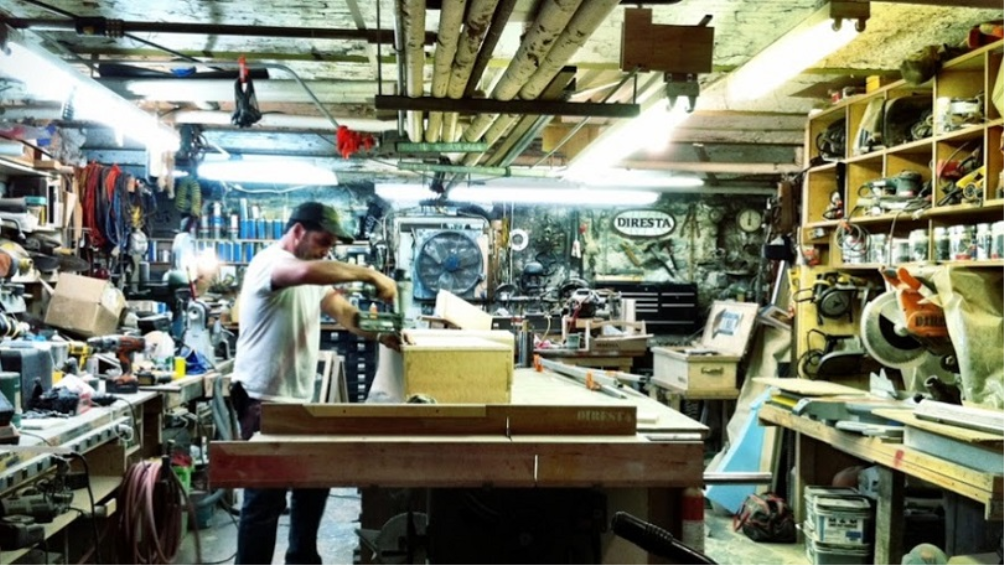 "Everything I've ever done for a living was making something," said Diresta, who started making and selling signs to other kids when he was in elementary school.

As an adult, Diresta spent 18 years building prototypes for the toy industry Then he started doing TV shows for Fox and the Discovery Channel. But he soon grew frustrated bending to the will and whim of his producers and clueless executives. So he turned to YouTube and hasn't looked back. Diresta estimates he's done more than 400 videos at this point, including exclusive content for Make magazine (the journal of the maker movement), the industrial design website Core77 and Rockler, which sells woodworking tools.

Diresta says the key to a successful a maker video channel is producing content that your audience will want to share. Twenty-five of his videos, including videos about a sword that is concealed in a cane (below) and a hollow log treasure chest, have had more than a million views on YouTube. A few, including one in which he attached a multi-tool to a bowie knife, have have been viewed more than 5 million times.

Diresta's fans come from all over the world to visit him in New York. And some who don't make the trek send him handmade stuff with the Diresta logo stenciled on it, a hat tip to his YouTube videos, which conclude with Diresta spray painting his surname on his projects with a stencil. In another nod to YouTube tradition, Diresta unboxes gifts from his fans on camera.

The man receives a continuing stream of emails from other makers who initially express admiration for his video handiwork and then write back to alert him to their first videos. "My style has been stolen a million times to Sunday," he says, "but I don't mind. I like it."

One of Diresta's admirers, who is starting to make a name for himself on YouTube, is Gardner Waldeier, a 34-year-old woodworker, auto mechanic and gourmet chef in Waterford, Maine. Waldeier is known as Bus Huxley on YouTube, a name he says just came to him. His videos are often made with the help of both a 60-year-old Ford tractor and a brand-new iMac.

Waldeier has been cutting down trees on his land, milling them nearby, and building a new house with the lumber. There are 21 episodes so far in his A House Built from Trees series, with no end in sight. But he doesn't limit himself to building in his videos. His eclectic channel offers screen time to baby raccoons, recipes for tacos and pickled jalapenos and such wacky endeavors as using a chainsaw to propel himself across a frozen lake.

When he started making videos, Waldeier used an iPhone with a cracked screen someone gave him and a low-resolution garden cam that allows you to record video one frame at a time by setting the interval between frames.

Waldeier's videos do not yet have the reach of similar videos from Diresta. His four-minute video on fixing the brakes on a Toyota Corolla garnered fewer than 100 views. But his tutorial on changing a gas tank on a 1996 Ford pick-up truck had 12,000+ views. Waldeier's most widely seen video is a step-by-step demonstration of how to make gnocchi, which accrued some 21,000 views.

"I get many comments from people who say, 'I'm trying this [recipe] tonight,' and then the next day they write and say, 'This is a great recipe. It worked just as the video said it would.' That is hugely satisfying to me," Waldeier tells PCMag.

Diresta says he gets feedback from his subscribers every day. "Sometimes it's someone who never thought to work with metal, but because I've been doing a lot of metal projects, they say, 'I finally got my first welder. I never, ever was interested in welding but I see the combination of wood and metal you do, so now I'm going to try and do that.'"

Diresta says his videos appeal to people who are not makers.

"I always strive to make sure my videos include a transformation. If it shows a transformation, I think people become entertained and educated," he said. "They say, 'I didn't know that pile of wood could become that beautiful piece of furniture.' Or, 'I never understood how a giant chunk of metal gets machined and turned into this other shape.'" 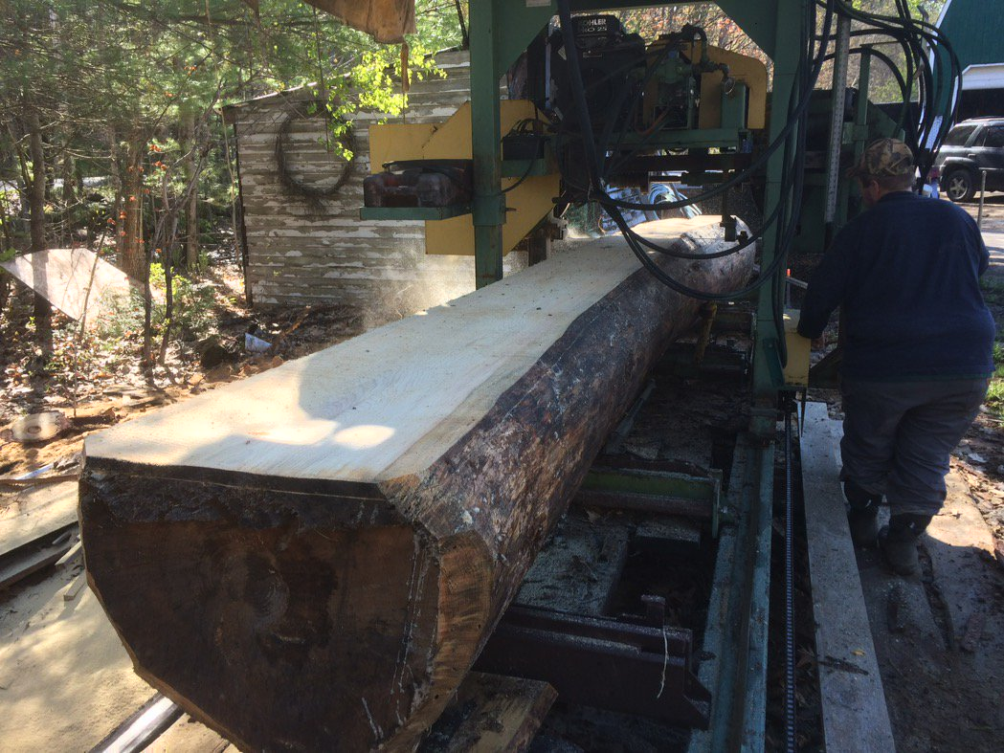 Pushing gadgets to the limit

The makers on YouTube couldn't do what they do without a GoPro or other small so-called action cameras.

"You can plop them and drop them everywhere," says Diresta, who owns a bunch of GoPros and swaps them out when the batteries drain. "GoPros just open up a whole new world of looking at things from underneath, inside, outside."

Waldeier has positioned his GoPro in some strange places: on shears he used to prune an apple tree (below), on the steering wheel of a cross-country ski trail groomer, in a pot into which he was ricing potatoes, on the scoop of an excavator he used to pull tree stumps out of the ground. It's not surprising, then, that his GoPro has been subjected to more than a fair share of abuse.

"I've dropped it from a 90-foot pine tree. I've run it over with my tractor. I've hit it with a hockey stick," he says. "It's incredible. It's cracked but it's holding up."

Not all Waldeier's creative attempts to provide his YouTube followers with a birds-eye view pan out. Footage he recorded with a GoPro submerged in sap wasn't used in his video about making maple syrup.

These maker videos often violate some of the cardinal rules in filmmaking. Jump cuts abound, and what might be deemed as hokey attempts at magical realism also pass muster. During editing, Waldeier can take a tire off a car in an instant with the magic of his cursor, while vegetables seem to dance across a cutting board.

Most of the time, the action in these step-by-step video are sped up. The first task in a project may be shown in real time but then the footage zooms by to give the viewer a sense of the project's entirety. But there's also a time for slowing things down.

"If I'm holding up something that's important, I'll literally grab those three seconds and slow it down to... six seconds so that people can absorb it," says Diresta. "I slow things down so people can do a frame grab on it and look at it and see what it is. So, I'll show a bottle that I'm using only for an instant of a second, knowing that someone will just click through the frame rate and then, 'Oh, I see it. Okay, that's edge coat for leather. Let me write that down and go find that.'"

The technique of speeding up or slowing down footage is as old as motion pictures themselves, but Waldeier says slow motion can have a powerful effect.

"You can see the ax going into the piece of wood and see the wood splitting apart," observes Waldeier. "And the same with sawdust shooting out. You see things happening [in slow motion] that you're not aware of in regular life. It's a whole unseen world."

Two other YouTube channels worth checking out are Tim Sway, a Connecticut-based maker who specializes in upcycling discarded objects into furniture, and a Swedish immigrant in Oregon who uses the nom de YouTube Darbin Orvar. Her maker career started in second grade in Sweden, where she was required to study wood-working and sewing in school. Among her YouTube projects are a concrete vase, a Bluetooth speaker, an upholstered headboard for a bed and a camera bag.

YouTube will become an online store for a week

How to Create Ecommerce Navigation That Increases Sales

Testamóvil, a government initiative to facilitate the processing of wills in Mexico City