At Chief, the Club for Female Executives, High-Powered Women Aim to Break the Glass Ceiling -- For Good

Take a peak inside the network's TriBeCa clubhouse, where female execs from HBO, Amazon and Instagram come together.
Next Article Add to Queue

The statistics are familiar and disheartening: Women in business hold less than 25 percent of all executive positions and less than 5 percent of CEO titles. For the women who do climb the corporate ladder, it can be lonely at the top -- but a group called Chief is out to change that.

The New York–based private network and club connects high-ranking women across industries, with the goal of fostering community and elevating more women into leadership roles. Chief launched in January with $3 million in funding and 200 founding members from such organizations as HBO, Amazon, Walmart and Instagram. (The waitlist currently exceeds 4,000.) Its flagship offering, the Core program, splits members into groups of eight to 10 for monthly meetings to discuss their experiences in the workforce, and the Salon Series, held at Chief’s Tribeca Clubhouse, offers everything from workshops on getting a board seat to monthly poker nights.

Tell the old boys’ club to move over.

Related: Allbirds' San Francisco HQ Celebrates the Past But Looks to the Future

“There’s a lot going on in my life, and in my Core session last week, Tina Wells, CEO of Buzz Marketing Group, referenced a quote that helped me: ‘Just focus on doing the next right thing,’ instead of being overwhelmed by the big picture.”

“The group sessions leave you feeling heard, acknowledged, and valued. That can be rare, despite one’s success. It’s the idea that, yes, your skill set matters, but the relationships you build are what power companies forward.”

“Whoopi Goldberg spoke at our founding members’ party and talked about how when women support other women, change really happens. If we’re constantly competing, we’ll never get the support we need in the workforce -- like nursing rooms and good parental-leave policies. I’m fortunate to have a nook at my company where I can sit and pump breast milk for my baby, but so many women don’t. The speech made me angry -- and more motivated to grow a company that can drive change.”

“Studies show that women who have a female-dominated inner circle are more likely to attain leadership positions. One of the most rewarding things has been watching spectacular women in similar roles at similar companies -- who we assumed knew one another -- connect for the first time. It’s establishing an intentional network of women sitting around that boardroom, creating lines of succession.”

“A lot of people in my personal life aren’t necessarily at the same stage in their careers, so as far as people with similar leadership experiences, I don’t really have anybody to talk to. Now I’m connected with people who are facing very similar challenges at work, managing large teams, figuring out their next step, getting a promotion. I have a group of trusted advisers.”

“I recently attended a breakfast at Chief on unconscious bias. It’s something most of us know exists, but we see it happen and then live with it as the status quo -- we can be unconsciously insensitive. Going forward, I’m being more mindful, trying to pause a bit before I speak and put myself in other people’s shoes.”

“I’m very involved with diversity and inclusion within Google, and it’s also important to me outside work, figuring out how we can get more women into leadership positions across industries. It’s about turning connections into deeper discussions: What insight can I offer that may help someone, and what perspective can I gain from these other strong leaders?” 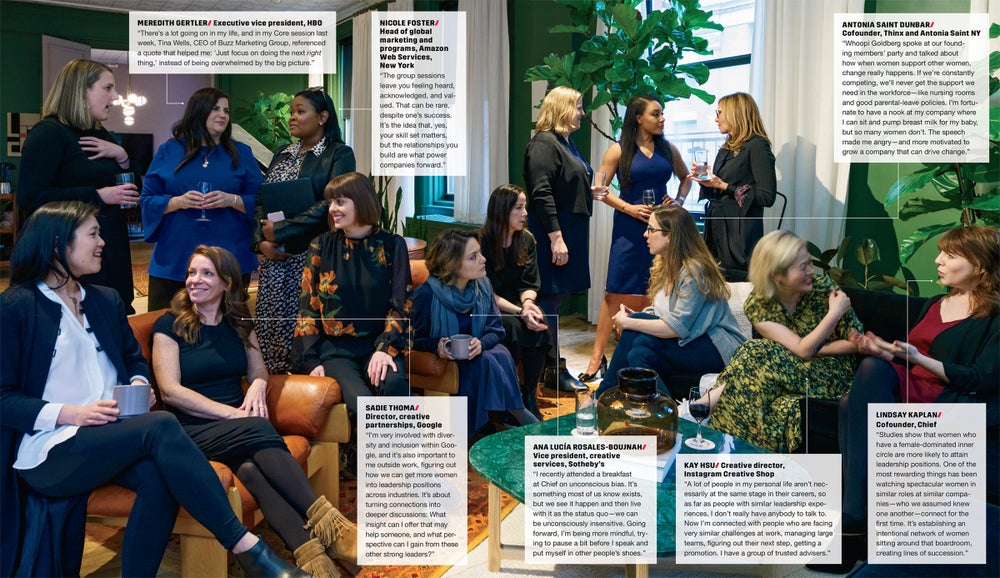 How Vital Proteins Brings Its Company Culture to the Home Office