Sanitisers Being Sold at Prices Higher Than Mandated by the Govt

Earlier this month, the government capped price of hand sanitizer at INR 100 per 200 ml bottle after reports of sellers overcharging them surfaced. But, not much seem to have changed since.

As many as 74 per cent of the 7,602 respondents to a survey conducted by community platform LocalCircles reported to have bought hand sanitisers at a price higher than government mandated rate in the last seven days. Of these, about 64 per cent purchased offline through a retail store or chemist, while the rest 10 per cent ordered via e-commerce apps. 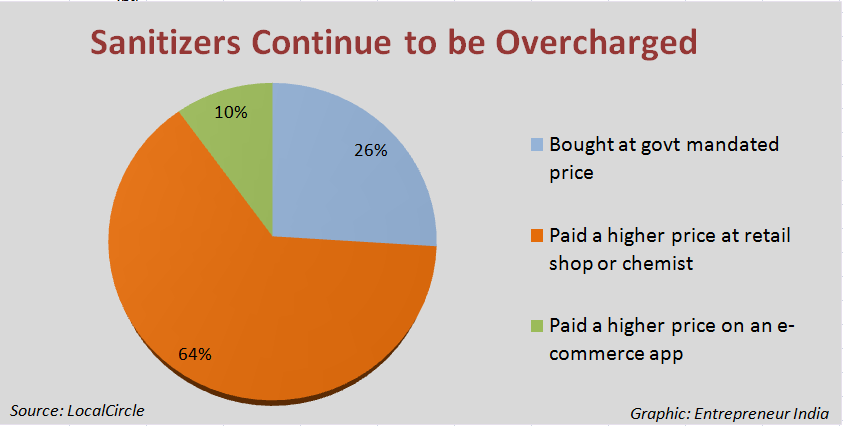 Hand sanitiser companies have seen up to 10-fold surge in demand since the coronavirus situation in India has escalated, as per the survey.

In public interest, some fast-moving consumer goods (FMCG) companies, such as Hindustan Unilever Limited (HUL), Reckitt Benckiser, ITC, Godrej Consumer, Himalaya etc. have reduced the prices of sanitisers and soaps by up to 25 per cent. Many also reported to ramp up production of these items on a priority basis to meet the increasing demand.

Even then, hand sanitisers remain out of reach for majority, as per LocalCircle survey.

Half the respondents said they haven’t been able to buy sanitisers at all in the last seven days. Even where the products were available, their legitimacy remained a concern as about 26 per cent had to buy sanitisers of unknown brands because known brand items were out of stock. 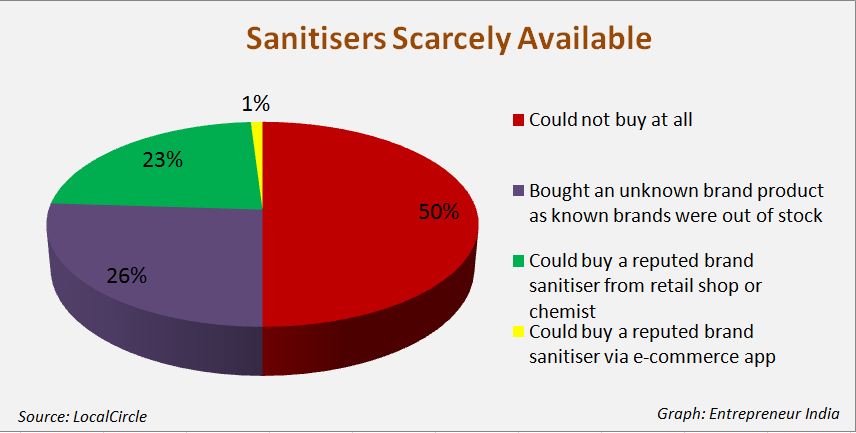 Only 24 per cent have been able to buy sanitizers of known, reputed brands. Availability via e-commerce apps remained scarce as only 1 per cent reported to buy known products through this channel.

Considering the vital role of hand sanitisers and masks in preventing coronavirus from spreading, the government has put the two items under ‘essential commodities’ category. This move is aimed at solving shortage of these items along with ensuring fair pricing. However, neither of the two issues has been completely solved, as the survey suggests.