This Entrepreneur Has COVID-19. Here's How He's Leading His Company

Eric Yaverbaum is in bed, but he can still offer three things to his team: transparency, optimism, and reality.

In late March, Eric Yaverbaum was out for a run when his body shut down. “It just hit me,” he says. “My breathing got very labored. I got a cough, extreme fatigue, body aches like I’d never felt in my life.” He went to the hospital, where a test confirmed his condition: He had COVID-19. Doctors sent him home to quarantine himself.

Yaverbaum is the chairman of Ericho Communications in New York City, and he now faced a challenging question: How does he lead his company while fighting a terrifying illness? It’s a question many entrepreneurs will likely face in the coming months, but Yaverbaum was more prepared than most. His expertise is in crisis communications.

In difficult moments like this, Yaverbaum believes that leaders need to step up with transparency, open communication, and a deep trust in their team. As he recovers from COVID-19, I spoke to him about how he's managed his company during his illness, and the good that can come out of all this upheaval. 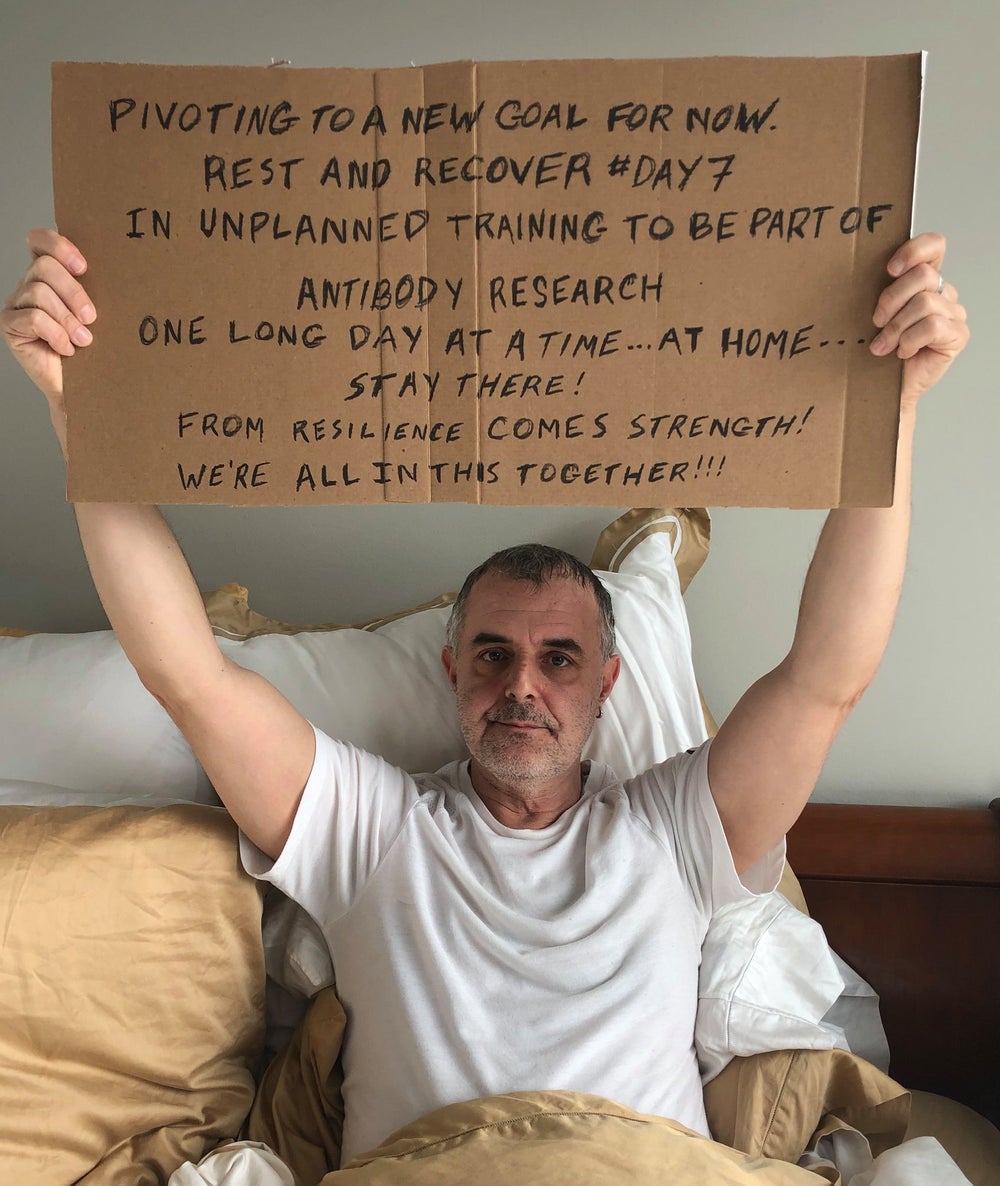 Where are you right now?

I'm in the same bed that I have been in for the last 11 days. I go from the bed to the bathroom, and it's not that far from the bathroom. That's what I do every day.

Well I have to say, you sound good.

Thanks. You don’t see the way I look.

What has the last 11 days been like for you?

I had a very difficult time breathing in the evenings. I literally gasped for air. That has gotten considerably better. I have extreme body aches. I have no sense of taste. I have no sense of smell.  It's very, very bizarre. You can literally feel it moving around in your body. It goes from one body part to the other. Sometimes it's in my lower body. Sometimes it's my upper body. The aches—even if you've gotten the flu full-out, it makes those aches look like junior varsity. You can feel this when it's in your lungs, which has been scary.

Your sickness could have had a large impact on your company. How did you decide what to do, once you were diagnosed?

I have employees on both coasts. I communicated immediately with transparency, and I let my entire company know exactly how I felt. What my company knows about me personally in the last 11 days is significantly more than I ever felt I needed to talk about. I communicated with them—with everybody that works for me—with all the tools that I had, and I did it transparently, optimistically, and realistically.

We are in the middle of something right now, and we don't know what's going to happen tomorrow. This is a time when you will see real leaders. I watched September 11 out my office window. I saw jumpers—with everyone in my office covering our mouths, trying to process what we were watching. I was in charge of an organization then. I had to decide what to do, with zero experience. There's no playbook. No one tells you what to do when that happens. It's instinctual. And I think that, in this crisis, you will see great leaders show up. They will help us all take steps forward, which is what we need to do every single day.

After you got sick, did you put other people in charge to make decisions in your absence?

That's exactly what I did. For decades, I’ve said this about the success of the organizations that I've run: If I'm not the dumbest one in the room, I'm in the wrong room. I have smart people working for me. If they're not empowered to make decisions when I can't or am not available, then we're not that great of an organization, or I didn't hire right.

My chief operating officer is so beyond her years in what she's done in my absence I’ve got people who are running pieces of business for me that have taken proactive leadership. So, yes, I gave the steering wheel to multiple people, and I let them drive. I can still type, so I let every single person know they're doing a great job. And I do that every day.

When you got sick, your staff must have been concerned for the company and for their own jobs. It’s a moment of massive uncertainty. How did you address that?

Realistically. I spoke to all of my people and said, “Who wouldn't be afraid?” People like to know about tomorrow. Fear of the unknown exists in everybody's mind. We are suddenly in an era where we have no idea. Everything is different now—and you know, that difference is starting to set in. The illusion of control has finally been made clear for what it always was: an illusion. There is no such thing as control.

Once this is all over, do you think everything will go back to normal? Or will there be a lasting impact on you and your company?

It's been said that if you want to figure out your life, figure out what your worst day was. Your worst day was actually your best day, because that's the day that changed you. And I believe that. I've had many in my career. We've all had our fair share. But this one's different. We are in this together, all of us.

We all have fewer options right now. If you're feeling like, “There is no way…”, then this would be a really good time to make a way. To me, what it all boils down to is, How do you enjoy the space between where we are and wherever it is we might be going? Because if you don't say that with a question mark, you're just being misleading—because nobody knows.

You might start with the recognition that the most important things in life aren’t things. It turns out that what we thought might never be gone tomorrow is already is gone in so many ways. And if it wasn't obvious to you before, the people who need help look a lot like people who don't need help.

My feeling is that when little people—and I'm real little; I'm five foot seven—are overwhelmed by big emotions, it's leadership's job to share calm. Not chaos. Chaos is easy to find. Just turn on the news; you'll find plenty of chaos.

If your first thought this morning wasn't, “thank you,” you might want to reconsider what matters now. It seems like we all got dealt some new, real surprising cards, and now we have to learn how to play those new cards. And I say, play the hell out of them.

Jason Feifer is the editor in chief of Entrepreneur magazine, and author of the forthcoming book Build For Tomorrow about how people can become more adaptable in their careers and life. He is also the host of two podcasts: Build For Tomorrow (yes, same name as the book), which is a show that debunks people's fears of change; and Problem Solvers, about entrepreneurs solving unexpected problems in their business. He writes a newsletter about how to find opportunity in change.