How to Delete TikTok

Maybe you're worried about TikTok using your data for nefarious purposes. Perhaps you've spent far too much time watching 15-second videos. Whatever your reason, here's how to get rid of TikTok.

By Jason Cohen August 12, 2020
This story originally appeared on PCMag

TikTok is a social media force — 2 billion+ downloads, capable of capturing users' attention for hours at a time and a surveillance tool for the Chinese. Wait, what?

That last bit is up for debate. The Trump administration has moved to limit the ability of Chinese technology companies to do business in the US, most notably Huawei and ZTE. But it's also going after TikTok because its parent company ByteDance is based in China.

While TikTok has collected the personal data of minors and censored content that is harmful to China, there's no evidence that the Chinese government has misused the personal data of American TikTok users, and TikTok's US execs deny any wrongdoing. The US, however, argues that it's concerned about the potential for abuse. If China decides it wants access to ByteDance user data, ByteDance will likely have no choice but the comply.

As such, President Trump has said TikTok will be banned in the US by Sept. 15, unless ByteDance sells the American arm of the app to a US-based company. Microsoft is currently in negotiations, but it's not a done deal. Stateside TikTok fans could be out of luck by fall.

Maybe you'd like to cut your losses and get out now. Perhaps you've found yourself swiping (and swiping and swiping) and would like those hours of your life back. Whatever the reason, here's how to say farewell to TikTok.

Unlike other social media platforms, TikTok doesn't require you to create an account in order to take advantage of the service. You can download the app and immediately start discovering videos. Don't want it anymore? Just delete TikTok from your phone.

If you have an account, however, uninstalling the app alone won't do anything about the content you have already created and collected, so it's best to wipe the slate clean. 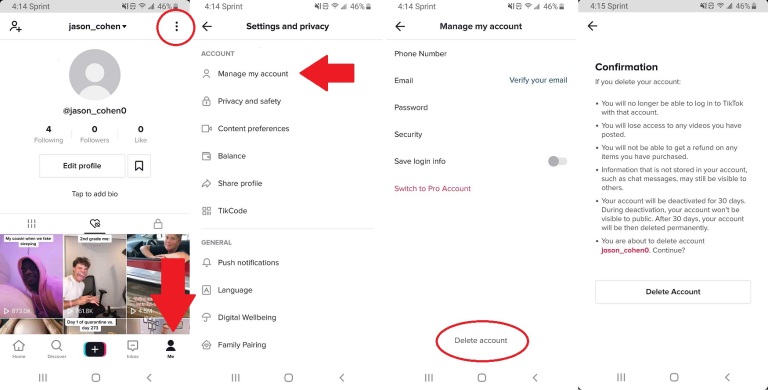 Open the TikTok app, and tap the profile button in the bottom-right corner of the app and select the three-dot menu in the top-right corner. Tap Manage my account and then Delete account at the bottom of the page.

TikTok will warn you about what will be lost. Tap Delete Account again to confirm your decision. At this point, your account will only be deactivated. After 30 days of deactivation, the account will be permanently deleted.

Then just delete the app from your phone. Hold your finger down on the app and either tap Uninstall on Android or tap the X button on iPhone.

What Do the Most-Followed TikTok Brands Have in Common?