After testing it in multiple countries and several US states, Tinder is rolling out its “Face to Face” one-on-one chat feature to users around the world, the company announced. The service will be helpful during the pandemic, as it will let you chat with a potential partner directly on Tinder without the need to meet in person or use an outside video chat service like Zoom.

Such a service can also be fraught with risk, as anyone who has ever used Tinder can imagine. To that end, it has features that “ensure control along the way, prioritizing member’s safety,” Tinder’s Trust and Safety team said.

Just as you can only text chat after a mutual match, Face to Face will only work if both you and your potential date have opted in. So, if you’re interested in a Face to Face, you just tap on the video icon and your match won’t know you’ve done so until they do the same. If you don’t feel like doing a video chat, you can toggle it off at any point. 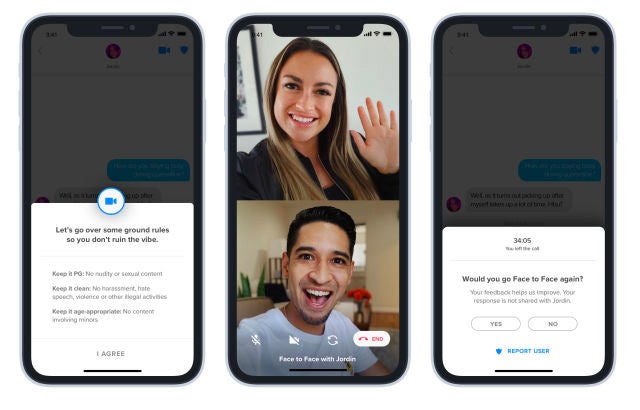 Both partners have to agree to Tinder’s ground rules, have video turned on and be clear in the frame. “Conversation is a two-way street, and it’s better when you’re together 50/50,” according to the press release. “Plus, this helps you make sure you’re putting your best face forward with your match.” At the end of the call, the app will ask for your opinion and let you send a report at any time once the call ends.

Tinder also gave some general advice, like starting slow on text before going to video and being flexible about times for video calls. It also suggested you have an interesting background or accessories, like a book case to show your interests or an unusual hat or piece of jewelry. To help calm any first-date nerves, it also recommended doing an activity like a Pictionary or cooking a dish.

Face to Face should be a useful feature, as it will bridge the gap between a text chat and a live date — a one-on-one conversation is simply a better way to tell if you’re compatible with someone. Just be aware that despite all the precautions and advice, Tinder won’t be able to prevent any harassment that happens during a call — it’ll be up to you to end it. The service is now rolling out across the US and UK, along with Brazil, Australia, Spain, Italy, France, Vietnam, Indonesia, Korea, Taiwan, Thailand, Peru and Chile.

There's a Secret Tinder for Models and Rich People