Are We Walking Into a Recession? How to Handle Russia Invading Ukraine

By Luke Lango February 23, 2022
This story originally appeared on InvestorPlace

Well, it's finally happening. Russia is invading Ukraine — and the stock market isn't too pleased. Yesterday, stocks dropped sharply, with the S&P 500 dropping into correction territory for the first time since the Covid-19 pandemic emerged in early 2020. 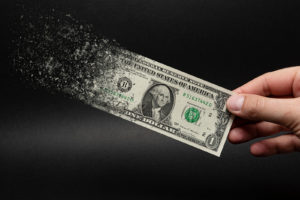 Yet, through the pain, we see a great buying opportunity because history shows that what the market fears from this invasion is very unlikely to materialize.

Specifically, the big economic concern here is the invasion's impact on inflation trends.

Russia is a major producer of oil and wheat. The country accounts for ~11% of global oil production and ~10% of global wheat production. In response to this invasion, the U.S., EU, and a host of other countries either already are or will likely institute sanctions on those exports.

The result will be a spike in energy prices, which — if it lasts — will exacerbate the current inflation dilemma. The U.S. Federal Reserve, alongside most other central banks around the globe, has made it priority No. 1 to fight inflation. And if it accelerates at the hands of spiking commodity prices, that could cause the Fed to move more aggressively in its tightening process.

At the same time, the invasion will likely dampen global economic activity, business spending and consumer confidence, which could cause the global economy to slow. Net net, the invasion could — through a series of twists and turns — lead to the Fed hiking aggressively into a slowing economy. And the result would likely be a recession.

The market is growing fearful of this outcome. Today, alongside the headline drop in stocks, the 10-year Treasury yield was basically flat. The 2-year yield rose six basis points, bringing the 10-2 spread to just 39 basis points.

What Will Come of Russia Invading Ukraine?

Remember: A flattening yield curve is indicative of a bond market that believes an economic slowdown is on the horizon. An inversion has preceded every economic recession in the U.S. over the past 50 years. We're flattening quickly right now and are not too far off from an inversion.

Admittedly, that's some scary stuff. The biggest financial market on the planet is saying we may be walking into a recession.

However, while we believe these recession fears are partially justified, we also believe that they are being overstated at the current moment.

That is, we do not believe that economic sanctions against Russia will result in a significant or prolonged spike in energy prices. Moreover, we don't think that inflation pressures will rise over the next six months because of this invasion or that the Fed will move more quickly.

Rather, we believe the opposite could happen.

Let's look to the last time the Western world imposed significant economic sanctions on Russia, which was during its invasion of Crimea in February and March of 2014. In response to that invasion, the U.S. and EU enforced strong sanctions on Russia. This resulted in a big near-term spike in energy prices and inflation — but that spike proved to be very short-lived.

From mid-2014 to early 2015, commodity prices actually plunged. And inflation — as measured by the year-over-year rise in the U.S. Consumer Price Index — dropped to zero.

In other words, the last time the Western world imposed significant economic sanctions on Russia, it preceded a prolonged period of plunging energy prices and decelerating inflation. 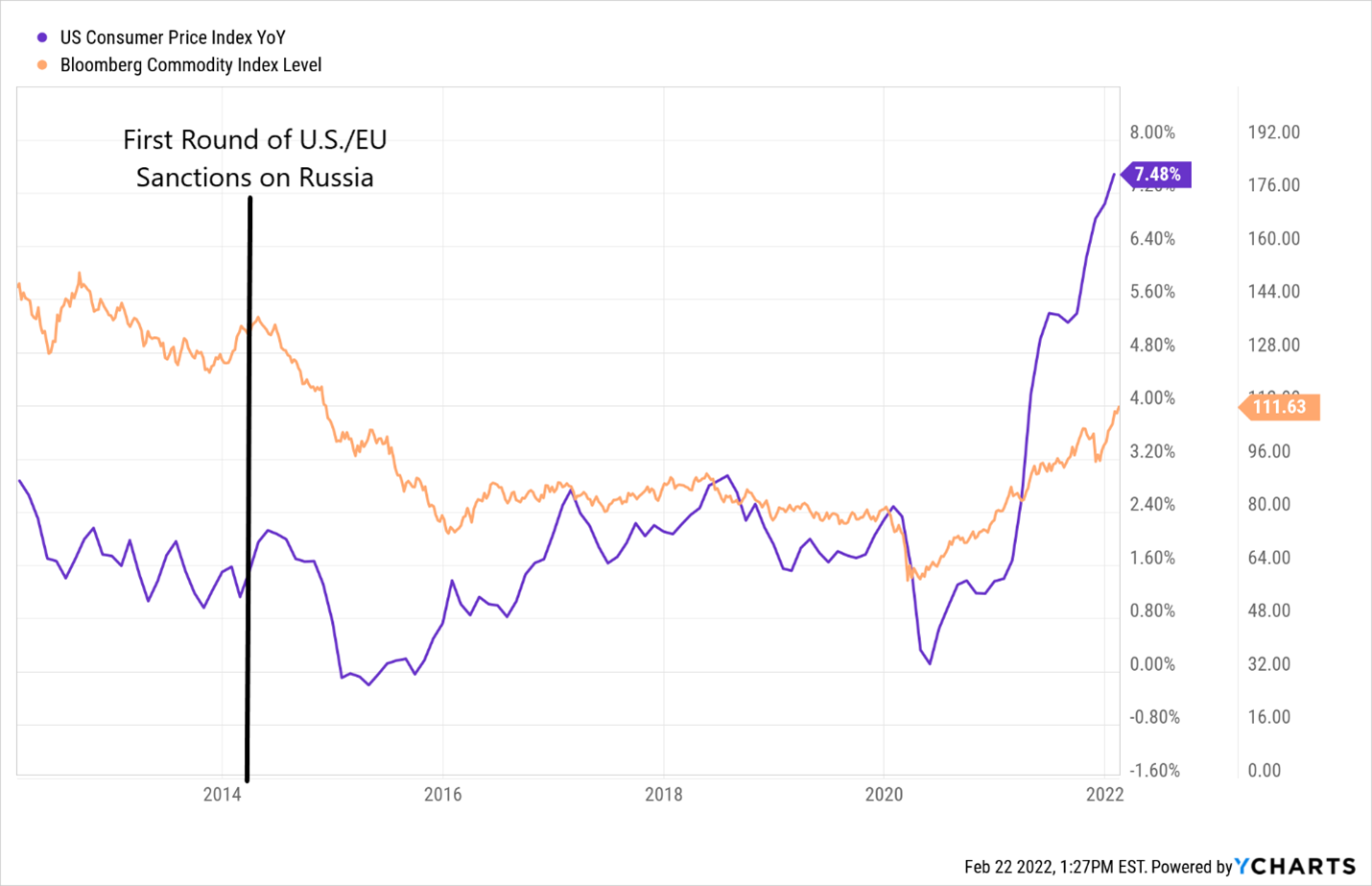 Will the same happen this time? It's tough to say.

A Buying Opportunity in Disguise

But the point of this analysis is to show that these sanctions on Russia are not a material driver of energy prices or inflation in the medium- or long-term. Rather, they are quite meaningless.

Therefore, we expect inflation trends over the next six-plus months to be determined by supply chain disruptions and consumer demand. The Russian invasion of Ukraine will not significantly impact either of those. And where it does have some impact — perhaps lower consumer spending due to waning confidence — it will actually help decelerate inflationary pressures.

Far more important is the shift in the global approach to Covid-19 — from "eliminate" to "live with Covid." This will help to dramatically ease supply chain pressures in the coming months. As those tensions ease, we continue to believe inflation will decelerate, even if Russia fully annexes Ukraine.

Overall, we think the recent geopolitically driven selling in equities is creating a buying opportunity. The S&P 500 now trades at 18.8X forward earnings, which is roughly in line with its five-year-average forward earnings multiple. Yet, the 10-year Treasury yield remains below 2%. That's an attractive valuation setup for stocks to outperform, so long as earnings growth remains healthy. And we suspect that will be the case in 2022.

We believe the buying opportunity is especially attractive in hypergrowth tech stocks because they're dirt-cheap relative to their long-term growth potential. And that growth does not at all rely on a good geopolitical situation in Eastern Europe.

Near-term dips in long-term winners equate to great buying opportunities. This time is no different.

And perhaps most interestingly, we think that the best stock to buy as a result of Russia invading Ukraine is a hypergrowth stock we already own in our model Innovation Investor portfolio.

The reality is that modern warfare isn't fought exclusively on battlefields between people. It's also fought digitally in the cloud. Many believe that the current incursion of Ukraine could involve Russia attempting cyberattacks on the U.S. and EU in the coming weeks. The threat of such assaults emphasizes the need for next-gen cybersecurity systems to defend government and intelligence data. And a small tech company we own in our Innovation Investor portfolio is working with nearly every allied government and intelligence agency to make them.

Indeed, its stock price was up yesterday during the broader market selloff.

Which stock am I talking about? Find out here, and I'll show you how to drown out today's geopolitical noise and pick long-term stock market winners in any market.

The post Are We Walking Into a Recession? How to Handle Russia Invading Ukraine appeared first on InvestorPlace.