Lemonade Stock Is a Lemon No Matter How You Slice It

InvestorPlace - Stock Market News, Stock Advice & Trading Tips As it burns through cash, with little indication as to when it will become profitable, LMND stock is a lemon,...

By Louis Navellier and the InvestorPlace Research Staff February 28, 2022
This story originally appeared on InvestorPlace

Lemonade (NYSE:LMND) stock is yet another "disruptor" where sentiment for its shares has done a 180. 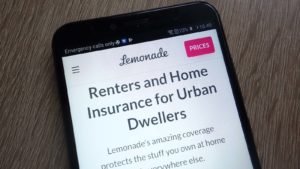 An "insurtech" play, LMND stock was a big favorite in late 2020 and early 2021. With investors excited about its prospects, the stock zoomed from its IPO price of $29 per share to as much as $183.26 per share. But over the past year, it has made a full trip all the way to its debut price, and then some. Today, the stock trades for around $23 per share.

After falling more than 87%, you may think that it's the perfect place to bottom-fish. With such a big drop, surely the market has overreacted. Right? Wrong. Although changes in the stock market have driven much of its drop since November, shares began their descent well before investors began to become less bullish on speculative growth plays.

That is, poor operating performance has driven the lion's share of its price decline. Its business model is unsustainable. Cash continues to fly out the door. Management's most recent guidance update suggests little improvement on the horizon. Put it all together, and it's wise to expect more disappointment, and lower prices, for this lemon of a stock.

LMND Stock at a Glance

As I mentioned above, Lemonade is an insurtech company. What is insurtech? Think of it as fintech for the insurance world. Much like there are fintech firms that are digital-first banks, this company is a digital-first provider of property and casualty insurance policies.

Offerings include auto insurance, homeowners' and renter's insurance and even pet insurance. More importantly, the company does things a bit differently than "old school" names in the industry.

Instead of relying on classical actuarial methods to manage underwriting risk and to price policies, it uses a method that also incorporates more modern algorithmic methods. Instead of employing scores of back office employees, and local agents, it uses chatbots to process claims, and to turn leads into policyholders.

A year ago, with projections of high growth, many became very bullish that this company would beat the venerable insurers at their own game. But as we've seen play out over the past 12 months, it's far from proven that its business model is sustainable. It's unclear when, if ever, it will get out of the red. Market conditions have played a role in its tanking. Yet it's the company's terrible operating performance that has been the main cause of the high decline in the price of LMND stock.

No End in Sight for Lemonade's Heavy Losses

Lemonade's "disruptive" business model has enabled it to build up a substantial base of policyholders in a relatively short amount of time. In large part, due to its catering to the needs/wants of Millennials and Generation Z. These younger generational cohorts prefer its convenient, all-online user experience. Not to mention, the ability to buy policies, and file claims, without having to get on the phone.

This company hasn't had an issue with growing its revenue. But profitability? That has been a major challenge, and the key issue behind the poor performance of LMND stock since early 2021. Like many other early stage companies, its focus has been on scaling up today, worrying about producing a profit tomorrow. As a result, its gross profit hasn't been enough to cover its high overhead costs.

To top things off, losses next year could be higher than expected. This guidance excluded the impact of its pending acquisition of rival Metromile (NASDAQ:MILE), which also continues to report high losses.

Earning an "F" rating in my Portfolio Grader, it's hard to be confident Lemonade's fortunes will improve. Yes, the purchase of Metromile will help this company grow its share of the auto insurance market.

But as it struggles to get costs under control, and is adding another unprofitable business to its plate? It's reasonable to assume it'll burn through more of its cash position. Down the road, this could mean it'll need to replenish through a dilutive capital raise. This will put more pressure on shares.

Heavily shorted (34.6% of float), you may think there's high "squeeze potential" here. However, the short side is likely on the money with its big bet against LMND stock. There's a high chance things stay bad, driving it to even lower prices.

The post Lemonade Stock Is a Lemon No Matter How You Slice It appeared first on InvestorPlace.