In this article I will analyze Iveda Solutions (IVDA) to determine if the stock is a buy, sell, or hold.

By Oleksandr Pylypenko April 19, 2022
This story originally appeared on StockNews

In this article I will analyze Iveda Solutions (IVDA) to determine if the stock is a buy, sell, or hold.

Iveda Solutions became public on the Nasdaq through a traditional IPO on April 1st, 2022, by selling 1.89 million shares at $4.25 a share. The company uplisted its shares from the OTC on April 1st, conducting a 1-for-8 reverse stock split before the IPO. The company's gross proceeds from the stock offering are expected to be about $8 million, and the company plans to spend it on general corporate purposes. It's important to note that the stock ended its first trading session at $3.77. However, the company has since given back those gains, closing Monday's trading session at $2.54, about 67% lower than its initial public offering price. 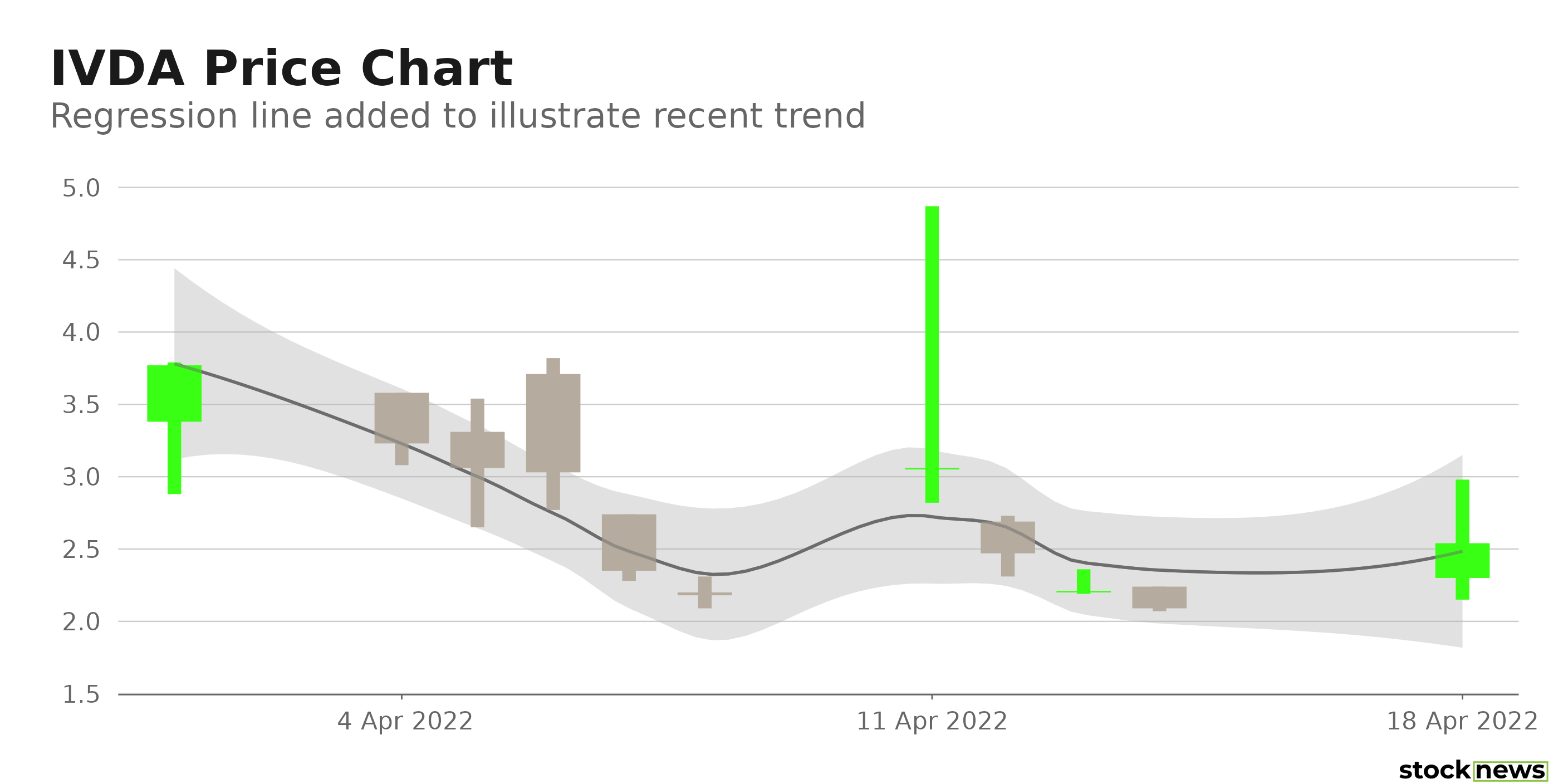 With that being said, today, I am going to analyze Iveda Solutions to see whether the company presents a buying opportunity at current levels.

On April 18th, the company announced that it had signed up a strategic partnership agreement with a worldwide provider of IT and communications technology in Japan, known as IP Dream. Under the terms of the deal, Iveda will sell 50 units of its Utilus smart pole to IP Dream with a transaction value of $1.3 million. Shares of Iveda soared 21.53% during the trading session in response to this announcement.

On April 6th, Iveda Solutions achieved another milestone after the company said that its products would be utilized for the Taoyuan Aerotropolis project. The project should begin this year, with completion expected in 2028. The company's CEO David Ly said, "We are proud to be a part of this massive expansion project, which will help fuel our growth trajectory and will be another showcase of Iveda's smart city capabilities for similar projects worldwide. We estimate $5 to $7 million revenue from this multi-year project."

Iveda Solutions' total revenue for its fiscal year, which ended December 31rd, 2021, increased 29% year-over-year to $1.9 million, driven by higer equipment sales from MEGAsys amid the award of additional long-term contracts. The lion's share of IVDA's total revenues is made up of equipment sales and installation revenue, which totaled $1.65 million, or 86% of net revenue in FY21. Also, the company's recurring service revenue stood at $264,402 in FY21, representing an 18.8% decrease compared to a prior-year period.

However, the company's operating expenses grew by 111.76% year-over-year to $3.6 million in FY21. This increase was related to increased research and development expenses for IvedaAI and higher general and administrative costs.

Cash used to run the company's operations during the fiscal year of 2021 was about $2.0 million, significantly up from $0.1 million during the nine months ended December 31st, 2020. As of December 31st, 2021, the company reported a weak balance sheet with cash and cash equivalents of $1.09 million in its U.S.-based segment and $0.29 million in its Taiwan-based segment.

However, the company's recently raised funds from the IPO should enhance its liquidity position. On the grounds of this, I would expect the cash on the balance to be enough to perform its operating activities at least by the year-end.

I remain neutral on IVDA stock for now. The company's share price remains highly volatile, which is a red sign for long-term investors. Although the company's equipment sales show a positive trend, its deteriorating recurring revenue figure could act as a concern, especially considering the growth trends in the software space. In addition, the company's rising cash burn rate creates the risk of further dilution in the future as it is the easiest way to raise additional funds at the moment. Finally, the company's rich valuations, coupled with a relatively moderate top-line growth, could negatively affect its stock price.

About the Author: Oleksandr Pylypenko

Oleksandr Pylypenko has more than 5 years of experience as an investment analyst and financial journalist. He has previously been a contributing writer for Seeking Alpha, Talks Market, and Market Realist.