Does Goldman Sachs Group Stock Deserve a Place in Your Portfolio?

The shares of leading investment banking firm Goldman Sachs Group (GS) have plummeted nearly 20% in price this year amid investor fears of heightened default risk due to the war...

By Subhasree Kar May 19, 2022
This story originally appeared on StockNews

The shares of leading investment banking firm Goldman Sachs Group (GS) have plummeted nearly 20% in price this year amid investor fears of heightened default risk due to the war in Ukraine and U.S. regulators' crackdown on the SPAC market. So, is GS a smart investment now? Keep reading to learn our view.

Wall Street expects a greater risk of default by major banks, with worsening credit risk since the Russian invasion of Ukraine. The cost to insure bonds from these banks against default hit two-year highs earlier this month amid heightened worries about the Fed's aggressive moves to tame inflation and the possibility of a recession. GS slashed its total credit exposure to Russia and said that market exposure tied to Russia and total exposure to Ukraine were not material. It was the first major U.S. bank to announce a retreat from Russia after the country invaded Ukraine. GS also noted that the war has so far resulted in a net loss of $300 million for the bank in the first quarter. The invasion has hampered the mainstay businesses of some big U.S. banks.

In addition, GS has announced that it will reduce its involvement with blank-check companies as U.S. regulators continue to clamp down on what was one of the hottest trends on Wall Street in recent years. The thriving special purpose acquisition company (SPAC) market had benefited the bank greatly, but the tightening scrutiny and the uncertainty over the war are adding to its woes. 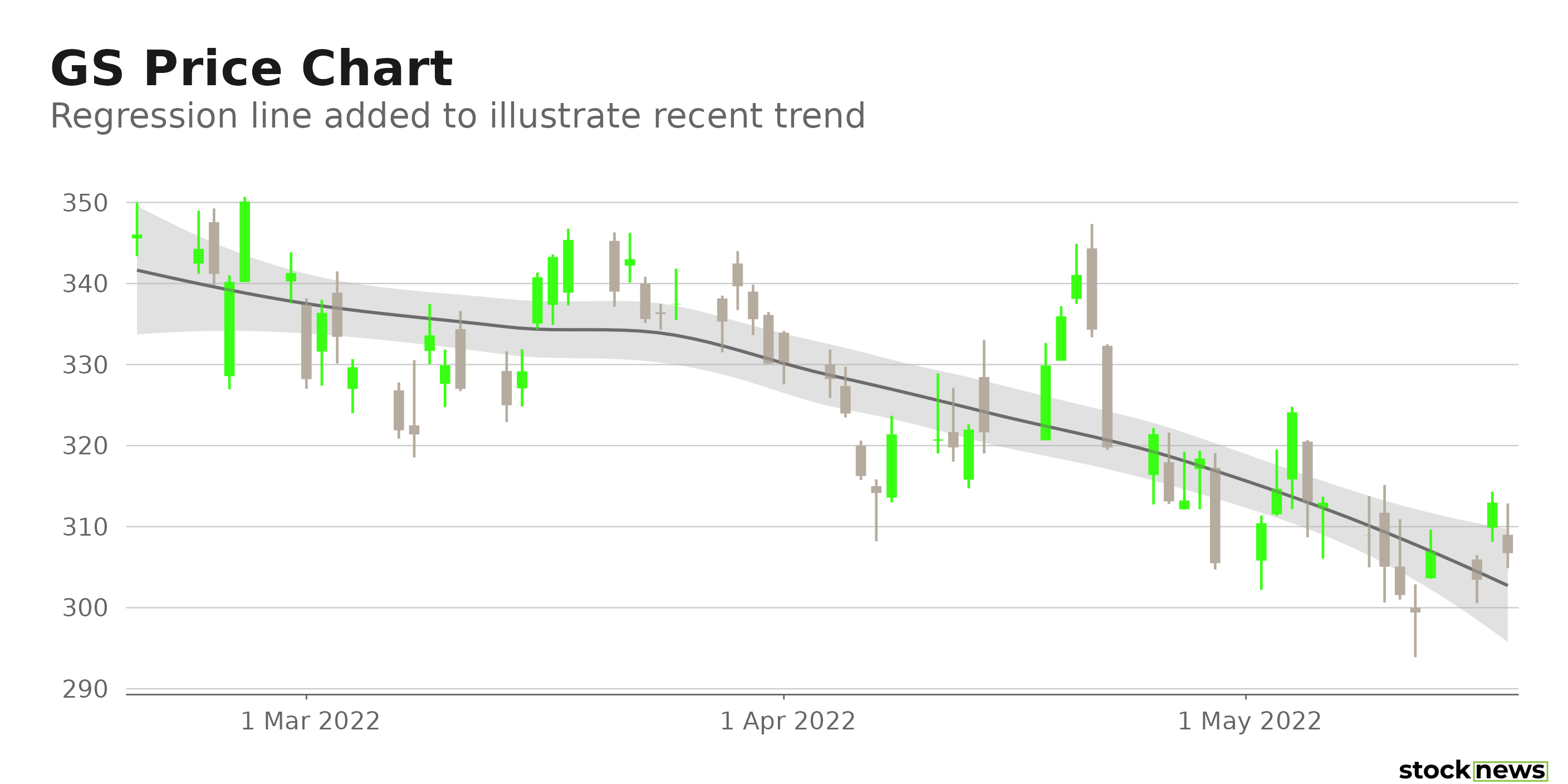 Here is what could shape GS' performance in the near term:

"It was a turbulent quarter dominated by the devastating invasion of Ukraine," CEO David Solomon said. "The rapidly evolving market environment had a significant effect on client activity as risk intermediation came to the fore and equity issuance came to a near standstill," he added.

GS has an overall C rating, which translates to Neutral in our proprietary POWR Ratings system. The POWR Ratings are calculated by considering 118 distinct factors, with each factor weighted to an optimal degree.

The stock has a grade of C for Quality, which is consistent with its mixed profitability.

GS has an F grade for Growth. Its weak performance in the last reported quarter and analysts' expectation of a further decline in its top and bottom line justifies this grade.

Among the 24 stocks in the C-rated Investment Brokerage industry, GS is ranked #19.

Beyond what I have stated above, one can also view GS' grades for Value, Sentiment, Momentum, and Stability here.

View the top-rated stocks in the Investment Brokerage industry here.

The headwinds from the Russia-Ukraine and changing market environment have greatly hampered GS' performance in the first quarter of 2022. Moreover, analysts are bearish about the bank's near-term prospects. Thus, given the uncertainties ahead, I think it could be best to wait for a better entry point in the stock.

How Does Goldman Sachs Group, Inc. (GS) Stack Up Against its Peers?

While GS has an overall POWR Rating of C, one might want to consider taking a look at its industry peers, Manning & Napier, Inc. (MN), which has an A (Strong Buy) rating, and PJT Partners Inc. (PJT) and Evercore Inc. (EVR) which have a B (Buy) rating.

The post Does Goldman Sachs Group Stock Deserve a Place in Your Portfolio? appeared first on StockNews.com