Is Macerich a Good REIT to Own?

Real estate investment trust (REIT) Macerich's (MAC) has been ramping up its efforts to move past pandemic disruptions and reported significant improvement in its last quarter, with robust leasing demand...

By Subhasree Kar May 25, 2022
This story originally appeared on StockNews

Real estate investment trust (REIT) Macerich's (MAC) has been ramping up its efforts to move past pandemic disruptions and reported significant improvement in its last quarter, with robust leasing demand and tenant sales. However, MAC's shares have plunged more than 30% in price this year. And considering bearish analysts' sentiments around the stock, the question is, is MAC a buy now? Keep reading to learn our view.

MAC is rebounding from the COVID-19 pandemic hit, with people returning to in-person experiences and mall visits since last year with easing of restrictions and increasing consumer demand and spending. In the first quarter, ended March 31, 2022, MAC's portfolio comparable tenant sales from spaces less than 10,000 were 14.5% higher than the first quarter of 2021 and 11.5% higher than the first quarter of 2019. Its portfolio tenant sales per square foot for spaces less than 10,000 square feet for the trailing 12 months, ended March 31, 2022, were a record high of $843. Also, during the quarter, MAC signed 22% more leases than it signed during the first quarter of 2021. Furthermore, its same-center net operating income (NOI), excluding lease termination income, increased 24.7% year-over-year. However, the company's bottom line is still in the red. 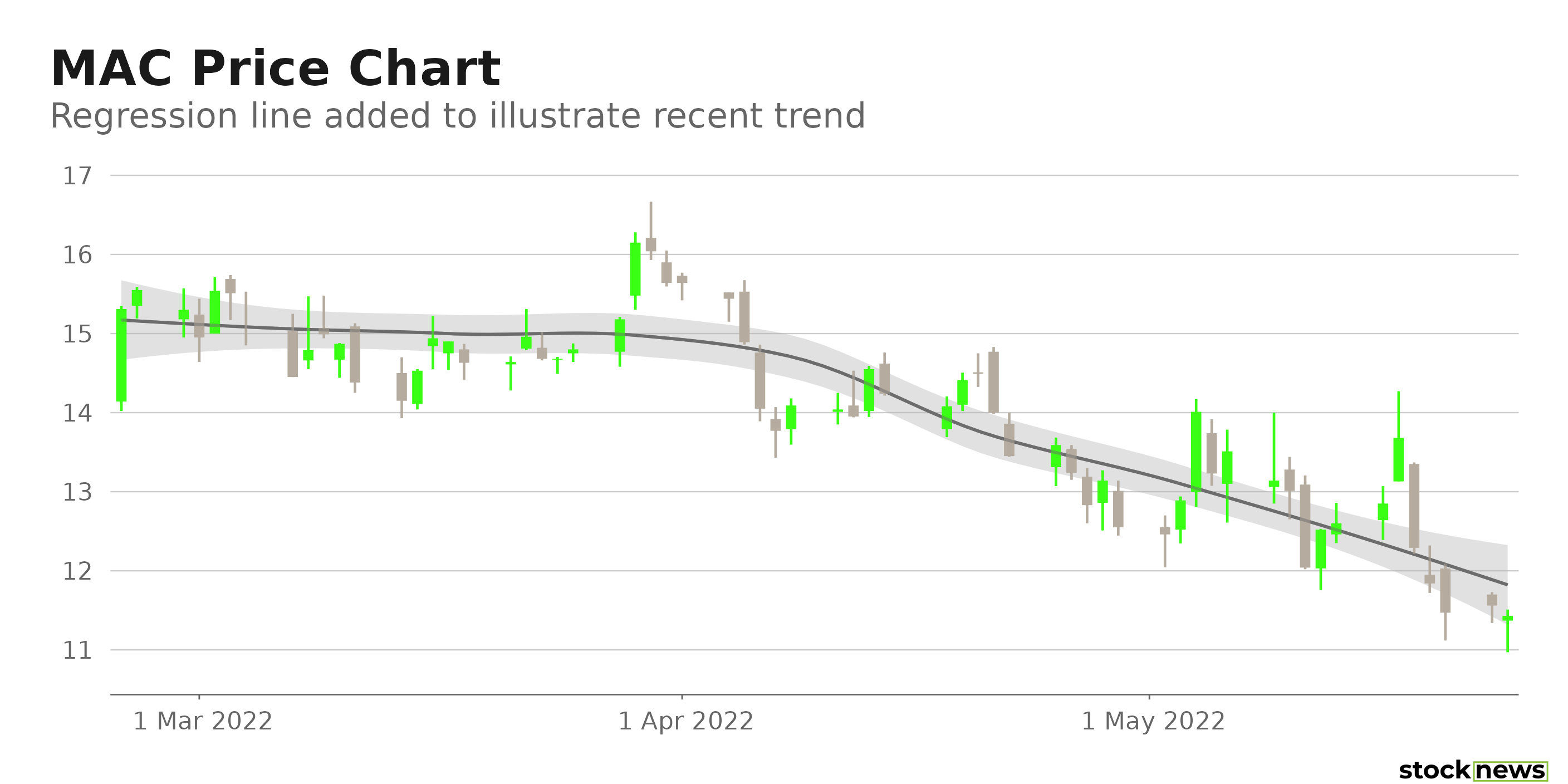 Here is what could shape MAC's performance in the near term:

MAC has an overall C rating, which translates to Neutral in our proprietary POWR Ratings system. The POWR Ratings are calculated by considering 118 distinct factors, with each factor weighted to an optimal degree.

The stock has a grade of C for Quality, which is consistent with its mixed profitability.

MAC has an F grade for Sentiment. Bearish analyst sentiment about the stock justifies this grade.

Among the 32 stocks in the D-rated REITs - Retail industry, MAC is ranked #27.

Beyond what I have stated above, one can also view MAC's grades for Value, Growth, Momentum, and Stability here.

View the top-rated stocks in the REITs – Retail industry here.

Although REITs typically tend to be attractive to income investors due to their reliable dividend payouts, MAC's dividend payouts have declined at a 41.4% CAGR over the past three years and 26.4% over the past five years. Furthermore, it has an extremely high dividend payout ratio of 315.8%, which questions the sustainability of its dividend payment. The company has demonstrated a significant rebound in its last reported quarter, but I think it could be wise to wait for further improvement in its financial positioning before investing in the stock.

How Does the Macerich Company (MAC) Stack Up Against its Peers?

MAC shares were unchanged in premarket trading Wednesday. Year-to-date, MAC has declined -32.42%, versus a -17.06% rise in the benchmark S&P 500 index during the same period.

The post Is Macerich a Good REIT to Own? appeared first on StockNews.com