My language, my news is the goal, and hyperlocal is what a user desires

By Raju Vanapala July 9, 2022
Opinions expressed by Entrepreneur contributors are their own.
You're reading Entrepreneur India, an international franchise of Entrepreneur Media.

The 'instant' culture and curating news with local flavour—local language and local news—is where news apps are trending. My language, my news is the goal, and hyperlocal is what a user desires.

The 21st-century 'connected world' is consuming a plethora of content and hundreds of media outlets are churning out content at a scale and speed unimaginable a couple of decades ago. Millions of people today carry their television sets in their pockets in the form of smartphones. Post-pandemic, as the physical touch points have also increased and people want to keep up with the latest on the go, news via digital, i.e., on the phone via news-based apps, is becoming popular.

It is clear that people want to read the news, and they want to read it fast. Time is a constraint. People are no longer willing to spend long hours scouring news websites to get the information that adds value to their lives.

To meet the demands of the new-age users, many digital platforms transformed their entire content ecosystem by outperforming several functions, such as online distribution, hosting, aggregation and curation of short news.

According to the 10th edition of the Reuters Institute for the Study of Journalism's Digital News Report 2021, 82 per cent of Indians read the news online, and 73 per cent use smartphones to read the news. In the year 2020, the number of times news and magazine apps were downloaded across India spiked to over 300 million, indicating a 12 per cent growth. 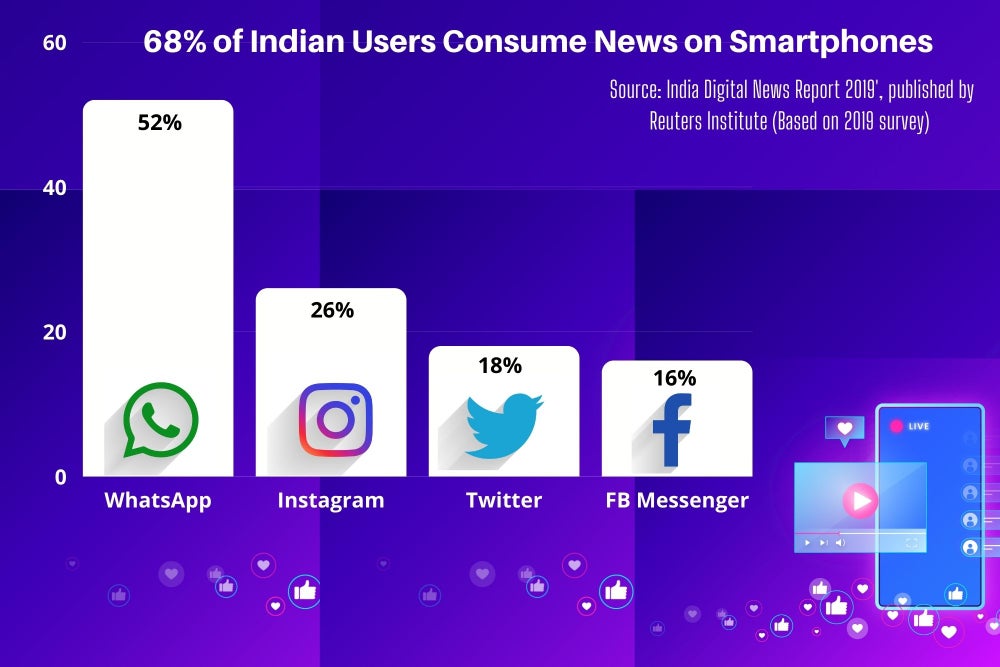 The content generators vying for space have aligned their content to make it crisp to suit the fast-paced usage. News and content are packed into 60-word or minute capsules for maximum delivery.

Since the audience's attention span has reduced to less than a minute, presenting news in a succinct format is the new norm, and news aggregators and digital platform designers know that they need to innovate to retain users' interest. This is where short-form news apps have made inroads.

Short news apps are challenging the mammoth giants on the digital turf. According to a study, only 18 per cent of viewers are now checking regular news websites, whereas others get their news from short news apps. Apps such as Way2News have a far bigger user base today than news websites.

The demographic age profile has also expanded post-pandemic. Smartphones have reached the palms of a wide age group, from 12-year-olds to senior citizens. Though urban consumption is more, rural India is catching up due to growing internet bandwidth. Urban India has only 20 per cent fewer Internet users than rural ones. A large population lives in villages, and they too want to be well-informed. Hence, the vernacular news market is growing and has huge potential.

Regional players in vernacular languages are doling out hyper-local content contributed by thousands of writers and reporters who are reporting about local events. Apart from international and national, rural households are now even getting real-time village-level news on their phones, which was hitherto missing.

According to the 2022 Digital News Report, India is a mobile-focused market, with 72 per cent accessing news through smartphones. This leaves a 28 per cent user gap to be filled.

Nevertheless, the silver lining is that the digital revolution is going strong and connecting people, both urban and rural, cutting across language and shattering social taboos and stigmas. In days to come, the consumer will be the winner.