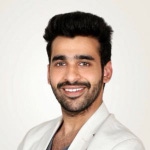 Author of the book ‘Noora’ - a collection of poems. He is an international level chess player who has won the Hawaii Chess Championship (under 2000) and the prestigious Philadelphia
Open (Under 2000) runners-up. In 2017, he was awarded the Arena Grandmaster title (AGM) by the president of World Chess Federation. He won the ‘young humanitarian’ award for
his notable initiative ‘rise of the girl child’ under Hon'ble Prime Minister’s ‘Beti Bachao, Beti Padhao’ in which he taught blind girls the game of chess.

Why is it important to be mentally healthy for young entrepreneurs?