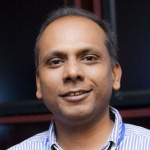 Manish is a keen technology, people and business leader. He brings in over 23 years of operating and advisory experience across different sectors. He is the Founding Partner of pi Ventures, a venture fund focussed on Machine Learning, Artificial Intelligence and IoT based out of India.

He has been actively involved in the startup eco-system in India for the last few years. He co-founded LetsVenture.com and led it to become the leading marketplace for startups & early stage investors in India (enabled 15 startups raising their rounds) within a very short span of time. He is a keen mentor of startups and loves working with them as an advisor and an angel investor. Recently he was rated as one of the top angel investors in India by VC Circle. He is on the boards of several startups.
Before LetsVenture, he was the India country manager for Sling Media Inc, a silicon valley based consumer electronic startup. He built the R&D and product team in India from scratch and took it to a successful acquisition.
He is also a founder-mentor for an initiative called Women Entrepreneur Quest, which is an annual event for recognizing and rewarding women entrepreneurs in India. This initiative was founded in 2010 and will be hosting its fifth later this year.
After doing his engineering from IIT Kanpur in 1992, he has been instrumental in building several products and teams in different startups and established organisations like Sling Media, Ittiam Systems and Motorola. He has contributed to the standardisation of MPEG-4 standard as well and holds couple of video technology patents to his name. He has experience in building hardware standalone products as well as cloud enabled software products.

Why Should Investors Start Looking at AI Companies

India is arriving slowly but surely on the global AI scene and therefore investors should take a serious look at the space!