How Groupon Thinks It Can Become a $100 Billion Company

Instead of just pumping out daily deals, the company wants to become a mobile, local commerce powerhouse.

The co-CEOs of Groupon, Eric Lefkofsky and Ted Leonsis, stopped by our offices, along with CFO Jason Child and other senior Groupon executives.

They had some interesting things to say.

Groupon , you may recall, is a four year-old digital commerce company based in Chicago. Groupon invented the "daily-deal" industry, grew faster than just about any other company in history, rejected a $6 billion cash buyout offer from Google, and then went public in late 2011 at $20 a share.

Then the company blew its numbers.

And the growth of the U.S. business screeched to a halt.

And the international business imploded.

And the young, charismatic CEO, Andrew Mason, got canned.

Now, Groupon's business appears to be stabilizing, and the stock has recovered to about $7 a share. The co-CEOs, Lefkofsky and Leonsis, have run the company for several months, and they will continue to run it for at least another couple of months until a new CEO is hired.

Leonsis, who also owns the Washington Capitals, was still mourning the team's shocking loss to the New York Rangers in the first round of NHL Stanley Cup Playoffs. But he put the nightmare Game 7 behind him and focused on Groupon .

Here's what we learned: 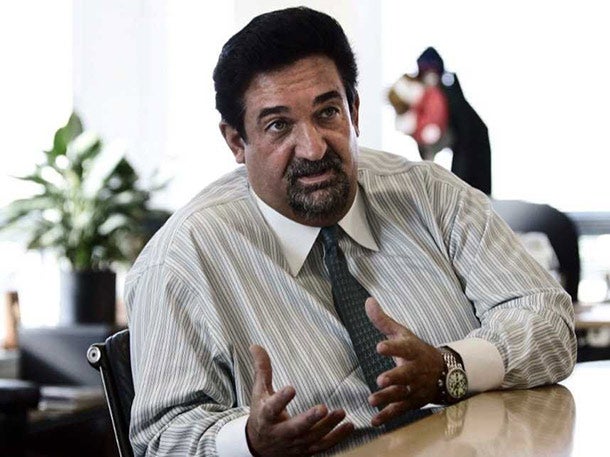 Groupon's vision is to become a gigantic mobile local commerce company--the Amazon or eBay of local. Instead of just pumping out "daily deals" via email offers, Groupon wants to become the place you go (via your mobile device) to find everyday deals and discounts on a full range of products and services wherever you happen to be. The company will eventually offer deals and discounts with merchant clients in many more categories of products and services than it does today.

The search for a new CEO

Groupon has actually not yet retained a search firm to hire a new CEO. It will do so in June, after the next board meeting.

Lefkofsky and Leonsis said they haven't hired a new CEO yet because they wanted to run the company for a while to be sure they knew what kind of CEO they wanted to hire.

The new CEO will not bring the "vision" for Groupon . The vision is already there. The new CEO will either buy into the existing vision, or he or she will presumably have a short stay at the company.

I had never met Eric Lefkofsky before. Based on some of what I had read about him, I had a vision of a cold, calculating puppet-master who dispatched orders (and CEO pink slips) from a dark room somewhere. I was surprised to discover that Lefkofsky is affable and charming, in addition to smart. He should put himself in front of TV cameras more. He puts a good face on the company.

Lefkofsky, Groupon 's original investor, took a lot of heat for selling $300 million of stock a year before Groupon went public, in a deal in which nearly $1 billion of new investor cash went to existing investors instead of to Groupon . But he hasn't sold a share since.

Groupon is still, by one measure, growing

Given some of the rhetoric around the company in the 18 months since the IPO, you might think it was on death's door.

Despite all the trouble it has experienced, Groupon is still modestly growing its revenue (+8% year over year in Q1) and still generating positive operating income ($21 million in Q1). 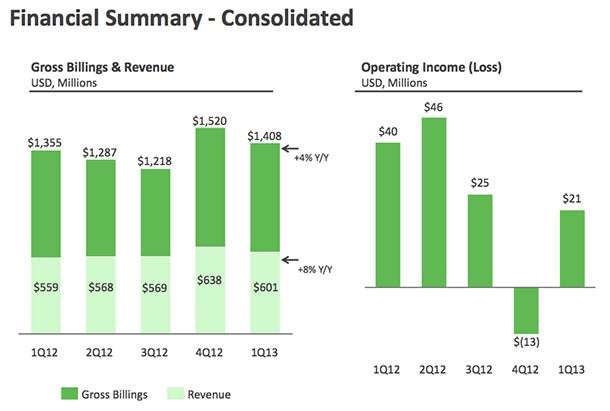 The bad news is that the company's gross margin has dropped, so gross profit is shrinking, and the growth of the "goods" business has hurt the company's once-impressive cash flow, which has now gone negative. 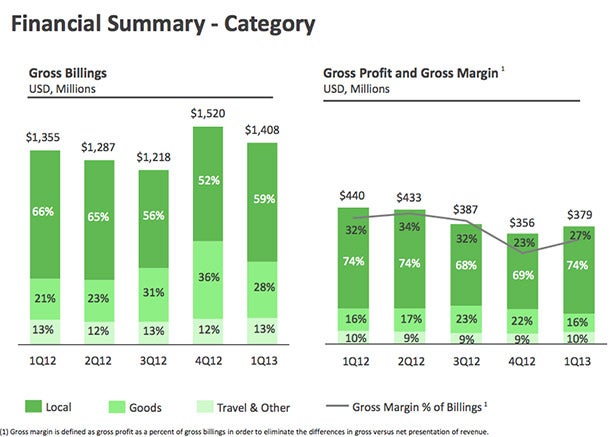 But Groupon has plenty of liquidity--north of $1.1 billion of cash. And the business does appear to be stabilizing.

If Groupon can eventually grow to $10 billion of revenue, let alone the $100 billion that Co-CEO Leonsis mentioned, Groupon 's shareholders should be amply rewarded. (The company's market value is currently about $5 billion).

The capabilities of the new CEO will be important, as will the staunching of the bleeding of the international business. And the company will have to demonstrate that it can become a destination for consumer-driven commerce, rather than a "push" driven email deals company.

But the massive local opportunity outlined by Lefkofsky is real. And Groupon is in an excellent position to make this vision a reality.