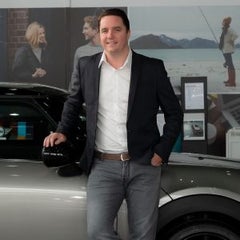 Co-founder and CEO of ekar

Vilhelm Hedberg is the co-founder and CEO of ekar, the Middle East’s fastest growing car share app. Vilhelm was born in Caracas, Venezuela, to Norwegian parents. After spending his adolescence in England, his family later moved to Florida in 1993 where he attended high school and later graduated with a BBA from the University of Florida. Vilhelm later went on to earn an MBA in International Business from EAE Barcelona. Vilhelm holds over 10 years of experience in the fields of Quality Management and Logistics, his first role in the UAE being at Wilhelmsen Lines, where he was responsible for the shipment of over one million automobiles throughout the Middle East. His career quickly progressed and he soon became Partner at QMS Global, one of the largest ISO Certification companies in the world where he was responsible for the development of QMS Global FZ LLC, representing Asia and Africa. 2016 saw the launch of Ekar, the Middle East’s first pay-as-you-go hourly car rental service. In 2016, Ekar was selected by the RTA as the provider for 100 vehicle car share project, and with other key clients, including Emirates Airlines and Etihad Airways, the success of the company can only develop.

My startup, ekar, had three employees in December 2016, and will have over 100 employed by end of 2018, making ekar one of the fastest-growing startups in UAE history.