By Kareem Chehayeb
August 17, 2015
Opinions expressed by Entrepreneur contributors are their own.
You're reading Entrepreneur Middle East, an international franchise of Entrepreneur Media.

CEO Reem Haj Ali was inspired to develop DoctorUna back in 2012 after noticing the "difficulties that arise when a person is attempting to book an appointment with a doctor." She also noticed that relying on word-of-mouth to find a doctor is very limiting, mentioning the hassle of trying to figure out "who is the right specialist, if they cover the required insurance or if the location is convenient." There is also the potential language barrier, which obviously applies in more countries than others in the MENA region.

So how exactly does DoctorUna work? CEO Haj Ali elaborates on some of the platform's features. Users can use DoctorUna to search for doctors based on their specialty, gender, geographic location, and even on a compatible insurance provider. Each doctor has an elaborate bio, as well as patient reviews and ratings that she describes as "verified." While potential patients will definitely benefit from this, this platform could also boost the presence of many doctors who she's noticed don't have much of an online presence to begin with. DoctorUna is currently available in the UAE, Egypt, Kuwait, and Jordan.

Developing this online platform wasn't exactly a walk in the park, but the DoctorUna team was to stay on track towards creating what the CEO describes as a "functional and robust user friendly solution." While DoctorUna's CEO dealt with challenges to get the platform working in its best form, her academic background and work history in the field of medicine in the region definitely gave her an upper hand- Haj Ali holds a Master's degree in Physical Medicine and Rehabilitation, and has been practicing medicine for over 15 years in Dubai and Abu Dhabi in various hospitals. But the hurdles they faced weren't exclusively on the technical side of things, with Haj Ali explaining that they had to "adapt to many models of how healthcare professionals managed their calendars and availability." With regard to the development process, she says that while its "initial stage" was not capital-intensive at all, costs got heftier over time. Later on, it did "require a substantial amount of investment to design and build a robust and user friendly solution; especially with many integration points." She also doesn't rule out the necessary investments in human capital to "build a consumer brand" and to have a "very committed sales operations team." Thankfully, DoctorUna enjoys investment from more than one angel investor, although Haj Ali didn't specify where the capital came from. 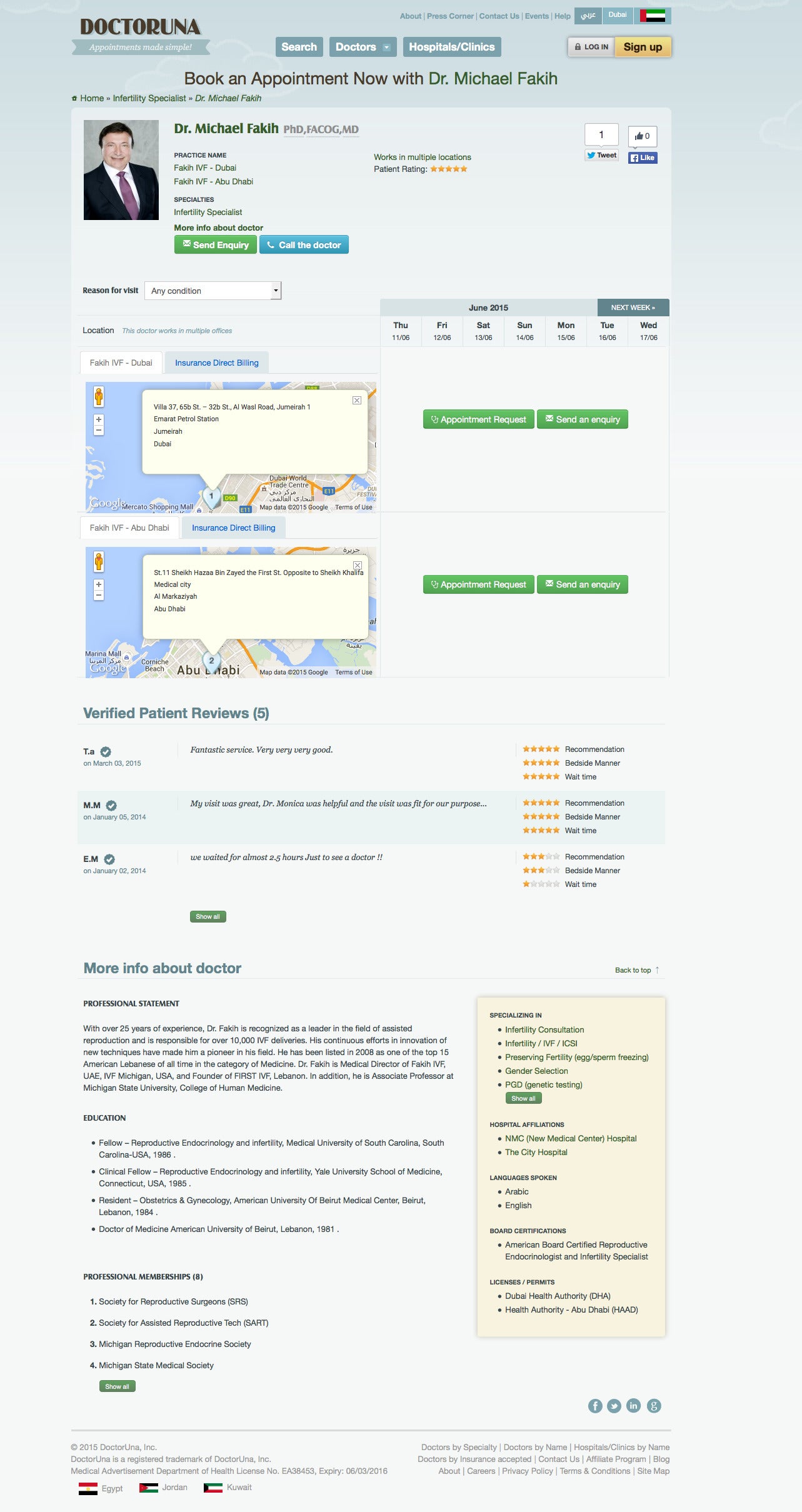 Throughout the conversation, I noticed that even though DoctorUna is available for the general public to use, has multiple doctors from different medical backgrounds on it, and doesn't have a lot of competition in the MENA region, the CEO doesn't seem to see DoctorUna as having reached an end-stage in its development. The vision seems to constantly continue and evolve infinitely, which is a very good sign for any entrepreneur, regardless of whether they're in the tech sector or not. From Haj Ali's viewpoint however, this strategy is deliberate, as she believes there are several other competitors in the region, and she also points toward the rise of similar platforms on a global scale.

In addition to the features already mentioned, DoctorUna provides email and SMS booking reminders, and is bilingual (Haj Ali mentions that 40% of DoctorUna's users use the platform in Arabic). When asked about the importance of having the region's native language in entrepreneurial developments, the CEO says that unless you're targeting foreign expats, it would be a mistake to neglect it as you'd be potentially alienating a "large portion of their market." I was also quite impressed that they built some of the technical components of the platform, notably UnaPractice, DoctorUna's clinic management system. Haj Ali believes that DoctorUna has been successful so far, and claims that it was launched at the right time, explaining that "there is a great demand in growth for healthcare in the region, this created opportunities for new healthcare professionals." DoctorUna has also achieved a few victories that certainly will pave the way for further success. They have partnered up with Etisalat Egypt as their "Medical Partner for patients requesting to find doctors through their call center." They also were awarded "Online Business of the Year" by Gulf Capital in 2014. A third huge feat was DoctorUna expanding out of the UAE to Kuwait, Jordan, and Egypt this year, after just three years in business.

When asked about the platform's marketing strategy, it is no sur- prise that most of their efforts were focused on the online front. While Haj Ali says that "social media is certainly essential to enhance the digital footprint of DoctorUna.com," she also believes that by itself is not enough, and hence they also focus a lot on SEO (search engine optimization) and SEM (search engine marketing). When asked about the most effective social media platform, the answer depends on the market. "We tend to find Facebook more popular in Egypt and Jordan, whereas, UAE and Kuwait are targeted more on Instagram and Twitter." When the CEO and her team aren't busy working out their online marketing strategy, they focus on DoctorUna "being visible in health-related events."

So what's next for DoctorUna? I probably asked at the wrong time, given that so much has been happening for them, from their regional expansion to the launch of UnaPractice, but they haven't stopped just yet. DoctorUna now has an app for tablets and phones for iOS and Android systems. Oh, and yes, BlackBerry 10 users, their app is compatible with your devices as well. Looks like the doctor is in!