Driving Economies: Breaking Down The Significance Of The Global Tourism Industry

Tourism is a leading economic driver for most countries around the world. In 2019, travel and tourism accounted for 10.4% of the global gross domestic product (GDP) at US$9.2 trillion, though the share was halved to 5.5% in 2020 due to the COVID-19 pandemic's restrictions on mobility. However, the World Travel and Tourism Council expects the sector's contribution could reach $8.6 trillion by the end of 2022, just 6.4% down from pre-pandemic levels. 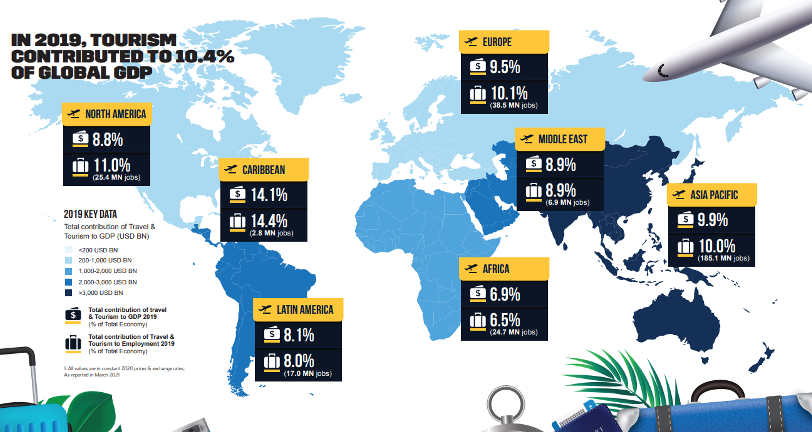 For many countries around the world, tourism is a key economic driver. In Macau, China for example, tourism contributes to 48% of the country's GDP. In the Middle East, tourism accounts for up to 12% of Jordan's GDP. The number of countries earning more than $1 billion from international tourism revenues nearly doubled since 1998. Travel and tourism also contributes to 8% of employment around the world, contributing to 330 million jobs worldwide.

Most international travel is driven by leisure tourism for recreation and holidays, which accounted for 55% of all travel in 2019 (which grew from 53% in 2016). The next largest segment was those visiting friends and family (VFR), as well as health and religious tourism– which accounted for 28% of all global travel in 2019. In addition, one in ten international visits were business trips. The only region where leisure travel is not the predominant reason for a visit is the Middle East, where VFR, health, and religious tourism leads. 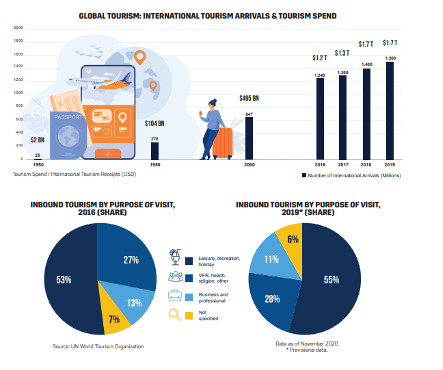 The Kingdom of Saudi Arabia has much to do with the latter, as it welcomed 17 million religious tourists for Hajj and Umrah pilgrimages in 2019 alone. Pre-pandemic, tourism grew the fastest in the Middle East region, in both number of international arrivals and in total tourism spend, where Saudi Arabia remains the second most visited country in the region.